I never said anything about that

If you’re annoyed I didn’t

I interpreted it as you toeing the line to a point where you found a comfortable spot where you can annoy people while not breaking any rules.

Also btw when I was referring to your admin feedback thread I wasn’t just referring to the stuff I said in it. I was also referring to everyone else and what they wrote.

said it on discord but maby some actuel links/citings for actuel points on why your making this? Its pretty vague and I dont wana have to read admin thread to interpret it myself what he did wrong 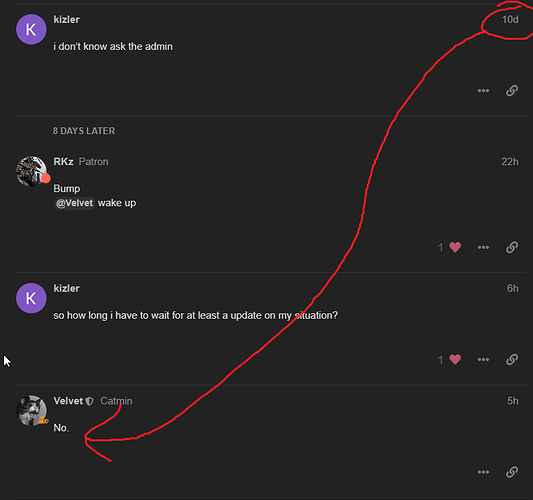 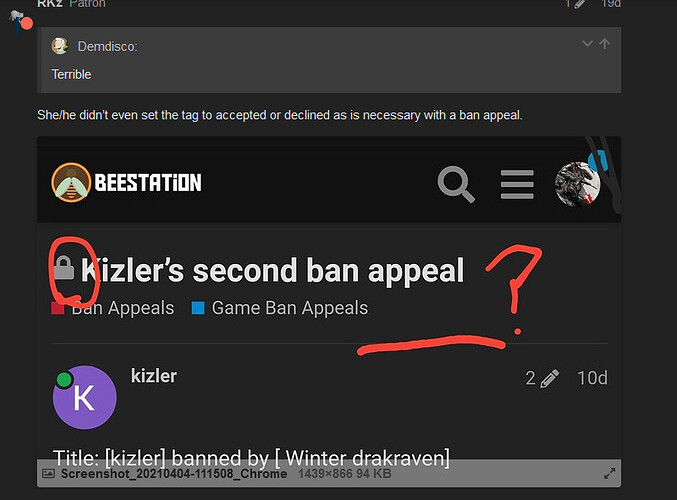 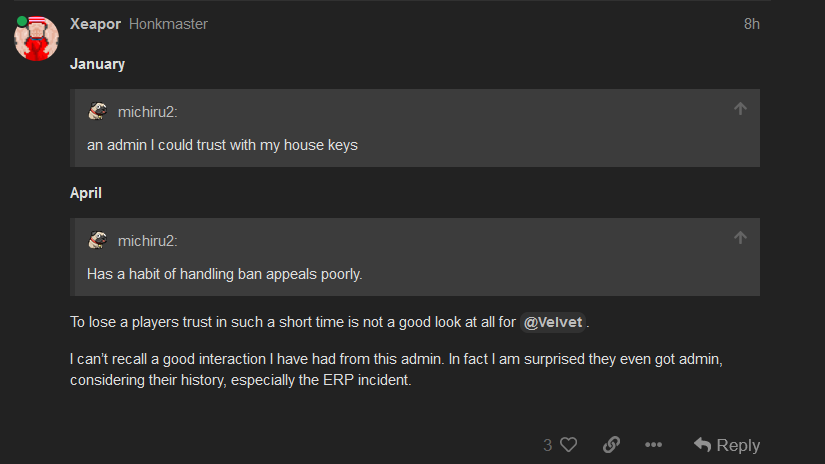 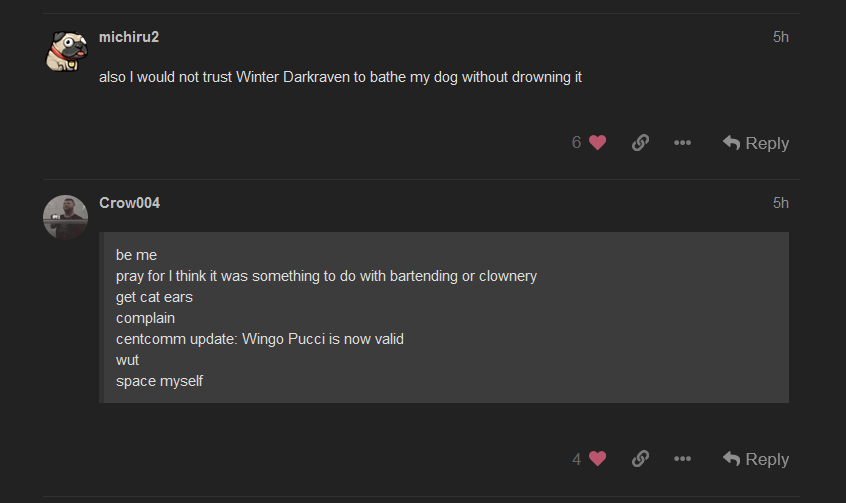 @TeomanTheGreat_Phil has already linked it, but read over it if you haven’t

Again. If he makes a case aka a report he shoundlt leave a link to a general feedback thread and say “good luck”. he should show examples what piss him off specificly/what he did wrong and then maby use thread as more indicator on that he isant alone.

You dont go to court “cuz we generaly dont like you”

Look at the reply i edited above. I got you your examples.

Yeah from the stuff you provied I can deffintly say thats very poor admin conduct generaly. Espepecialy on MRP. I havent had many run ins with him of this nature but I generaly never have run in with admins so maby thats why.

Ok but [THE INCIDENT] is one that really should be a point for consideration, even if it is old(er). That related to a rule which stood here for quite a while, and is one rule here that is generally well regarded(compared to filter, etc.).

I can’t really speak for anything else in this thread, but the incident is very much a standout.

If you are gonna do this do it by the numbers Here are all the appealed bans (that i could find) where the banning admin was winterdarkraven (velvet) make of them what you will. Do note that there are lots of unappealed bans and there is little point in tracking those or using them as an argument as much.

This ban does seem kind of weird, personally I try to request a few different things like that from xenobio as a miner to help out. Mainly just slowdown potions so the mining hardsuit is useable, what ever core provides passive healing, chill potions, or getting the potion that allows you to space-proof your clothing.

CKEY: skane10634 Admin’s CKEY: winterdarkraven Is this for both servers or just one? If so, which one: Sage Which server did the ban happen on? Sage Ban Type: Temporary Ban Length: 7 Days Ban Date (4/20/2021) 7:44 PM EST: Round ID: 28988 Ban Reason: Powergaming/Self-antagonism. Used a flamethrower because they wanted to defend a player and themselves. No. Appeal Reason: ERT were deployed and harming the Captain, of which there were two; the Cat captain being a cat was the one I…

The smite was overkill. Do not break into Brig with a mob. Security are allowed to use lethal force on a mob storming Brig, they could’ve murderer anyone and I wouldn’t care – it’s allowed. Everything in this situation was in your favour. You were released from a wrongful sentence, given a better shotgun, and let go without a single charge. Yet, you came back for not even revenge. There was nothing to avenge. If you haven’t learned your lesson, take a few more days to think about it. Love t…

CKEY: Trevic Admin’s CKEY: Winterdarkraven Is this for both servers or just one? If so, which one: All Ban Type: Game Ban Ban Length: 2 Days Ban Date (MM/DD/YYYY): 14/03/2021 Round ID: 27910 Ban Reason: “Self-antagonism. Killed two players because one took the captain’s ID while he was tiding to get it. You aren’t entitled to the spare. Killed another player for trying to save the other.” Appeal Reason: So I would like to point out, Clown took the Spare out of the ID Console while i was…

CKEY: SiurMaster Admin’s CKEY: winterdarkraven Is this for both servers or just one? If so, which one: both Which server did the ban happen on? golden Ban Type: server Ban Length: 1 day Ban Date (MM/DD/YYYY): 20.03.2021 Round ID: 28084 Ban Reason: Used a fireaxe to smash into HoS office and loot the locker, and warden’s locker, then CMO’s. If you want to cosplay as HoS, play the role. Appeal Reason: Quote is from ruko himself from New rules discussion - #9 by Demdisco [Bez t…

edit: this happened on the escape shuttle while in transit not before transit

CKEY:leestriter Admin’s CKEY:winterdarkrven Is this for both servers or just one? If so, which one: both Ban Type: botany job ban Ban Length: 1 month Ban Date (MM/DD/YYYY):2021-03-03 10:45 Round ID:27556 Ban Reason:Botany antagonism and grief. Used explosive plants to open Bridge, Vault, and departments because they wanted to get inside. Already warned for botany issues. Try other jobs. Appeal Reason: The “already warned” was 2020-06-23 06:03:55 | bs_golden | Dallen9. I do not believe a …

My understanding was that if it’s part of your job you should be allowed to make it, and the mech guns being moved to the security lathe was a design change to that effect.

We don’t accept appeals created and made behalf of other players - The person who was banned is responsible for making their own ban appeal. I’m going to mark this as denied until they can make their own appeal and explain it in their own words. Appeal denied

I’ll be honest I also think that a clown walking around dual-wielding flamethrowers is, in itself, really fucking funny, even if he doesn’t use them. The fact that he ended up setting himself and nobody else on fire only makes it funnier.

The_Clapper Winter Darkraven One Golden Temporary 1 Day 1/24/2021 26418 Repeatedly breaks into HOS’ office, already told not to steal HoS gun. Stop acting like an antagonist when you aren’t one… So, I really feel like this ban was unnessesary at the very least. I was warned, but what the admin fails to mention was I followed the warnings. The items in question were in fact the HoS’ gun the first time, but the second time it was his hardsuit. Already I feel like I’ve put way too much det…

CKEY: Toogrand Admin’s CKEY: Winter Darkraven Is this for both servers or just one? If so, which one: sage Which server did the ban happen on? sage Ban Type: not perma Ban Length: Ban Date (1/24/2021): Round ID: 26417 Ban Reason: Self Antagonism and powergaming. Stole hierophant from a cuffed miner because they wanted it. Hierophant is a unique item like Krav Maga. Appeal Reason: i belive this ban to be wrong Additional Information: i took the club and they are like yOu cAnT jUSt dO tH…

I did get it wrong. I’ve been meaning to contact you but I can’t find you on Discord or in game. Tell me the ones you want and I’ll fix it.

Title: [YeemanRuss] banned by [Winter Darkraven ] **CKEY:**YeemanRuss **Admin’s CKEY:**Winter Darkraven Is this for both servers or just one? If so, which one: Which server did the ban happen on? Ban Type: Job Ban Ban Length: 3 Days Ban Date (MM/DD/YYYY): 01/07/2021 Round ID: 25825 Ban Reason: Grief. Drugging players with neurotoxin as a non-antagonist role Appeal Reason: I am banned on Golden, wich has no rules, apart from escalation policy, for an offense i commited in Sage Addition…

Id like to think this got handled back then, it counts as a point but that horse got beaten. And I argue that closing reports/appeals on your own bans is much worse

We dont talk about [THE INCIDENT]

An anonymous source just told me that Velvet murderboned on MRP without hijack or martyr.

I went ahead and compiled any “abrasive” or “No.” posts that may be relevant to this report since @Velvet has joined the team. They’re not as plentiful as I was expecting given the testimonies found in the the staff feedback thread. I have never interacted with them at any length ingame, besides one encounter where they were able to assist me and I took note of their active interaction as CC, but from what I’ve seen they handle themselves appropriately. 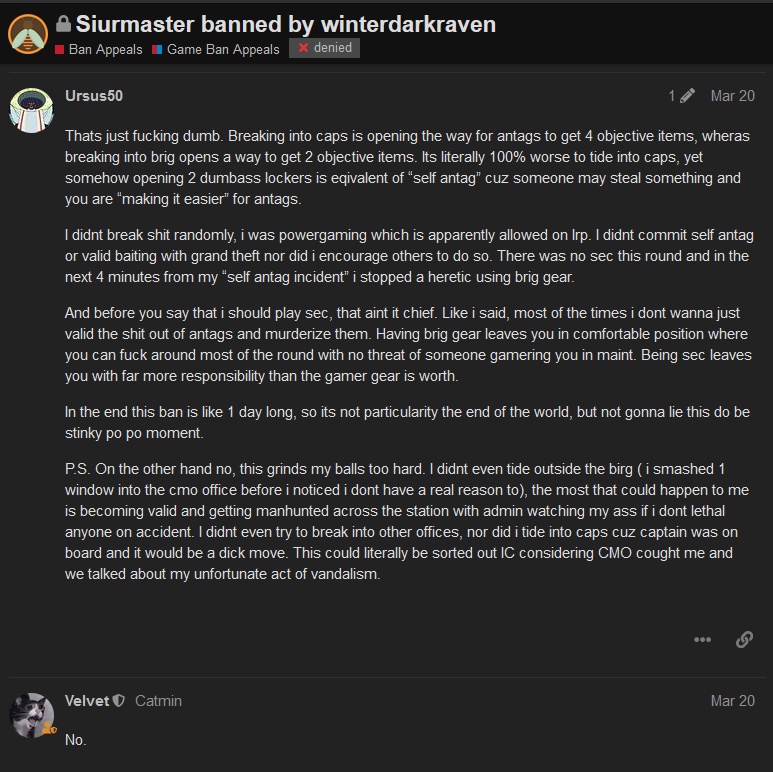 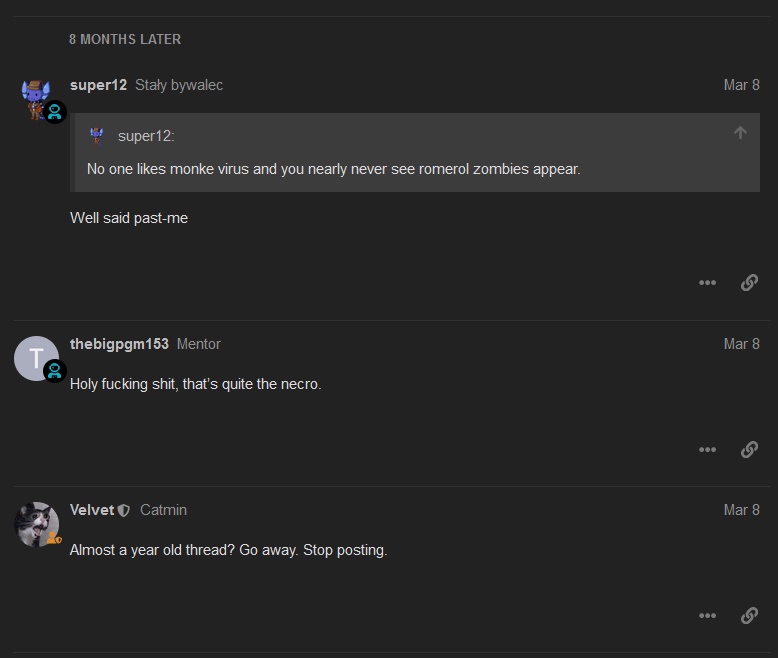 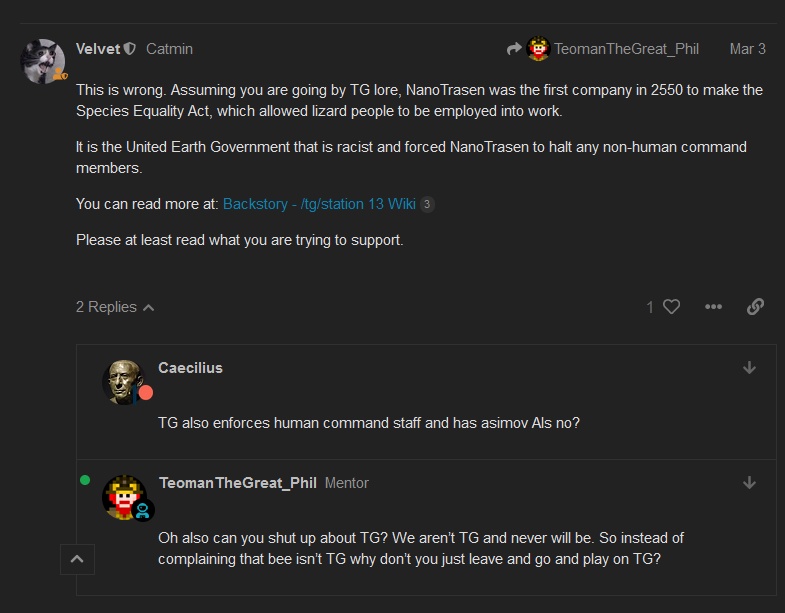 I also got bored and decided to go over their discord chatlogs, OOC chatlogs to about last month and everything was very vanilla. They bragged about killing players which didn’t sit right with me personally, but as far as I know they did so within the confines of the rules. It’s strange to see the public opinion shift so quickly and I’m concerned it could be an unintentional bandwagon. 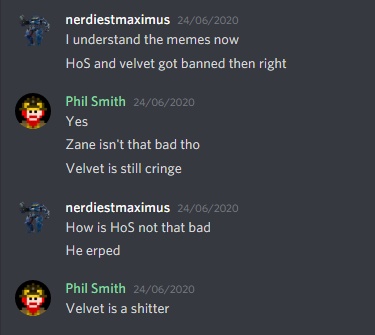 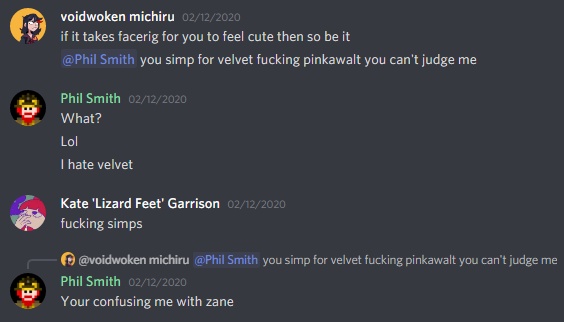 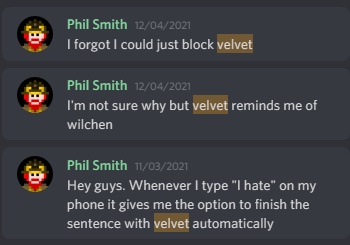 CKEY: TeomanTheGreat Your Discord: TeomanTheGreat Offender’s CKEY: WinterDarkraven LRP or MRP server: MRP Offender’s In-Game Name: Ferris Rider Date (MM-DD-YYYY): 11/15/2020 Round Number: 23978 Rules Broken: Rule 5 Incident Description: I decided that I want to shove Ferris and take off their pet collar. A random bystander starts shoving me and after a while, Ferris shoves me and decides to jab me with a syringe full of morphine. I then fall unconscious after …

This one was on a thread about a guy on lrp breaking into hos office to take some loot. As he said in the appeal he didn’t take any high risk items and gave a response. After some back and forth his reply in this screenshot happened and then velvet replied to it with no and closed the appeal which funny enough you didn’t include (I’m referring to the appeal being closed when I say you didn’t include something).

This entire thread is a disorganized mess full of unsubstantiated saltposting and needless dogpiling. The initial report itself was seemingly made in bad faith and is hardly conducive for a proper admin report.

I can see some items which may warrant a further investigation, but as a whole, this thread isn’t useful as a report. If people want to make reports for specific recent incidents, then we can certainly handle those. But having a “mega-report” filled with smaller reports that date back to last year isn’t actually useful.