Title, they simply aren’t good for RP and regularly are against encouragement for RP.

You can have a perfectly good, IC reason for having a certain name but then you’ll be bwoinked and told ‘this name doesn’t work’ even though you’ve played the character for a long time and developed lore for them, which all gets thrown out the moment you’re forced to change names to ‘fit the standard’ Hasn’t happened to me yet, but it’s happened to many.

Instead of focusing on things that would improve/encourage RP more we actively go against or flat out remove certain aspects because ‘muh RP’ yet we still stand as an anti-RP rp server in retrospect. It’s disheartening, and it’s no wonder some of our most active or iconic players barely touch the server anymore.

which name got you appearance banned 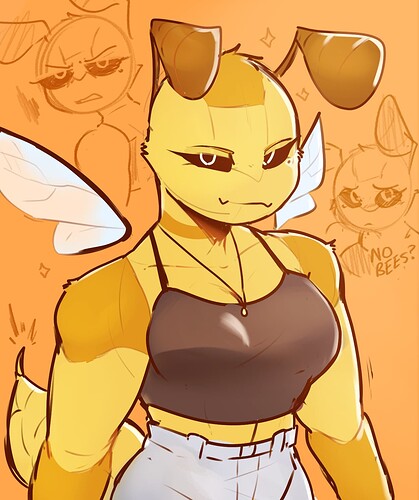 Tfw a funny moth name gets swifter admin response than a secoff running around on green with an incendiary shotgun.
And yes i agree. The naming conventions suck and quite literally hinder rp instead of helping. It drives people who make unique names that even SLIGHTLY deviate from the norm away in favor of lrp players who don’t care about their names or aren’t static to begin with.
Do you want people to rp or not, beestation?

Deleted bc it didn’t reply to the right person.

The naming guidelines are legitimately the reason why absolutely 0 plasmamen are memorable to me and why most moth players are completely forgettable.
The restrictions make people’s names look more default than unique and that’s a huge problem if this place wants to act like an rp server.

This is what… #3 now? Last one just timed out recently so keep it up

How important should naming conventions be on Bee? General

This is a topic I figured I’d ask here since it seems that the name guildelines are one of the more stricter rules on Bee. We all know that calling yourself “BAN EVADER” and “Bill Science” is epic and funny but I’m more asking about the species specific guildlines. Lizards must aways be Verb-The-Noun or related to elder scrolls somehow Plasmamen and Ethereals must have name related to chemistry or mythology Oozeling must always have a colour related name with “son” at the end of their s…

I’m sure you could tell what I think.

Name Guidelines on Bee are more sticker than most HRP servers and the reasoning I was given as to why didn’t really seemed justified to me to be perfectly honest.

The main problem people seem to have is that if we don’t have stick rules we’ll have people named after references or so on. There’s also seems to be a dislike of players using names that are unconventional to their speices. i.e. a lizard named Jonathan Ashkin.

I feel that the current state of rules with names are both outdated and seriously limiting on people.

I understand that seeing a human name on a lizard isn’t exactly the most creative idea ever but why disconrage it like that? Like others have said, it causes everyone to be named simliar to each other and makes everyone forgetable, not to mention how it effects roleplay.

It’s come to the point that if you want to play your character with the name you want them to be, you have to be a mime/clown main since they are the only roles that allow for the leeway in names which is frankly ridiculous.

I’ll preface my comment by saying that I don’t think this is a MAJOR issue, but.

The current name guidelines provide no real depth to the species (at least how they are played), they are gimmicks at best.
They are just an easy and very flawed way to differentiate the species, since they are mostly reskinned humans.
No species has a specific culture, traditions or history that can influence how you roleplay your character (as of right now), common lore is very barebone in this regard.

The best way to solve this issue is by helping expand common lore, I believe.

I will still enforce naming guidelines as an admin, but I disagree with having them be this strict.

The best way to solve this issue is by helping expand common lore, I believe.

I would agree that it would help, however many of the gimmicks are so specific that even with lore I would have trouble accepting that an ozzeling needs to have “son” as their surname or an apid names to have a bee-pun and so on.

The best way still seems to me is updating the guildelines so that they are less stick.

I’ve seen HRP servers like Skyrat be a lot chiller with naming compared to Bee, bad or meme names should still be dealt with, of course, but bwoinking people because they don’t have “son” or “dottir” on their oozeling’s last name or be cause their apid isn’t a pun name is kinda ehhh.

do not show martin that image he will flip out

however many of the gimmicks are so specific that even with lore I would have trouble accepting that an ozzeling needs to have “son” as their surname or an apid names to have a bee-pun and so on.

Well, naming would come later if I have to be honest.

As of right now there isn’t even an apid document (at all!), their entire culture, impact on the galaxy and relations to the other species still need to be defined.

Work on lore is slowly going forward, but could always use more writers who’d be willing to contribute to the project in an organized fashion.

Yeah, again, I’m terribly sorry to hear about that, and I hope you aren’t too personally affected by it. You were an enjoyable character in the rounds I got to be in with you.

But yeah, while I can agree with ensuring that names don’t go TOO far off of practicality, and some convention can generate some ideas, strict enforcement of those rules really do stifle creativity and diverts too much effort to skewed priorities. Along with what everyone else has already said. Meme names and distracting references, I can agree with. Everything else? If it ends up alienating cherished players who were otherwise fine, then it’s too much of a price to pay for the wrong direction of what those guidelines are supposed to uphold.

Yeah, again, I’m terribly sorry to hear about that, and I hope you aren’t too personally affected by it.

Thank you, I’m doing my best right now. Did some working out but I’m still bummed. I’ll be taking a break from SS13 for now.

I swear it happens twice a week at this point

Fuck, I miss him so much already.

Here’s when a couple of moths and him (left) decided to randomly stare at a lamp for awhile. 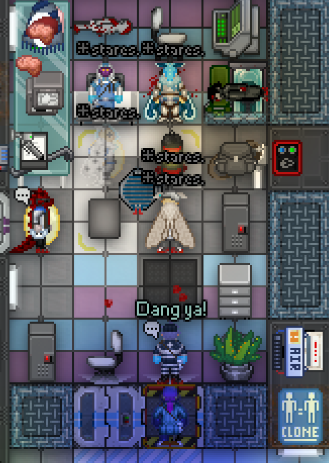 Here’s the largest custom bar he ever made. 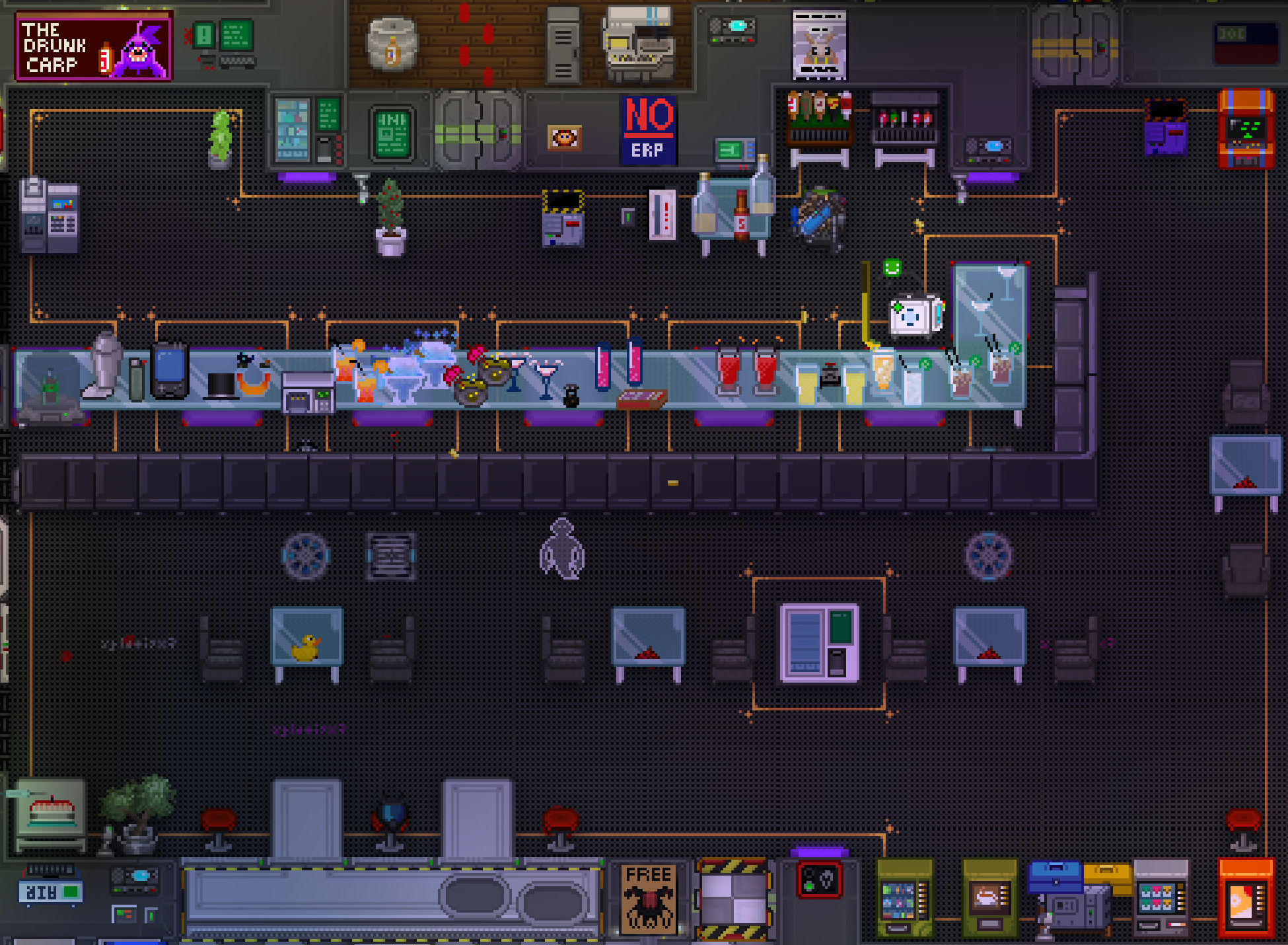 This is when a HoS stood him up on Valentine’s day after he worked hard on the room for their date. 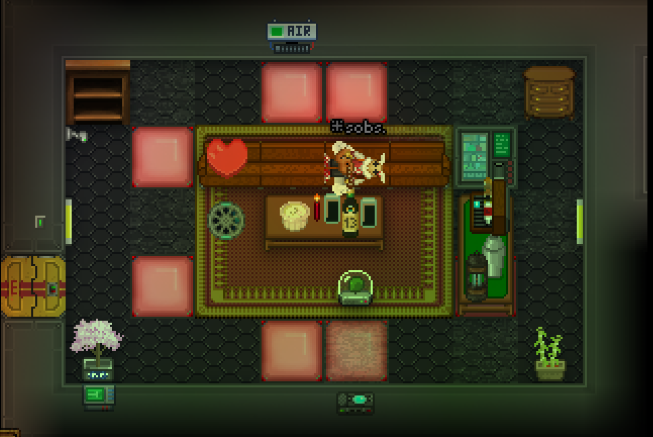 One day a new clown on the server wanted something to do, so Cords taught them as CE to construct things and draw. Gave him permission to redecorate the Engineering lobby for crew morale. 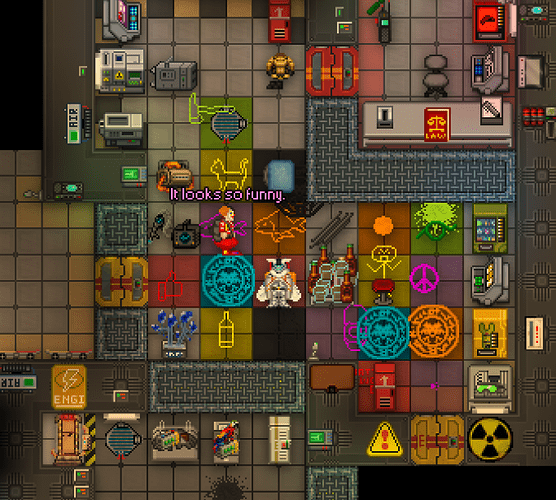 They then skated happily through the halls together as everything was perfect in Engineering. 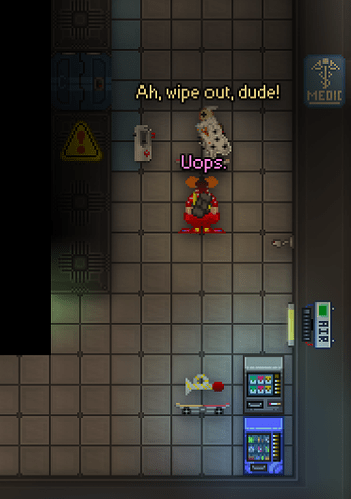 Trying to spook people as a ghost!! 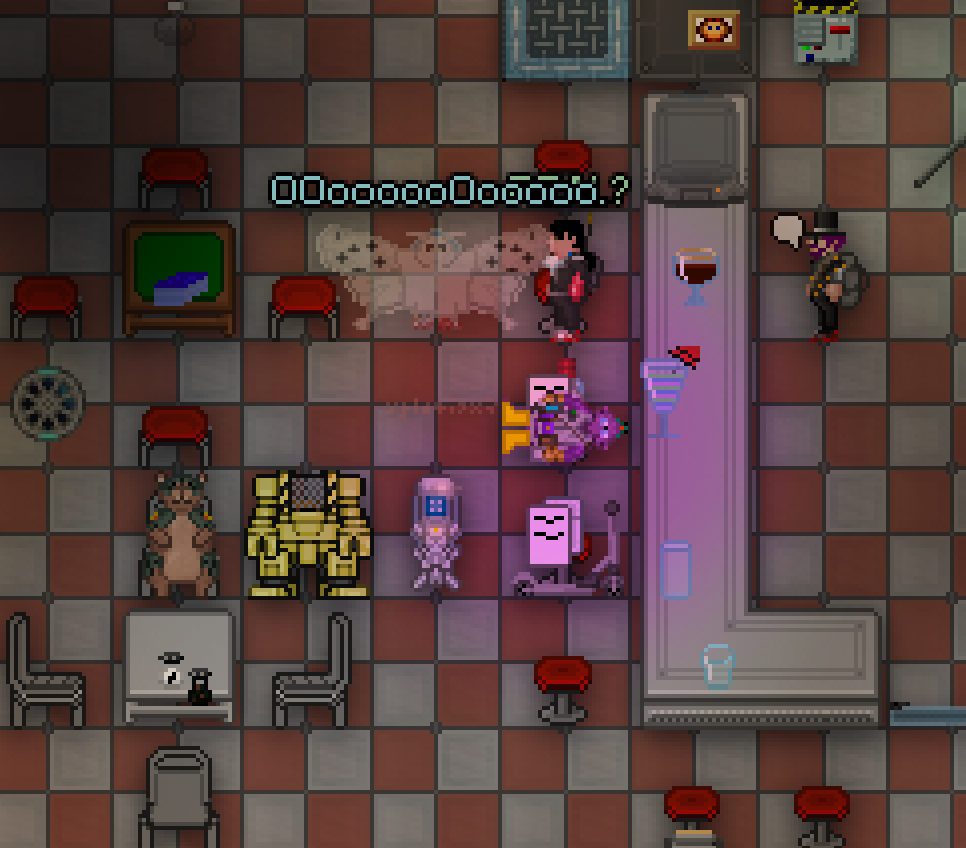 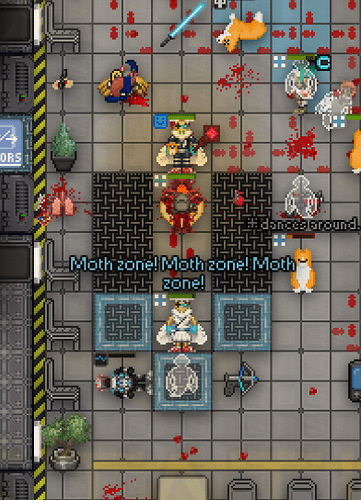 A mining pal and him take it easy and dance a little. 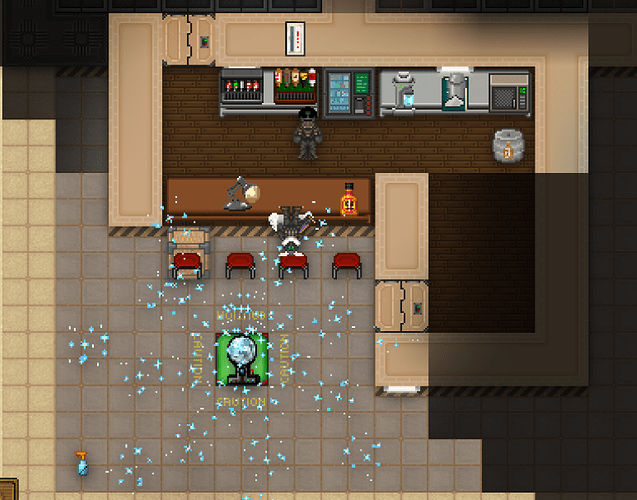 After upgrading the brig medical on a slow Fland greenshift, he took the time to redecorate evac lobby. 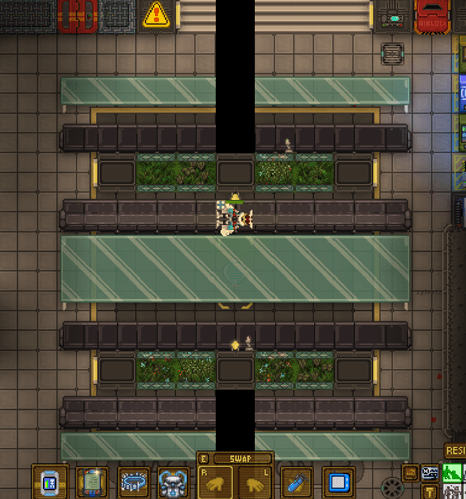 His carbon copy got gigantism while he took dwarfism, an iconic duo! 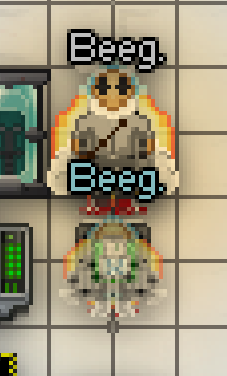 RD and an Explorer in space with Cords, RD didn’t have anymore oxygen… 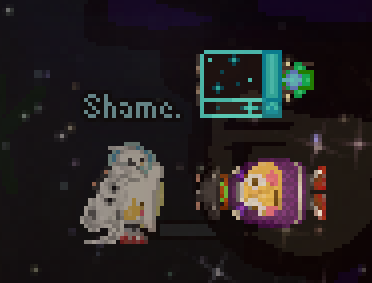 Cords only successful Valentine’s date, he was so happy!! 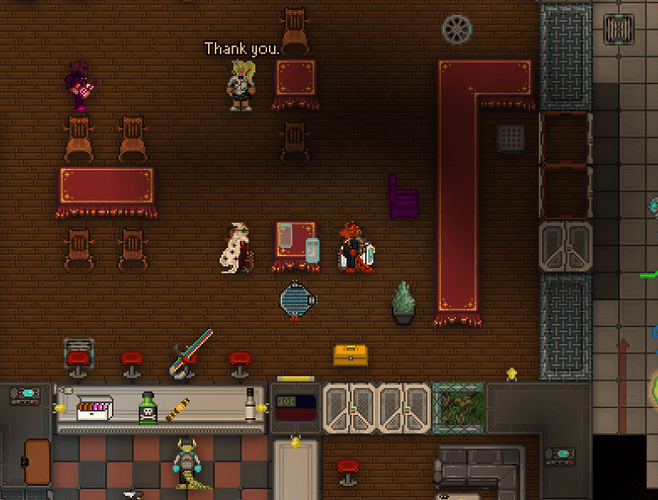 Bluespace Banana sent him into the Captain’s bedroom, no escape! 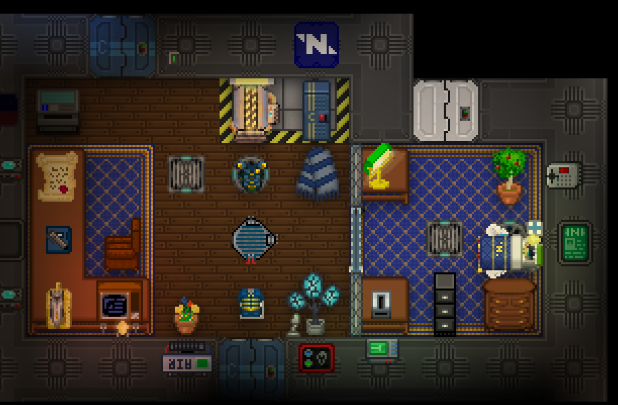 HoP wanted to get down, why not? 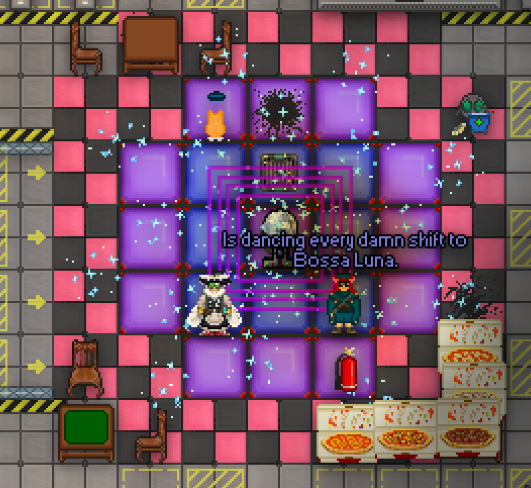 Cords Sensei of the Purple Court gave him training here, he learned much from his master. 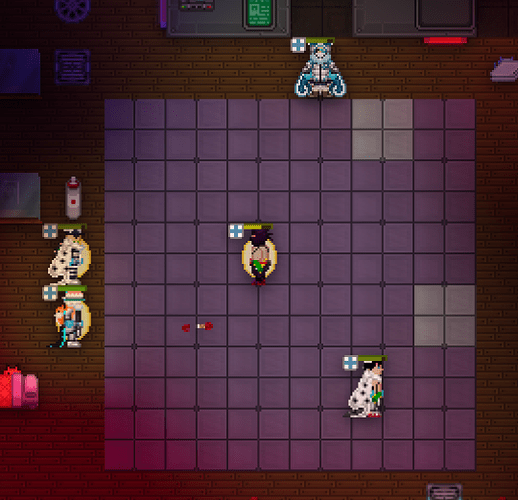 QM cleared a crab army to be wrought upon cargo bay! Many crabs did not survive… 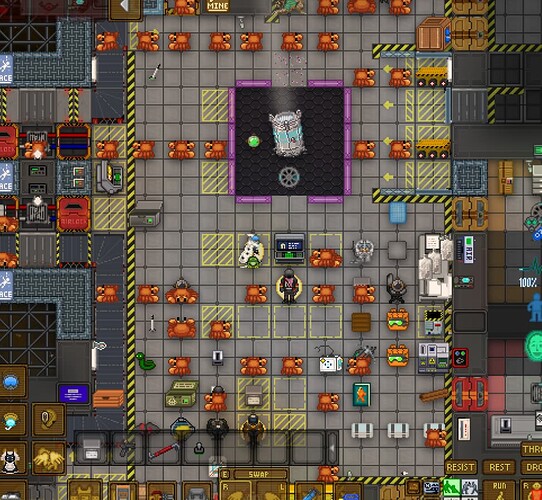 Everyone was boogying down until Forgets lost her hair!! Cords got her a new wig, though. 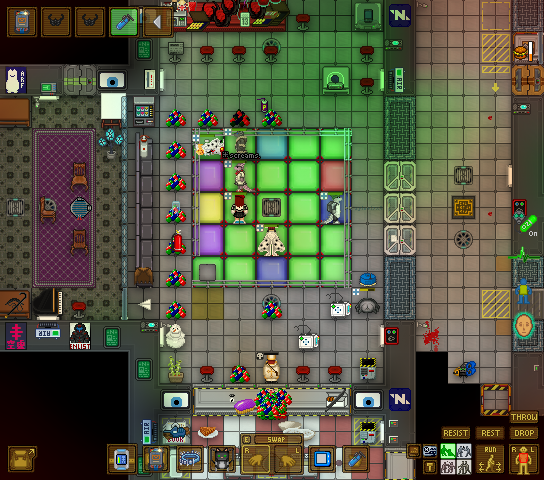 Decided to sleep on a bed while I went to the bathroom for a minute, came back to the snore hall! 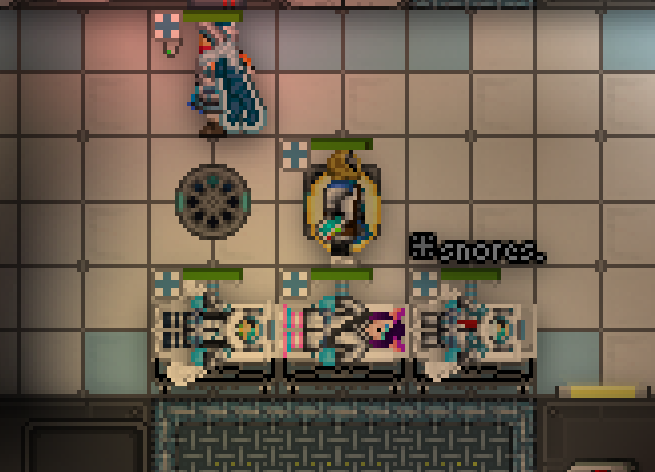 The moment he died from a meth overdose after having turned into a moth. It was his first moments being biological and he took his shot after a scientist handed him a funny pill!!! Forgets saw his entire transformation and the ensuing repurcusions. 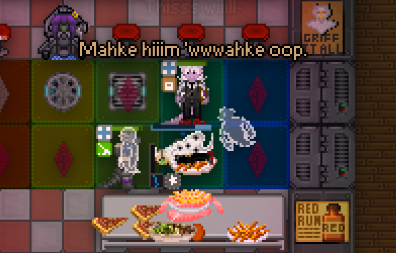 And this is his first picture as a moth, the round he turned from an IPC into one through probably toxins, I never knew what did it. Back when he was still CBOS. I was so excited. 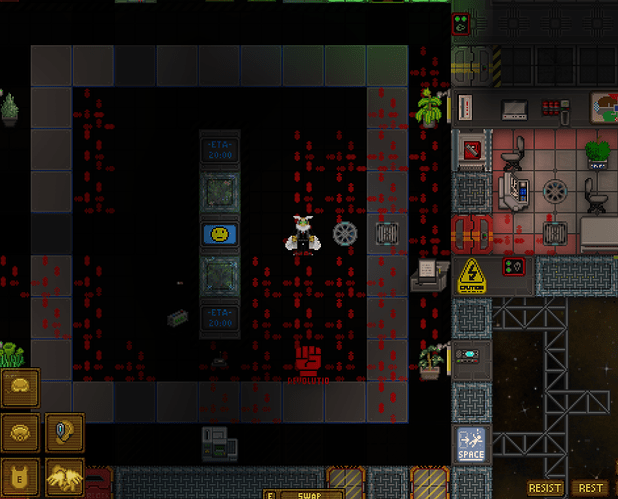 There’s a lot more I could share, but I’m really bumming myself out more. Please enjoy these few moments of Cords memories.