just gonna keep posting about it. admins have made an inconsistent effort.

not much to discuss here, which works bc my posts about golden tend to get locked…bc ppl who see no value in lrp tend to blame lrp players for the server suffering.

Admins have attempted to solve Golden’s issues but a loud minority of people scare them off when their metafriend gets banned. If the only feedback these admins get from the place they’re trying to help is negative, don’t expect them to stay.

Take the good with the bad and give them credit when they do something you like. If you want them to stay, don’t yell at them over meaningless bullshit >:/

idk what the admins think. no one says anything, and i don’t even think they need to be prompted to do so. that’s what it makes it seem like indifference and that…really brings out the hostility in me

so i am trying to be nicer but I’ve already built this entire rude bitch online persona. however i don’t actually think being combative is helpful, even if it doesn’t literally contradict what i’m saying. it’s why i think chilling out w the combativeness is prolly wise at this point

also i’m a genius. ppl need to know this. jk

Admins have attempted to solve Golden’s issues but a loud minority of people scare them off when their metafriend gets banned. If the only feedback these admins get from the place they’re trying to help is negative, don’t expect them to stay.

I think that’s an inaccurate portrayal of Golden’s struggles right now. The primary issue is a lack of admins being present, not any particular members in the playerbase. It’s a hotbed of multikey banevasion and nonantag mass killing, grief, bombings, delaminations, silicons ignoring laws to murder, sec doing comply or die executing people objecting to them looting, etc. This is done almost entirely by people that have already been banned and have nothing to lose, which makes LRP attractive because they can’t be stopped and by the time a player report gets filed they’ve already gotten onto a new key.

If you go into the server thinking it a problem with players rather than consistent staffing and moderation, yes, you’ll go in with a heavier hand trying to apply an active solution when the biggest contributing factor to successful administration is a passive one (i.e. staffing). The players(people here to play, not to grief) largely moderate themselves IC, and while occasionally regulars can be annoying or walk a fine line with the rules, they aren’t doing the mass nonantag killing, sabotage, etc that can be so awful.

The most necessary intervention is having an online admin that is capable of removing the multikey banevaders from the round that cause mass disruption to the server as nonantags for the sole purpose of causing mass disruption. Simple problem, simple solution - the challenge to the administration team is either drawing lots on who goes to cover MRP or hiring new staff, which is where they seem to let the perfect get in the way of the good.

If you hire an admin that doesn’t apply as many or as harsh bans as you want, what do you have to lose when the alternative is zero enforcement? From what I can see having poured over a lot of successful and failed applications, it seems like the more heavily roleplay oriented personalities are far more conservative and not going to be in line with that approach, and it’s a bummer.

I have a suspicion, though it’s purely speculation, that one of the motivations behind the major ban evasion grief on LRP is gripe with admins and bans from MRP. It seems implausible that their goal is to grief the 12-20 players on Golden, but more to grief BeeStation as a whole. My thesis is that if they wanted to create a headache and more work for the admin team, forcing staff to go through old logs on a wild goose chase while people complain on the forums, they’re accomplishing their objective, so to speak.

idk if i agree with you? if we’re talking about ppl who self-antag, then the majority is definitely not multikeying hackers? there are plenty of self-antaggers on golden who have no idea how to evade perma stickybans. the one guy who i know does this, doesn’t come around that often at all

(btw props to that guy he seems like a great hacker)

but i do agree with:

A) golden mains are not self antagging on the regular. this is just a false narrative that’s been contributed to by admins, sage players and golden players. the reality is if u took time to get to know golden mains, ur not gonna walk away thinking “this bitch is a gatekeeping, self-antagging OP greytiding cunt!”

B) admins, by comparison to mrp, are only present in spirit. this would be ok but unfortunately, ahelping via a ouija board and a glass cup does not yield the intended effect. really, it’s kind of confusing. ahelps are gonna be less vague compared to mrp, and ur gonna have more freedom to adminbus. it’s not objectivity to say adminning on lrp sucks bc of lowpop, and that’s mostly because it doesn’t really seem like it…sucks

anyways. admins do have a perspective that players don’t have, so their opinions on the matter are valuable

If you hire an admin that doesn’t apply as many or as harsh bans as you want, what do you have to lose when the alternative is zero enforcement?

yeah it’s pretty clear that u need to be trustworthy to be an admin. i wouldn’t reccomend sacrificing that just so we can have more Lrpmins, but i would recommend being more lax to golden server admin apps.

Is it neglected? Not actively. But the Admin team is made up primarily of individuals, several of whom are either ambivalent towards, or outwardly dislike LRP. Take one look at any player report/ban appeal that more than 3 admins have commented on and you’ll see that the admin team is no way a single, cohesive group. The admin team, and beestation as a whole, essentially is driven forward by motivated individuals that each bring something different to the table. There really is no major driving force towards or against any one thing, but the individual apathy or disgust does end up translating into neglect, and a perceived overall hatred of LRP, which serves to further fuel the flames between players and admins.

Is it neglected? Not actively

i’m definitely hearing what you’re saying, about them being made up as individuals, and not necessarily functioning as a group. but there’s certainly groundwork that supports cohesiveness.

Remember when lrpres were literally yelling for the admins to get out of golden because they were actually enforcing the rules? Good times.

But seriously, is golden neglected? Yes. Is it good that its neglected? No.

But is it surprising that its neglected after all the attempts to administrate it were met with pitchforks?

yeah i’ve been a part of that. whoops

i think ur mostly referencing the whole “admins enforcing mrp rules on lrp” thing. yeah i agree. whether or not a mistake was actually made, it’s bad to pitchfork an admin. and i’m sure that’s happened lol

But is it surprising that its neglected after all the attempts to administrate it were met with pitchforks?

ok this is getting old. neglect has done substantially more damage than rude players. neglect was not a justified response. u and velvet are pushing this biased idea of ‘being nicer to admins’ like it will make all the difference. it will not.

i recognized what you said as a legitimate problem that shouldn’t be happening. but it is not the main issue here! you don’t treat the symptoms and expect to be cured.

If you want them to stay, don’t yell at them over meaningless bullshit >:/

in the context of golden as a whole, this is literally misinformation.

u do not know me, velvet

its a conspiracy to keep the golden lrp chads AAless. rise up. open all the doors

Please stop making this about you

Bit off topic but @sole2299 what happened to this?

alright i responded appropriately lmao LOCK IT UP

If I get Admin ill stick to gold and gold only, dont have enough hours yet though 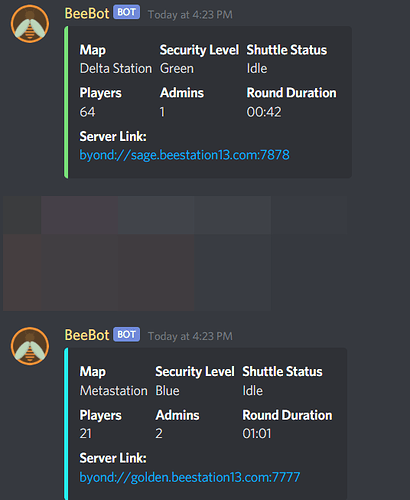