Hello, once again we find ourselves in a topic suggesting this. Some of the more frequent questions for why do we need this and such can be answered as follows:

So, do you think the game would be improved with the addition of IC notes?

I wanted to make something like this a long time ago, but forgot about it when college picked up on the work load.

I think it would be very reasonable from an IC perspective that NT would do some basic vetting in their experimental plasma research station (if people want to). 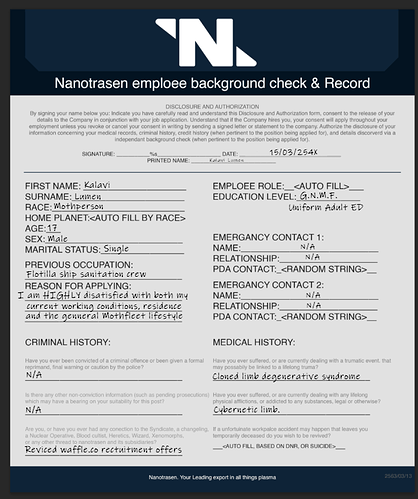 Once upon a time, 15 years ago, Kalavi was a very simple moth, but at 32 years with close to half of that spent with NT have made a semi-jaded, though still uppity and well rounded employee.

“Do I have to fill it out? / What happens if I don’t?” - When Staff request the record it could simply be displayed as “lost/corrupted”. This too could be what happens if a non-crew pretending to be one has their documents checked.

Solid no. This is the first step on the slippery slope to eventually having characters meticulously sharing details about their every kink and preference for self-dick sucking

The reason I suggested to group them together, is so it can’t be used as a tool to identify a antag. I do imagine quite a few people will not fill this out. If 20% of a sever don’t, it wont be a relatable way to tell opting out, from a antag.

You’re just saying that because you’re conflicted about having Zaphod Beeblebrox as an emergency contact.

God, please yes. This would be lovely.

And an absolute nightmare to moderate.

isn’t most this game a nightmare to moderate

Nice idea, people would probably do it only on the forums to spice up their character they metafriend with.

It’s absolutely a novel idea, and a nice novelty for spicing RPs, but the formatting itself needs tweaks.
Not to mention the fact that the presence of many of these things being autofilled is sign enough that it wouldn’t be hard to tweak.

In fact, if you really wanted to, you could make this into a UI for character creation, if you were a maniac.

Amazing. Perfect. Inspired. A step in the right direction.

This ERP scare seems like more a hoax, why the hell would ERPers come to a relatively low-pop Beestation over Skyrat/Splurt? This makes no sense.

Also I think @BIDP pointed out that only 4 bans exist for ERP (two of which was just people baiting). I think its massively overhyped.

I remember all too well when the Lizard Twink gang first reered its ugly head on the server and i much rather not have anything of the sort happening again. Make no mistake, give this degenerate scum an inch and they will take a mile

my brother in christ, this is just an opportunity to develop a character on a roleplay server. This won’t make any more people start playing on bee one handed

This is a phrase I never thought I would hear. Maybe I haven’t been on this server for that long.

But the point still stands, saying that basic employee/medical/security records are going to lead to ERP is MASSIVE leap. Other stations like Paradise have stuff like this and they don’t seem to have massive ERP problems despite being massively furry. I’ve made this argument before in Gimmick system will be possibly refactored - #19 by Basicguy20 that roles like psychologist can’t ever be fully used unless there’s some way to see people’s medical histories (people who care to fill this out indicate they are willing to RP).

Uuuuuh? all I’m gonna say is that sentence has vibes all over the god damn place.