Yorii wants to be a trialmin

Your CKEY (Including any alts you have): Yorpan (I also have an alt called Yaoigirl but I don’t think it’s ever been connected to bee)

How often are you online to play/admin? (Timezone): My timezone is GMT+1 but I tend to play closer to American timezones. (i.e. late at night.) And since I work in IT I am always on Discord and will be able to jump on a server to handle urgent issues any day of the week.

What changes, if any, would you bring?: I probably wouldn’t try to change much, I kinda like how stuff is.

Why do you want to be an admin?: I want to help resolve issues and remove problematic elements from ruining the fun for other players.

How long have you been playing BeeStation?: Actively for the past few months. I have a very bad sense of time, but it has probably been at least 2-3 months since I realized this is my favorite SS13 server.

On a scale of 1-10, how skilled are you as an admin?: 3, assuming we’re talking about the technical aspect of adminning a SS13 server. If you mean as an administrator in general I am a 10.

Have you ever been an admin on another server? This is not limited to SS13: Yes I run a few discord servers as server owner, I also work as a senior sysadmin if that counts?

Do you have any alternate accounts on SS13? If so, could you provide their CKEY?: Yaoigirl

Your strengths: I am very easygoing and jolly.

Your weaknesses: I sometimes get sad when someone is trying very hard to make me upset.

Is there anything that gets you really mad, real fast?: Not really no, I can’t remember the last time I was mad.

What do you think is the most important trait for a staff member to have?: To be respectful and try to understand all points of view regarding an issue.

What makes a staff team good?: Cooperation and understanding eachother.

What is a staff team’s purpose?: Make the community and environment better for everyone in it.

What kind of player are you?: Pacifist trait. I enjoy simple things. (Roleplaying)

How do you think you will change once you become a staff member?: I might become more stoic, I’ve always wanted to be more stoic

The clown slips the HoS and steals his gun, spacing it right after. What do you do?:
Ask them why they did that and if they are aware about the rules regarding traitor objectives, depending on their answer and previous notes on their account I will give out anything from a note to a day ban, although a ban would be unlikely unless they have a history of doing similar things in the past.
If an antagonist does currently have the gun as objective I will return it to the HoS.

A non-antagonist is sabotaging the Atmospherics loop and pumping plasma into the distro, along with dragging around a canister and releasing it into the atmosphere. Assuming that another admin is cleaning up the after-effects, how do you conduct the ahelp with him?:
“Hello there, I am going to issue a ban for this self-antag behaviour, is there anything you would like to say in your defense?”
I would then ask to ban them for at least one day per each person killed and another day per each previous note regarding self-antagging or similar.

A chemist who is working alone accidentally mixes an explosive mixture inside of his chem dispenser, instantly killing himself and destroying the machine, along with exposing Chemistry to space. Nobody else was injured aside from him as a result of his actions. What do you do?:
I’ve done this screwup so many times myself it’s not even funny, I would probably not even note them if they seem apologetic and it’s obvious they are a new player. If there was extra time to deal with the ticket I would try giving them some guidance about chemistry.

Also here is this thing since I know you want to see that: 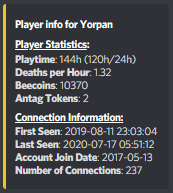 I also have a few hundred hours logged on tg if anyone is interested to see that aswell.

From what i’ve seen from you you’ve been a raher positive community member.
Answers are okay. Hours are on the lower end of the “150-200” range from the admin drive, however. 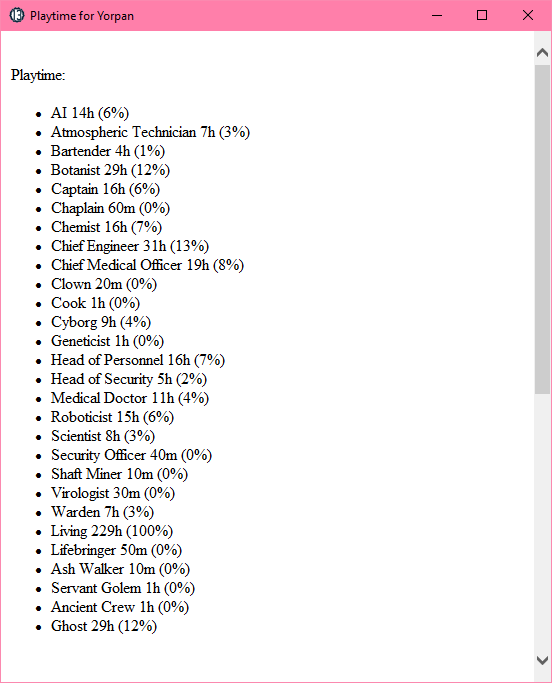 Please keep this on topic

Curious, why apply for admin first, not mentor?

when I had 200 hours I wasn’t accepted as mentor and I don’t really think people should be but this is for admin.

Curious, why apply for admin first, not mentor?

Two birds with one stone

get more hours and you will be accepted for sure

i had 450 ish hours when i posted my mentor app, got yeeted cause of notes, this guy is getting +1 left and right for being a cool person. I believe that but that doesnt make up for the lack of experience.

Well, combined between tgstation and beestation I have over 400 hours, and I have never received a single note, if you don’t count a few accidental icky ocky notes from tg.

I never used these words.

Over 400 hours without a single note? This guy’s the perfect candidate for mod staff; I interacted with them in MRP as well and they’re chill

I believe that but that doesnt make up for the lack of experience.

You don’t have to be robust to identify shitters. It helps with identifying smart ones, but it’s not often you get someone that [redacted] the entire station by putting [redacted] inside of a [redacted] after letting them [redacted] for twenty minutes.

I’ll come up with some questions when I can think of them.

I’ll come up with some questions when I can think of them.

Please make them as convoluted as possible, I love a good puzzle.

MRP - Traitor clown buys a clown car and emags it, he starts driving around the station scooping folks up and ejecting them through an airlock into space. His objectives are to kill a chemist, the Head of Personnel and to escape alive, but only the chemist is caught before the clown’s reign of terror is brought to an end.
You get a ticket at round end complaining how the clown didn’t have hijack or martyr objectives, but he murderboned. How do you resolve the ticket?

If it was clear that he bought this item with the sole intention of murderboning the entire station, I would start the bwoink informing him that this is not allowed unless specific conditions are met (martyr/hijack objective or being unable to greentext), which here clearly was not the case. I interpret the story as his intentions never came to reality, and only his actual assassination target met his demise. I think players should only be punished for the consequences of their actions, and seeing as this murderboning attempt was actually a failure and never got anyone outside of the objectives dead, I would give him a stern warning not to do this again, send him a link to the specific current rule explaining this in detail, and apply a note saying not to attempt roundstart murderboning without fulfilling the murderboning criteria.

MRP Greenshift - The SM has delaminated into a Tesla, but the station went to code red and most of the crew has miraculously made it to departures and the escape shuttle in time to get away from it. Players are rapidly losing health on the shuttle, many of them are vomiting. By the time the shuttle arrives, the only living player is an IPC engineer and tickets have begun flowing in about how they killed the whole shuttle.
How do you resolve the tickets, and how do you handle the player?

I’m assuming this is a trick question, since nobody would have any evidence that this specific IPC engineer actually caused this. I would not handle the player until I found evidence of tampering, I know you need to have both engineering and atmos access to perform this feat, so I would start by looking for the evidence of who might have caused it, causing a tesla delamination is not a normal occurrence and most players probably don’t even know it can be done. If the CO2 pumps and mixers are still not deleted by tesla, the last fingerprint on those would be the first person I bwoink.
For the rest of the question I will assume it actually was the IPC engineer that tampered with the atmos mixers (i.e. the pumps are still intact and sending CO2 to engineering). I would ask him why he sent CO2 into the SM. Now heavily depending on his answers any outcome could be possible, building a CO2 SM setup on a greenshift is certainly not against the rules if there is no malintent to speak of.
I would heavily weigh in the persons remorsefulness and hours spent as engineer into deciding how to proceed. If I am able to find in the logs any evidence of him disabling the cooling loop or somehow clearly performing sabotage actions, it is clear he was griefing and a longer ban (probably permaban) would need to be issued.
If it seems like an honest mistake from an incompetent engineer, a simple engineering job ban and a note would be sufficient.

LRP - Sentient slime is just vibing around the station when a shirtless assistant with a spear and sunglasses decides to end its existence for no reason. You see the slime complaining in dead chat about how they were killed for no reason.
What action, if any, do you take?

No action taken, all simplemobs are valid on LRP.

Actualy, driving the clown car into the SM is A OK.

Half a year later edit cause someone just hearted the post :
This is nolonger the case under our new rules

Also as a PS, for the second question I’m assuming the engineer is a non-antag, if he does have murderboning criteria fulfilled it is simply an IC issue if he decides to Tesla murder.