Your Discord Name (Including any alts you have):
xyzzy#2467

How often are you online to play/admin? (Timezone):
GMT-06:00
I make my own hours at work so I can theoretically be available whenever I want

What changes, if any, would you bring?:
I don’t intend to make waves, I just want the griefing on Sage to go away

Why do you want to be an admin?:
I’ve been watching Sage slowly deteriorate due to “lack of admins” among other things.

How long have you been playing SS13?:
At this point probably a year or two non-consecutively. My first Byond accounts are probably a couple years old, but I don’t have access to them any more.

On a scale of 1-10, how skilled are you in SS13?:
7.5
First thing I learned was medbay so my survival skills are top notch. I know how to clone plasmamen successfully and how to reive a husked miner without cloning if necessary. I have moderate knowledge of everything Sci/R&D, pretty decent knowledge of Cargo, a good understanding of how Security protocols are MEANT to go down, good knowledge on how to set up Solars and decent knowledge on how to set up the SM. I can’t claim to know everything about a 15 year old game that’s been spaghetti coded by a million different people but I have a pretty darn decent understanding of most of it.

On a scale of 1-10, how skilled are you as an admin?:
5
I’ve hosted private servers to mess around with things and learn things, and I’m moderately familiar with VV and other admin tools. That being said, using them in a live non-private environment is something I have yet to do.

Have you ever been an admin on another server? This is not limited to SS13:
No, I don’t normally seek power positions.

Do you have any alternate accounts on SS13? If so, could you provide their CKEY?:
Nyaakuza (already a thread about that). A bunch of throwaway keys I tried. I don’t multikey or plan to.

Your weaknesses:
Poor memory due to depression.

Is there anything that gets you really mad, real fast?:
Unfunny memes

What do you think is the most important trait for a staff member to have?:
Patience

What is a staff team’s purpose?:
To be an advocate for the playerbase and ensure the grand majority of players are having a good time. The needs of the many outweigh the needs of the few and all that. This is not, however, to be misinterpreted as overzealous gatekeeping or obessively protecting your personal playground. Give everyone a shot, but don’t hesitate to get rid of people who just genuinely want to ruin the experience for others and nothing else.

What kind of player are you?:
I prank, but don’t grief. I mostly take my role seriously with the occasional exception. I exclusively play MRP and I tend to behave myself.

How do you think you will change once you become a staff member?:
Ideally I won’t. Maybe a bit grumpier.

The clown slips the HoS and steals his gun, spacing it right after. What do you do?:
If it’s good and proper spaced, delete the gun and put it back on the HoS desk. More likely than not it was spaced vertically or horizontally and it’s easily retrievable, in which case I shouldn’t interfere because the HoS will know exactly where it ended up and has a hardsuit to retrieve it.

A non-antagonist is sabotaging the Atmospherics loop and pumping plasma into the distro, along with dragging around a canister and releasing it into the atmosphere. Assuming that another admin is cleaning up the after-effects, how do you conduct the ahelp with him?:
There’s no way something like this is a mistake or the player doesn’t know it’s a seriously lame thing to do, and they are absolutely going to be banned for it. The only thing left to decide is whether the ban is a job ban, a server ban, or a perma ban and that will be decided by the conduct of the player in the ahelp. I’d do my best to ask in a non-condescending manner why they did such a really, really lame thing and wing it from there.

A chemist who is working alone accidentally mixes an explosive mixture inside of his chem dispenser, instantly killing himself and destroying the machine, along with exposing Chemistry to space. Nobody else was injured aside from him as a result of his actions. What do you do?:
IC issue. His colleagues will call him an idiot and they’ll probably fix the damage shortly.

do i even need to justify this one

do i even need to justify this one

You’re not legally obligated to but it’d be appreciated.

Overall app’s good imo, maybe this clown/hos thing is meh. I’d have concern that you might burn out playing so much in a such short time. Looking at your notes… you have some, some even recent. But despite that I’ll give you +1.5, let’s see how you do

Looking at all your previous notes that are pretty recent, -2.

Looking at all your previous notes that are pretty recent, -2.

You weren’t there, man. You don’t know how it be.

When arrested recently, you offered to “lift your shirt” to be let go, as well as “massage his massive muscles”

When arrested recently, you offered to “lift your shirt” to be let go, as well as “massage his massive muscles”

Lengthy and thought out application.

Horrendous amount of recent notes.
Decimal places should be abolished. Going to even it to a round number +0.5

You started playing this month and have managed to rack up on notes.

I have two negative notes and one ban that I served time for.

2 PAGES of negative notes. I can count them when I come home if you’d like.

are they hidden from me?

They most likely are. Considering they’re recent and abundant it’s relevant to the conversation.

this is all I see 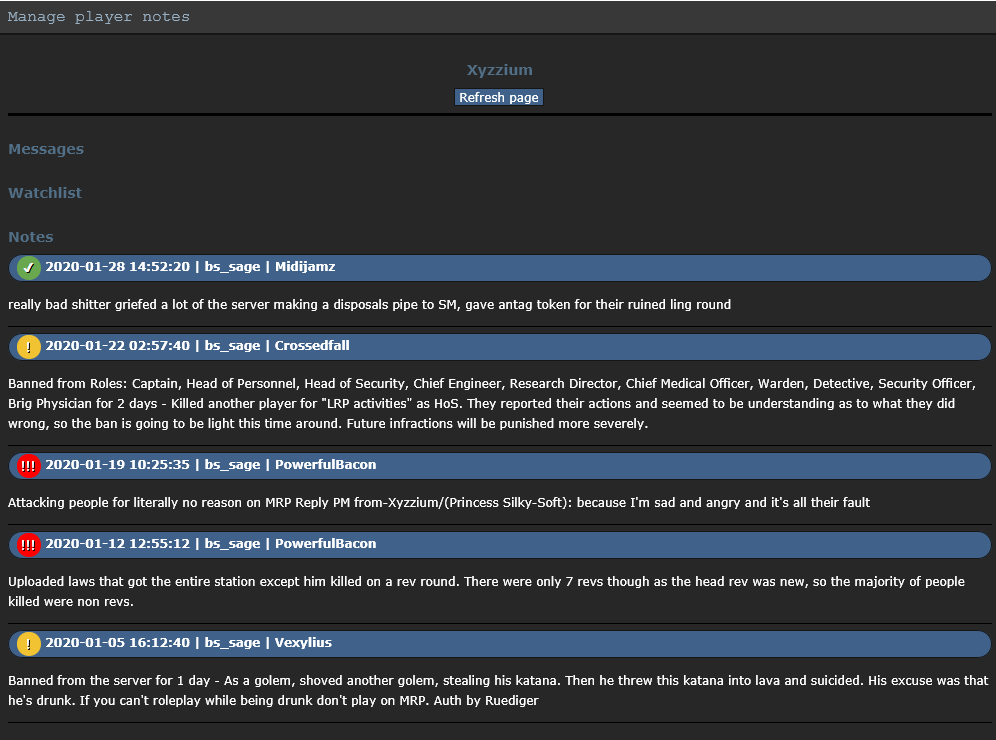 edit (please read):
I want to apologize for any shitter-esque behavior I’ve shown. I always endeavor to improve. If something I’m doing or have done warrants noting me on it, I’d appreciate knowing the how and the why of it, and I’d also appreciate being able to view it on my own time as well.

Notes shouldn’t just be reserved for admins to silently judge players, players should be able to view them as well so they can understand what they’ve done wrong and how they can improve.

Going to have to -2, you have alot of recent notes sorry man.

Denied. Report on xyzzy#2467 for sexual harassment, impersonation, and other toxic behaviors