Incident Description:A moth was named Truthbringer and the chef has an odd Name 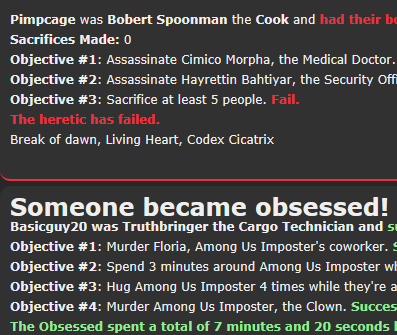 “Truthbringer” is a single-word noun and therefore complies with the naming guidelines for moths, in my opinion.

Both “Bobert” and “Spoonman” are real names, if a bit uncommon.

Normal human names, the kind that won’t raise an eyebrow if you chose to name your child.

If someone told me their name was Bobert Spoonman IRL I would have a good laugh because that is a very unusual name. Maybe on their own either would be fine but the combination of a strange first and last name is ehhh. Bobert Smith, meh. John Spoonman, sure. Bobert Spoonman? LMAO

Truth noun
bringer noun
Feels like they are separate words, but hell I used to do something else rather than my english homework so I guess that came to bite me in the ass.

I messed up my name the first time, I won’t lie. This is the first time I’ve ever played a nonhuman in SS13 so I’m not familiar with the customs and lore. But an admin talked through it with me and said it was ok. I can change it again but I would really prefer to keep my existing name if thats ok since it conforms with the naming polices.

I plugged truth bringer into google translate and got “Veritas Dator” and it’s pretty good.

There may be some other moth named Veritas on station though…

“Lie ender” came out as “Fines Mendacium” which is pretty good too.

Was kinda vague when I wrote up “single word” names. Some concepts can be mashed together into a single word (as per mine: Sunburnt = Sun Burned / Ovenmitt = Oven Mitt)

Quite alot of the examples I gave had no criticism as per:

Ill be 100% honest, we probably won’t be able to get brand names or the likes through a filter. If it were changed to chocolate or cocoa you might have a chance then. Also, I say just leave the random name generator as is and just use a wiki list or something if people want to use/make up their own simple name using examples from that (or have a link pointed to this in archive). Got a slightly longer list. Still on the idea of Light themed words and possessions a moth might hold in high rega…

Bobert Spoonman is not acceptable for a human name.
Truthbringer, while technically a single word, to me at least sounds off-kilter for a moth and more of a clown/mime name. In addition to not strictly being an object, concept, or event.