This dude was clearly looking for a reason to ban me from the very start so i just went along with it, but when he straight up lies in his bans he needs to be held accountable.

Also note he ban evaded, so do keep that in mind for the perma. 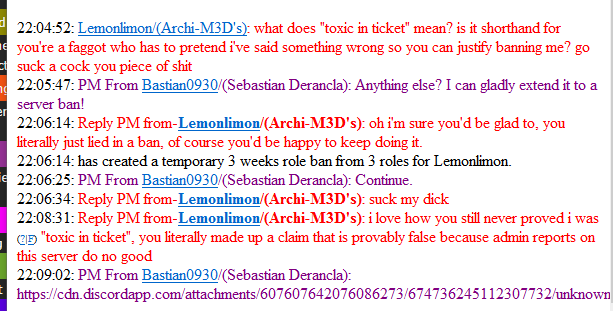 Mainly that last part where I decided “Yep, toxic in ticket.” and tacked that onto the silicon ban. Then when you reopened it, you weren’t the most friendly

I opened a ticket to ask why you lied on my ban. I was entirely friendly UNTIL you lied on the ban, you even just admitted it. The worst I said until that point was that you were going to ban me anyway and to just get it over with, since that’s what you wanted to do from the start. When you lie and say I was toxic, then yes I’m going to try to defend myself. As I plainly stated, I logged in from another computer to directly ask you why you lied on my ban.

The last part of the first ticket, I mean.

Yes, I just mentioned the part where I knew you were going to ban me and told you to get it over with so a new round could start. Literally this whole thing should have ended at a roleban for not following my laws the way you think they should be followed, but you had to lie in the ban and make it a problem.

Look man I know you’re happy to have some other reason you can stretch to try to validate another ban on me so go ahead and get it the fuck over with and don’t pretend it’s worth hoping logic is enough to change your mind.

Yeah that’s pretty rude and dismissive. I wouldn’t use the word toxic for it personally, but it’s not a far-cry from being accurate either.

Also, while it’s not 100% relevant to the thread: you definitely broke your law by killing someone in that situation (or any other) Your first law was “Do no harm.” and that takes precedence over any other law or personal feelings as a player. You are never permitted to do harm under any circumstance, even the circumstance of your subversion as an AI.

Definitely toxic behavior during the second ticket; you can handle it in a healthier manner by taking a few minutes to breathe and then making an appeal on the forum, even if it’s just appealing what will later be a fragment of a note.

Okay, and I admitted that the interpretation of the laws did not match. I was under the assumption that killing someone only to revive them later was okay if the alternative was potentially killing the entire crew. I admitted that and was fine with the roleban. My issue is his lies in the ban, and him banning me from the server when I called him out on it. Saying that I know someone who is just completely ignoring everything I say is going to ban me regardless of what I say may be dismissive but it is not without basis. It is not something that should be put into a ban as it is not something that is bannable, and when I brought it up to him he banned me from the server. It’s a clear abuse of his power.

Forgive my potentially blind face, but what exactly did Bastian lie about?

up for debate if it’s a lie, but it’s whether the line I quoted is toxic or not

Twofold, he lied saying I was “toxic” as a valid punishable act on my ban, and then saying I “reopened” the ticket when i made a new ticket to ask why he’d lied.

Saying that I know someone who is just completely ignoring everything I say is going to ban me regardless of what I say may be dismissive but it is not without basis.

He did explain it though. And you claim to have accepted it, but then contradict yourself by making it sound like he didn’t even try to explain or let you explain.

Edit: Misunderstood. Full ban was for being toxic like you were, I thought the ban evasion was done to re-open the ticket.

He said that killing one person to ensure the safety of the station is the same as plasmaflooding the station just because my intent was to have him revived after he died (which i immediately called for someone to do). That makes it clear that he wasn’t considering the logic I applied, he was literally picking up the fact that I stated I was going to have the man revived and saying that that one fact made it the same as killing the station when i was literally trying to save the station. There’s nothing “toxic” about understanding that someone who would make that comparison is not going to see reason. When I opened a ticket to point out that I’d done nothing that should be considered 'toxic" he banned me from the server. When I logged in from another computer to ask him why he was making shit up, he permabanned me.

and again my point is that he LIED in the ban. The ban had a statement that was patently false. That is something worth having him elaborate on.

By making a new ticket about the ban, you did break rule 5.

And this is something you could have stated in the ticket. Instead you just made the comparison in a way that made literally no sense.

I opened a ticket to ask why you lied. I didn’t open a ticket to question the ban, I opened it to have proof provided to back up your lie.

overall it’s pretty clear at this point that you’ve got a grudge against me for some bullshit that you can’t let go of, so you had to add falsehoods to your ban in an attempt to cause trouble. literally this whole situation would never have happened if you hadn’t made up that “toxic” claim in what otherwise would have been a legitimate roleban. you shouldn’t have the power to ban people if you can’t keep your shit honest.

There is a lot to unpack here, so I’ll do it one by one. Lets start with the actual ban.

Decided to break law one of the hypocratic oath lawset, and cause harm. Notes for being horrible with ais, toxic in ticket. Tried to argue that killing one person and reviving them does no harm. Appeal on beestation13.com

This was for your roleban as an AI. Now, even if we remove the last third of the reason so it just reads,

Decided to break law one of the hypocratic oath lawset, and cause harm.

You’d still be banned. You broke the rules and your defense for it clearly demonstrated a lack of understanding for the role. That ending bit does nothing but provide context for future admins, and if I’m honest with you; reading that ticket, the follow-up, and this appeal, does give me the impression that you are an unpleasant fellow to deal with. You were clearly in the wrong and you instead took on an insulting demeanor and made the situation worse for yourself.

Now. It is, as others have said, somewhat debatable on if that specific encounter was toxic. I would certainly call your responses unsavory. But, the fact of the matter is, by following-up in the way you did, you retroactively validated Bastian’s description of you in tickets. Whether or not it was true originally, it certainly has been proven to be the case now and I would fully defend Bastian’s use of the term here.

Moving on, we have the extended ban for re-opening a ticket. Despite your claims that you didn’t do this, you very clearly made an effort to continue the discussion after the matter was settled. Even if you didn’t like the outcome, once the matter is settled that’s it. You can come to the forums to make an appeal, but the way you handled it was incredibly childish and deserving of your extended ban as you clearly violated our rules.

Finally, we have the permaban. This one is pretty simple, you purposefully connected with a different account, from a different computer, to circumvent our checks in order to force a targeted encounter with a member of staff regarding a matter that was already settled. We have a zero tolerance policy for any form of ban evasion. So the ban is justified and will stand.

A lot of this could have been avoided if you simply took the time to read and comprehend our rules. Your lack of willingness to comply with even our most basic rules and your consistent disrespect towards staff has caused you a lot of problems. As it has been said many times, “Not knowing the rules is not an excuse for failing to follow them.” As I see it, Bastian labeling you as a toxic individual in tickets is totally validated by your behavior. Further, your impulsive handling of the situation has caused things to escalate to the point where you are entirely banned from Bee. As some friendly advice, you should take this opportunity to really reflect on your behavior.