The dumbest things you've managed to get away with

This thread is for all the times that suspicious moments went unreported or when sec has not evolved critical thinking skills. This also doubles as a “suspicious activity for a sec officer to think about”. I’ll go first:

The amount of times as a non-chemist I’ve managed to get a chem board by asking politely as a antag and then proceed to make bombs is amazing. Even if I’ve blown up multiple parts of the station, the engineer who let me into tech storage or the CMO who printed a chem board for me but don’t think: “Hmmm, I let a guy have a chem board not too long ago. Maybe I should report to sec that I think they might be making bombs”.

I had a goal to steal secret documents as my first ever anatag round. I was a robo and I walk up to the HoP and say “Can I get vault access? I need gold for robots.” He actually said yes. I just walk into vault and take the documents. By the way I missed the vault and walked into the AI upload chamber. I keep screaming at the AI “WHERE THE GOLD AT?”, until it told me the vault was east of my location. I can’t believe the string of events that allowed me to get away with that. Like I didn’t have AI upload chamber access, but the AI just let me in??? 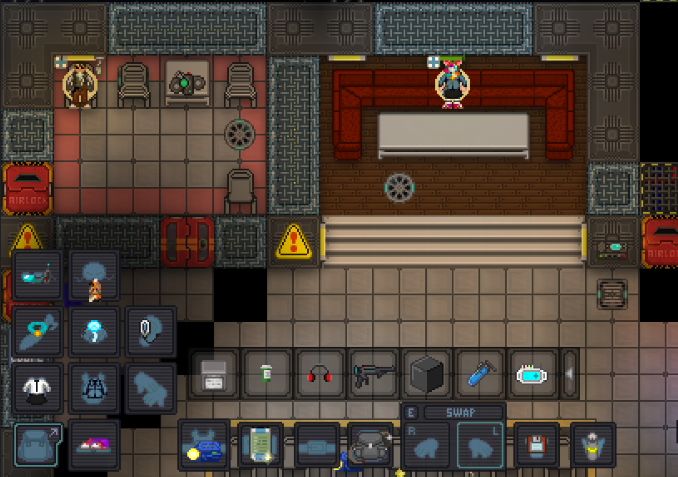 This. I literally walked into science as a Psychiatrist, took a tech disk, and left. I then walked into engineering and stole the blackbox and left.

having multiple witnesses, prints and such as evidence of my heretic activity.
onyl thing against it was my robo buddys word saying i couldnt have done it as i was always in robotics.
Security deciced to search me and didnt find anythign and let me off scot free because i didnt have anythign on me.
How did i get away with this?

Does it count coming from the victim?

Heretic got me, put me in straight jacket and muzzle. Took me to Sec, told Sec I was the heretic. Heretic gave Sec a Heart to “prove” it. Sec tried to murder me with a bottle of alcohol and a lighter, failed, Heretic took me back. Then went and sacrificed me. Not once was I or the Heretic searched or questioned.

Also, I have spawned 3-4 times with the SM objective on Arcade and offered to setup the SM as there is no Eng staff.

As Kiera, I bought a private security force ID from a custom explo vendor.

I wheeled into security and took all their donk pockets.

One sec off “caught” me, wondering why I was in the brig hallway but I made something up.

Let me go, and even took me to cargo where they were BBQing.

I stole the donkpockets because there wasnt a good chef. Turned out that cargo had been BBQing all shift and I just didnt know

acacia lowpop
first time ever playing as a heretic (except of the times when i played on random servers, rolled heretic on TG, got confused with 2 mouse button controls and got lost in space on a mech)
the only people on the station are Panicalius, Johan Archibald and me (latejoin)
there’s an event with ion cloud
they are watching it from evac window
on my way from arrivals to evac i notice an influence that was not collected yet
think that it is a sign that one of the other 2 people is also a heretic
tell them about it
hint them that something is sus in there while we are watching the ion cloud
they don’t get it, obviously
after some time of trying to convince the “other heretic” to reveal himself in this awkward talk i just give up and show my mansus grasp aura around the hand
Johan seems to notice this but doesn’t give a fuck as far as i remember
Panicalius says something like “oh shit of fuck”
we all go to that influence
turns out only i see it
Johan walks away
i collect it in front of panic and it becomes visible for the crew
Panic says something like “oh shit of fuck” again, walks through maints and avoids me for the next 3 minutes and then stops caring
both of them forget about it nearly 10 minutes later

As Seas (a blind lizard) I played a shift of Cargo Technician before I went to bed, ended up rolling Traitor and decided to go with it. I grabbed an e-mag and some black gloves (that weren’t fingerless) and asked my quartermaster to ship me to RD office as a prank.
My QM is awesome, and actually went along with it. I quickly realized the locker was in a room adjacent to the office, so I e-magged the door and locker in a panic and grabbed the reactive teleport armor, and then just waited in the box I came in to be let out.

The research director that round, CAME INTO THEIR OFFICE and saw that the door and locker was e-magged, and the worst they did to me was complain that security was incompetent enough that they let a cargo techie break into their office over command comms. Didn’t even ask to check my bag or see suspicion of me. And then I just… scrambled back to cargo in a cardboard box. Immediately went and bought a storage implant and put the emag and TP armor in it.

This shift was actually the closest I’ve been to greentexting; because my target the Mime ended up dying to xenos… but unfortunately I too died to xenos.

A very amusing shift though.

I got away with nuking the station as a assistant

What, are you blind or something?

I as a heretic once got caught standing close to a rune by a seccie, immediately cuffed, gagged, dragged off and executed.
I might just be salty but I feel like everyone else is playing on easy mode as an antag somehow

It all depends on who’s HOS and Captain of that round for antags. I’ve literally had a round where I was a pirate and almost got accepted onto the station because despite being a enemy of the station, I technically didn’t commit much crime from how badly the pirates were dealt with. I ended up being sent to the gulag to live my days on lavaland, only to then get tossed into lava because I had almost managed to kill warden from how much they talked.

I can’t comment much on the stricter captains/HOS’s, as I think I usually end up dying in a firefight and get stuck in hell while they try to revive my brain damaged IPC body

Did you have mansus? Were you wearing any heretic equipment? What was your race?

I’m pretty sure you were in the sec lobby right next to sec gear room, and I’m pretty sure I was the one who found you and I was just like “what the fuck” and then you told your story about being hungry before I dragged you to cargo (BBQ RIBS LETS GO) and the shuttle

Yeah it was you haha, I think I’d RP’d something like *Tries to hide the stolen donk pockets

Pretending to be the warden as a mime.
somehow everyone just went “seems legit”

I kept signalling with a signaler on default frequency as the RD said on radio that he’s working on his bomb.

At one point, I hear a massive explosion, followed by the following:

RD says, “SOMEONE JUST BLEW UP MY BOMB.”

I was in shock as I read it, waiting for the admin PM.

…But it never came. (thank you yoshimi for not bwoinking me <3 )

yea im pretty sure you did, you definitely used a custom emote during that confrontation

I have a new dumb thing now. So I’m made into a insane person antag, my goal is to get impregnated by a xenomorph egg on the station that’s hidden. I get dropped off by CC into the custody of the station (I’m just gonna assume I’ve been arrested and jailed for trying to help xenomorphs take over a station). I spend 50% of my time force bed buckled (sec doesn’t just put me in perma) and the other half I am free, literally during the handing over of me to sec the other officer doesn’t grab me so I just run for it.

I say that to lead up to me breaking out of a welded locker and get the cuffs off INSIDE SEC STORAGE. I pick up some new drip, only non-lethals because I’ve decided for this character that they would never hurt anyone who was able to join the great xenomorph hivemind, and then as a sec officer to let me out. They looked me up and down: literally still wearing a prison jumpsuit, sec armor and helmet, sec back pack (that turns out to be full of security gear), sec headset and glasses. After examining me, they actually then proceed to fucking let me out. I was asked once about the jumpsuit, and I just explained that it was the clown who made me wear it (ignore you can’t get a prison jumpsuit outside of sec). Cop believes me and lets me out with all the gear. I ended up surviving to the end of the round, not in police custody.