Alright fuckbois buckle up it’s meth nade making time, the lab is ready and you should be cookin’ but this is no regular meth. this is ready to boom boom the shit out of whatever the fuck you want to boom boom meth.

This guide is mostly based on acquiring the good shit for your lab fast, doing plastic fast, doing meth fast, and arming yourself with the powerful methnaades. 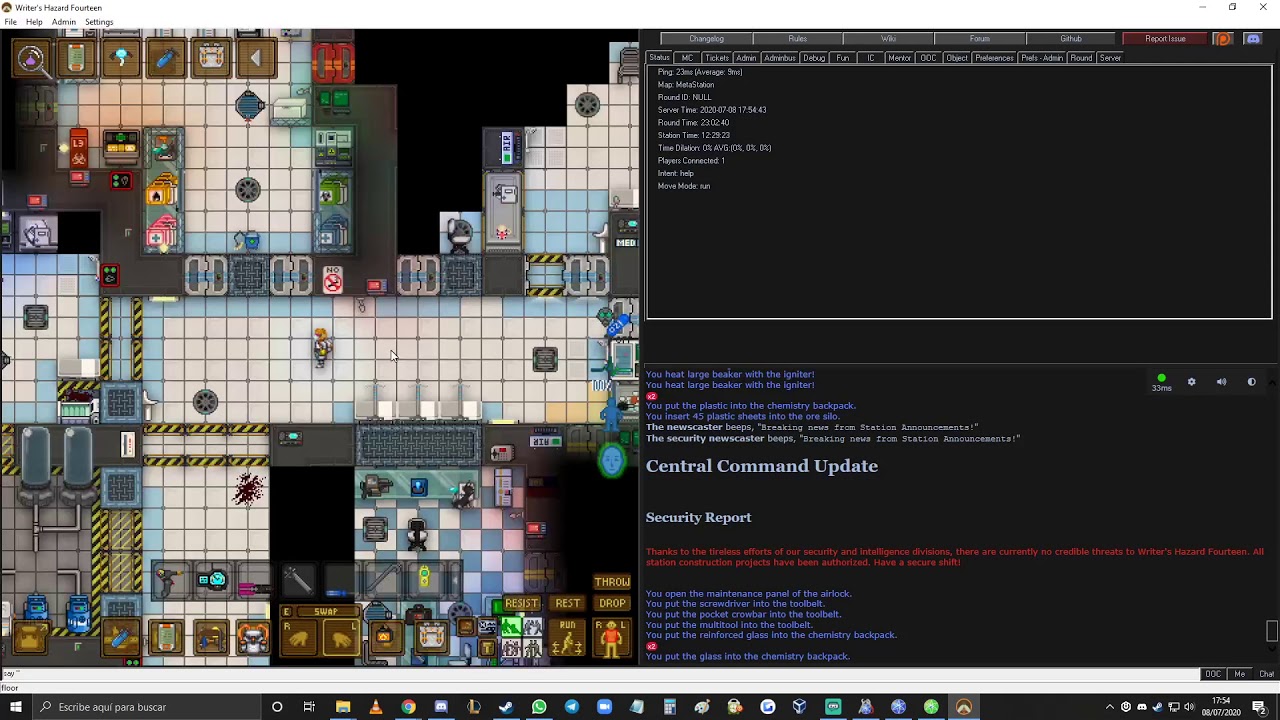 First step first you want to go to the primary tool storage and grab a mechanical toolbox (or just screwdriver, wrench and a crowbar) I prefer having all of the tools in a toolbelt (optional) 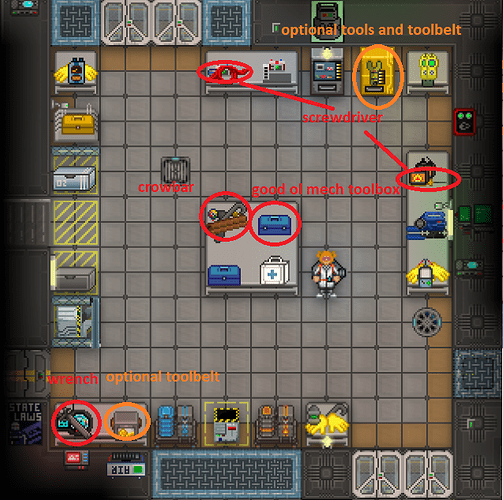 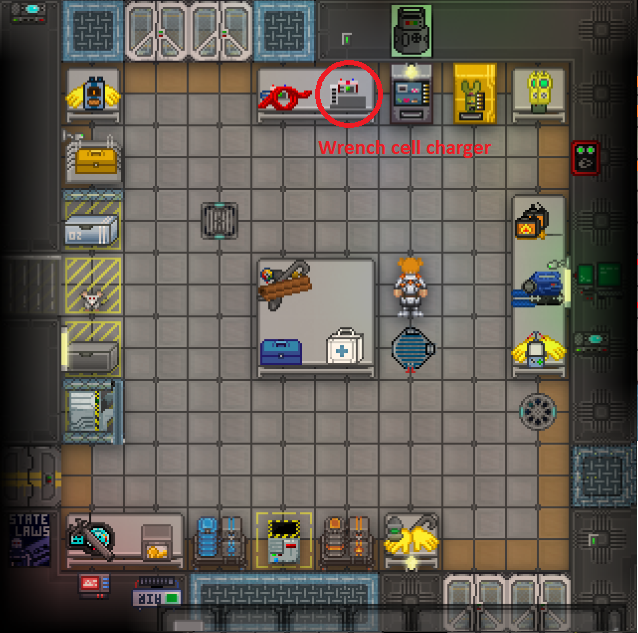 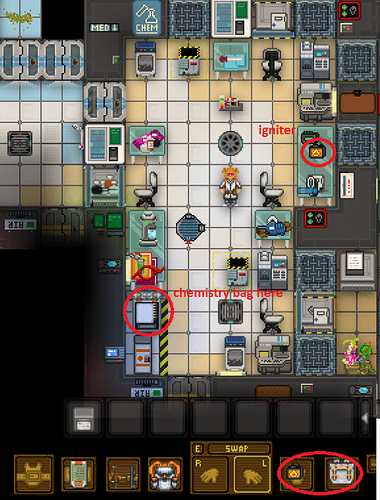 OPTIONAL STEP TO MAKE X LARGE BEAKERS
Grab yourself a couple of large beakers and start making a fuckton of plastic by mixing in one beaker 90 oil (30carbon 30 hydrogen 30 welding fuel) and heating it until it becomes ash, the other beaker 60oil(20 carbon 20 hydrogen 20 welding fuel) and 20 sulphuric acid
Pro tip just hit the beaker (90 oil) a shitton of times with the igniter then hit the 60oil 20sulphuric acid at least 7-8 times too but not until it becomes ash 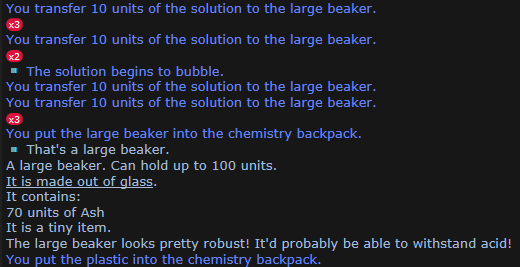 put the beaker back in the chem dispenser and add 5 carbon, 5hydrogen, 10 sulphuric acid, 5 welding fuel (do this step three times)
now keep adding more oil mixture (carbon, hydrogen and welding fuel) and acid then heat until plastic spawns and the beaker loses reagents until you run out of ash.
when you run out of ash add 30 more oil and heat it until it becomes ash and keep adding more oil and sulphuric acid until your plastic stack is 40 or more (shift click the plastic stack to know how much plastic there is) 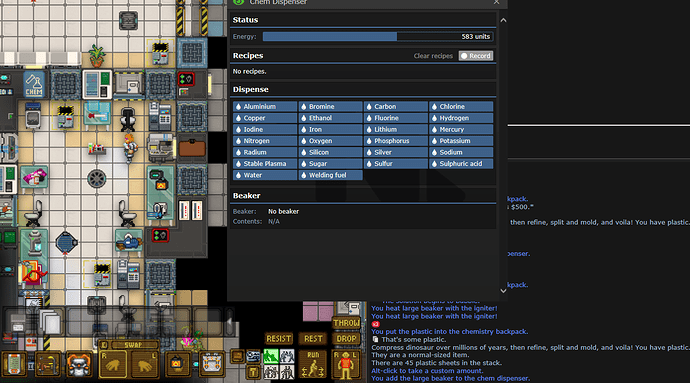 get your plastic to the protolathe to make large beakers

END OF X LARGE BEAKERS and plastic PART OF THE GUIDE

make at least 20 to 30 X large beakers or 20-30 large beakers (more beakers more grenades)
To grab all of those beakers just grab your chemistry bag so it’s in your hand and click on the beakers with it you can either bring iron from the protolathe or dissassemble the wheel office chairs (use wrench) to get 5 iron per chair.

in case you used almost all the energy in the chem dispenser just dissassemble it (screwdriver then crowbar) then you re add everything to the chem dispenser but reeplacing the used power cell for one of the cells you stole previously. should look like this now. 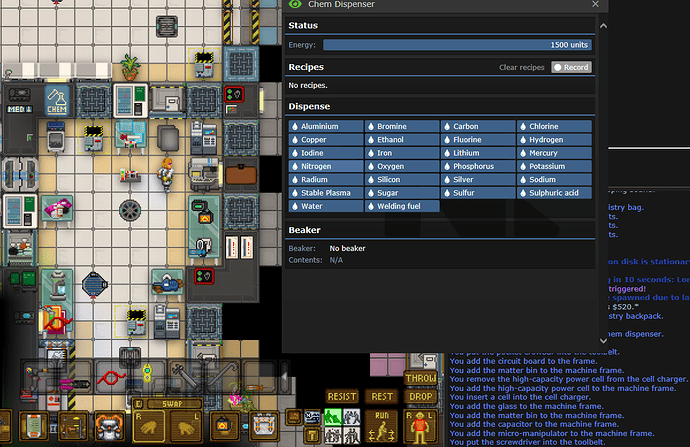 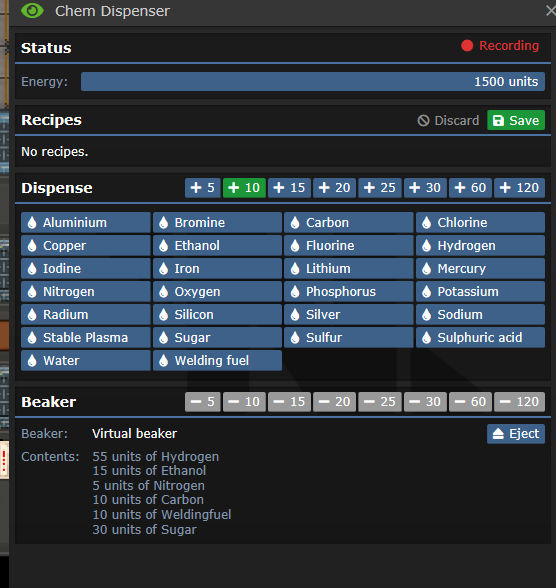 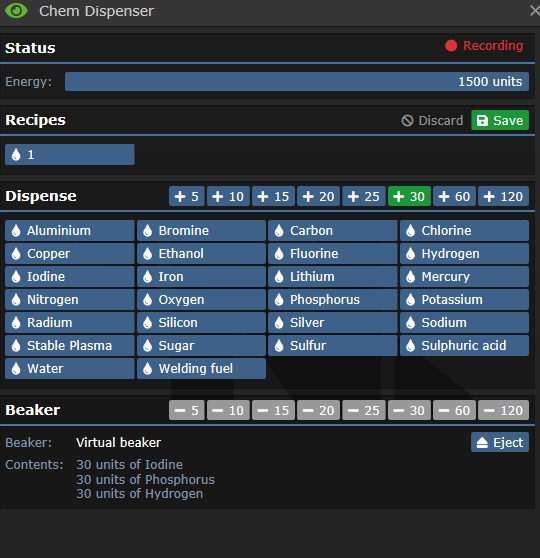 Then add on every single x large beaker the recipe 2

PAY CLOSE ATTENTION, YOU FUCK UP THIS PART WHOLE LAB EXPLODES, ADMEMES WILL POUND YOUR ASS IF YOU FUCK THIS UP REPEATEDLY EVERYONE WILL LINCH YOU IF ADMEMES DON’T POUND YOU HARD

use your IGNITER 6 TIMES on every beaker. Make sure you didn’t heat the beakers more for any goddamn reason, if they were heated up before for whatever reason, you’re dead, your coworkers are dead, everyone is dead.

you can then add those beakers to a grenade case (pick 2 iron [alt click the iron stack select 2], click on it with the same hand you hold the iron, scroll down and select grenade casing) 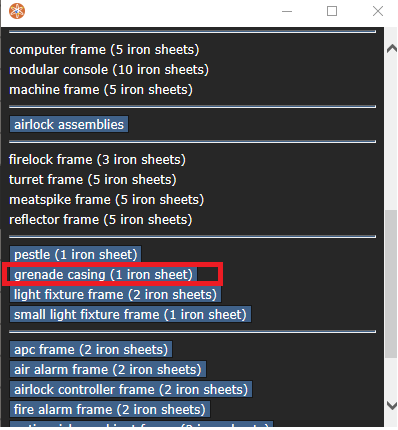 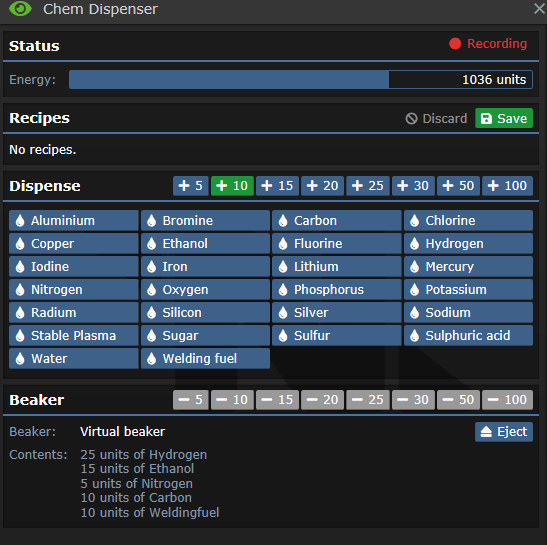 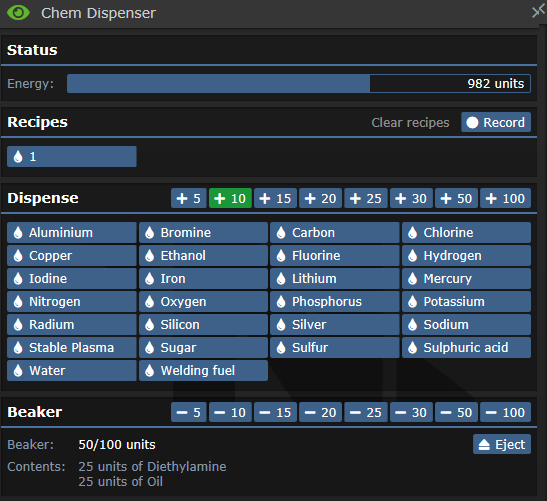 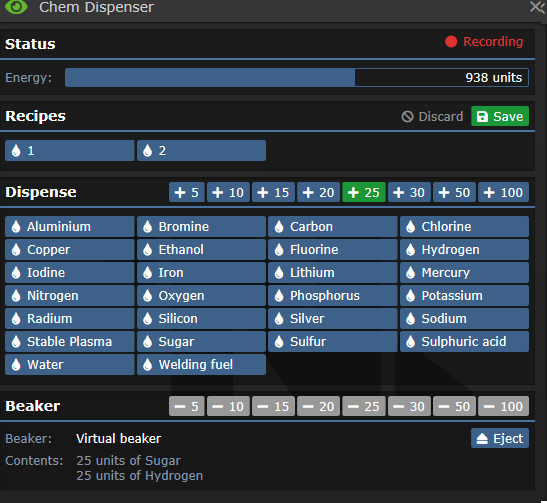 guide 16547×503 20.5 KB
Add it to your beaker
you should have now 100 ephedrine, grab the beaker and click on it with the same hand you have the beaker on until it says that the large beaker transfer is now 25 units and add 25 units to 3 other large beakers having a total of 4 beakers with 25 units of ephedrine.
Recipe 3: 25 hydrogen 25 iodine 25 phosporus 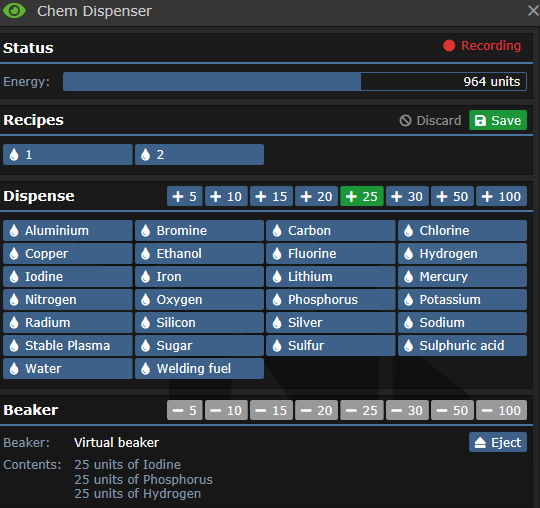 then CAREFULLY USE THE IGNITER 6 TIMES on each beaker then add to a grenade casing with wires and you have yourself some meth nades without making plastic, they have 40 less reagent so they are less powerfull but still pack a punch.

you can repeat those steps as many times as you want to make a fuckton of nades, when mastered they can be done VERY QUICKLY and amass an incredible ammount of meth nades.

Interesting topcis and facts relating to the grenade ammount and grenade trivia:

more equal grenades exploding on the same spot just make the SAME AREA deadlier but not increase the radius of the explosion.

if you put a VERY BIG AMMOUNT of grenades on the same spot (2 boxes filled with 7 grenades or 6) it will “lag” and the explosions will occur for a longer period of time rather than instantly) some explosions will go off immediately but some others will occur in the next lagged server ticks.
If the server is lagged already with just 3-6 grenades this effect will happen.

you can activate one meth grenade, put it in a box and throw the box, if the box has other grenades those will trigger too.

You can put a bunch of grenades in a backpack, one of the meth grenades having a mouse trap attached, being placed last in the backpack. (DO NOT OPEN THIS BACKPACK YOURSELF AFTER ADDING THE MOUSETRAP GRENADE) then leaving the backpack around for the casual pleb who wants gamer gear so the meth grenade will trigger and each and every single grenade that was on the backpack too when he opens it.

The rest is imagination, feel free to comment or question anything on this guide.

Okay, I will avoid commenting and wait until you finish this.
Also, you are under arrest for theft.

Proceed to watch this video then using the text above as context for what the fuck am i doing and why.

(posted video on top of the guide for better view)

Why don’t you just put half the ingredients in one beaker, and half in the other? Then you can heat it as much as you want beforehand

you can’t drink that then

That’s fair
Another tip: you can get ash from burning paper at no cost to your chem dispenser

Is there any significant difference between 200u of meth and 240u of meth in explosion size?

1 more tile range for both damage and gibbing

Pretty long guide to say: Make meth, heat to 5-9 degrees below detonation temperature (375 degrees Kelvin, or K, by the by), and stick into a basic grenade housing.
This guide doesn’t even mention that standard grenade housings, the kind you can make for one metal at round-start, raise the internal temperature of reagents contained within by 10 degrees Kelvin.
You don’t even need to bother with the “tricky” igniter heating step, since this guide assumes access to Chemistry. Just use the Chem-Heater.
This guide also doesn’t mention the principle danger in making methamphetamine - ensuring that you don’t have any Diethylamine left in the mixture when you’re adding the Iodine, Phosphorous, and Hydrogen. The mixture of Diethylamine, Iodine, Hydrogen, and Phosphorous explodes - even at room temperature.
There are some good notes regarding the particulars of explosion mechanics. It’d still be nice to include the expected damage from smaller amounts of meth used in an explosive reaction, since it’s pretty obvious that more meth will mean a bigger boom.
For reference, here are those values:
<5u: No damage, consumes all reagents in beaker upon detonation.
5u: APC/Wire damage. Will not create a hull breach without multiple detonations.
10u: As with 5u, though with more substantial damage. Small chance of a hull breach.
15u: A one-tile hull breach can be expected.

Also, regarding mouse-trap grenades. In order for them to work effectively, you need to prime the mousetrap before you stick it into the grenade.

chem heater is slow as fuck

That did occur to me, but if one needs a guide to tell them how to make meth - perhaps removing a chance of critical failure because of a single misclick is a good idea?

EDIT: Additionally, the precise number or igniter uses implies that not a single error was made in mixing the various chemicals. If it’s even a little bit off, the specific heat of the varied reagents means that it’ll either be too cold, and not trigger, or too hot - and explode in your hand.

You can’t make 2 meth nades in 4 minutes with the chem heater not upgraded it’s so much faster to click something 6 times.

Yes, I’m aware of this. Again, my primary complaint revolves around there being zero room for error, since having DIFFERENT reagents inside the beakers will effect the overall number of times an igniter needs to be used.
Oh, and I wasn’t going to say this, since it almost goes without saying, but… spell checking, and post formatting, for the sake of readability generally don’t matter - but when you’re making a guide which can result in the user literally exploding, it kinda does. It’s depressing that, while I’m very happy you decided to take the time to share some good knowledge, you didn’t take the time or care to make your guide the best it could be. Just saying, is all.
You could have also further researched the most efficient method of mixing chemicals to produce desired results, and save some space by having those recipes be modular based on reagent container sizes.
The procedure boils down to:

As i understand that some users might explode for clicking wrong it’s fast as fuck, to do, and you can drink it, this guide is for fast phased LRP bombing or self defense grenades that can’t wait, it’s quick requires no tech and fast as hell to do I like the “mistake discipline” on making you do things right or else you won’t play.

If part of the explicit goal is anything other than making methamphetamine, why bother using meth as an explosive at all? It’s much faster and more efficient to slam the desired amount of potassium and water into two separate beakers, and stick those in a grenade.
You have some great notes on grenade construction. You have some great notes on how to create large water bottles that have the same reagent containing potential as big beakers. You have a guide on how to make meth in here. However, all bundled together, it comes across as cluttered, and - due to aforementioned formatting issues - difficult to effectively read and utilize.
Two separate guides, one on grenade construction (which does indeed differ from the wiki on some points), and another relating to quickly making meth probably would’ve been more appropriate. On the latter point, as I said above, you’ve not taken the time to research the most efficient method for mass production. There are a large number of unnecessary steps. I’m not saying this stuff to dissuade you from having posted a guide - I wish more people would share what they’ve learned about the game - I’m trying to point out ways you could’ve done it better.
That’s all I have to say, really. Sorry if I’ve come across as being a pretentious, sanctimonious douche. I’m critical, because you deserve a fair evaluation of your guide - having had the drive to post it in the first place.