As far as I can tell a lot of the good symptoms have been cast into the shadow realm-IE Starlight condensation. And the radioactive resonance symptom could be really good with the new radiant cells one. Coming from a viro main the job isn’t really fun without them

-starlight condensation was replaced with the level 6 hyperperspiration, which heals toxin and purges chems, spraying them into the environment

-nocturnal regen was replaced with level 7 Pituitary Disruption, which gives you brute healing and makes you grow. It can be cranked up to heal you at an absurd rate at the cost of cell damage

-tissue hydration was replaced with level 8 thermal retrostable displacement, which teleports you to a previous location when hot or cold, and heals burn damage

-plasma fixation was retroactively replaced with beesease, which heals the main three damage types with honey

I mean those are ok and they can work, problem is that they have some bad drawbacks that would make a person not want to use them. A lot of said drawbacks are absolutely awful. Which means If I want to make a non intrusive healing virus I am forced to go Regen coma and sensory restoration every single time, which is boring. At the very least give me starlight condensation back. Or any of them. No reason why some of the better ones like starlight and nocturnal can’t coexist with the new ones.

If you wouldn’t want them back as they were you could alternatively add them back in the highly unstable pool, nerfing them. In their absence I haven’t had any fun with my favorite job

To put it bluntly, the conditional heals kind of sucked. They were replaced with “passive healing, but you have to be decent at viro and deal with a few downsides”

This means releasing a contagious beneficial disease is no longer the best option, instead favoring a more tailored approach to what you want.

Also, what are you talking about regen coma having no downsides? It can actually be quite debilitating

I understand that regen coma can be debilitating but it considerably less so than being teleported whenever I’m hot or cold. If I’m being blunt here I really just want starlight condensation back. I would consider myself a pretty decent viro, however I really can’t function without it. It was always my “Baseline” symptom I would even give up my one level nine symptom in heartbeat for it. Or even create a rare level 10 just for legacy symptoms, so those who want to try to get one of the older ones can, but it isn’t simple of guaranteed. (The Symptom that destroyed nanties would also be great so I can flex on the scientists lol)

I agree. Some of the new “good” symptoms are basically bad. organic flux induction is a lot better than getting radiated and beesease seems good but if it needs honey from outside source(which I doubt) it is a huge downside as botanists normally don’t make honey. Pituitary Disruption while is not as good as nocturnal regen is somewhat Ok(free flashlight). thermal retrostable displacement is the worst of these IMO and really should be replaced, hyperperspiration heals the person but will probably hurt the others (does it purges all kind of chem?)

I mean nobody had problem with healing under certain conditions and the removed symptoms were really popular, and i don’t think it was really needed to make virology harder as good viruses were already rare

starlight condensation was never a really good healing symptom though. It primarily heals toxin. Looks like your hangup is the fact you can’t make a contagious beneficial as easily anymore

What’s so bad about thermal retrostable displacement? I was under the impression it has the least downsides of them all, actually, unless wearing a bag of holding.

Hyperpersp purges all chems, but mostly just extinguishes fires with the sweat, and spreads healing chems around too- should be fine unless the host drinks lube or plasma.

The thermal one feels… weird, I mean getting teleported while going into cold or heat is not what people are looking for (like when you have no choice but to pass a cold/hot area and it keeps teleporting you, unless it has a cooldown, in that case it is ok) , but that cab be a really big downside while escaping from someone and you suddenly run into a hot area

Now that i think Hyperpersp is not that bad, and maybe can be used to trick the others (inject yourself with chloral hydrat, jump to enemy and while he is killing you he goes asleep and others jump on him)
It still might cause some trouble like poisoning your fellow crew or losing the healing chemicals while you need it

But, if this update was intended to make a person who uses viruses to only rely on them, it did a goood job

it has a 30 or so second cooldown actually, so you wont get stuck in one place if it’s set on fire or you can run through a hot area. the only removed symptoms were conditional heals

viro started as passive heals, then it was nerfed to conditional heals. beeviro restores passive heals but gives them downsides and stat requisites

well yes but actually no, As I already said I can still make a contagious virus quite easily (Side note, even though you say making a one person virus is almost always better than a less beneficial contagious one I have found that the case is the exact opposite. A competent virologist’s job is to not only make beneficial viruses but to also protect the crew from bad ones. Making a virus that can out spread a harmful one while providing minor benefits is great) Anyway to get back on track, my main gripe is that, I the virologist don’t even want to touch those symptoms from a ten foot pole because of how annoying they can be. If your average Joe does not want your virus because it’s downsides are more noticeable in the moment Then it’s a bad virus… Turns out people like a symptom that can save you from a traitor by faking your own death than one that makes you sweat puddles. Eh, go figure? People are usually way less suspicious of nanites already, which is strange considering they are more risky than viruses. With the new symptoms people will be even more suspicious of them than they already were. The effects of the new symptoms for antags have their ups and their downs. For those who want to use their viruses to buff themselves rather than create a murder virus have some things to consider, The big sweaty guy is far more noticeable and suspicious than he would be with the old symptoms, with the tradeoff being that it is easier to heal. The more fun alternative was with the old system, where you had to keep track of your conditions to reap the benefits,Not to mention it made going in quite way easier (Side note 2: Unless this has already been thought of, hyperperspiration and alkali perspiration could make it hilariously easy to kill someone) Any easy solution would just to to bring back at least some of the old symptoms and possibly nerf them while keeping the new ones for those who want it. OR add a brand new symptom under the highly unstable pool that just heals you *No strings attached.*However the former would be more desirable.

I understand your issue, and I was aware of this when the viro changes were made: a spreading heal disease is now far less viable. The reason people trust nanites more than viruses is the fact that nanites are usually voluntary, instead of being forced upon you like beneficial viruses. However, viruses are far easier to produce and to maintain. I plan to fix the issue stacking diseases have sometime soon as well, so a protective resistance 14 or whatever virus will no longer be sufficient.
Yes, some symptoms make it harder to be stealthy. I am aware of this. This is especially intentional with Pituitary Disruption, which heals you incredibly fast at the healing threshold. Virology has a lot of other stuff useful for antags, not just on the self-buffing side.

Like i said, your issue is with the fact you can’t make a force-spreading beneficial virus that won’t be quiet enough not to get you lynched. Personally, I think force-spreading your beneficials is a good way to get lynched in the first place and something you shouldnt do

the hyperperspiration combo with alk persp is intentional as well.

eh that’s not really my problem. I just actually want to have a good and noticeable impact on the round, as so my time isn’t being wasted, I also want symptoms that are just good for general use, like I said before just adding a symptom that just heals would keep me contempt, even if I really do prefer the older ones. Ive played with the new symptoms and don’t like any of. Take this as feedback. It also feels alot like cobbychems, fixing something that didn’t need it and instead fucking it all up. The nanite symptoms caught the axe for no reason, and you ruined Self respiration

the nanite symptoms weren’t removed at all. why would i remove those?,

and I’ve lowered the fart shit substantially in a recent pr. 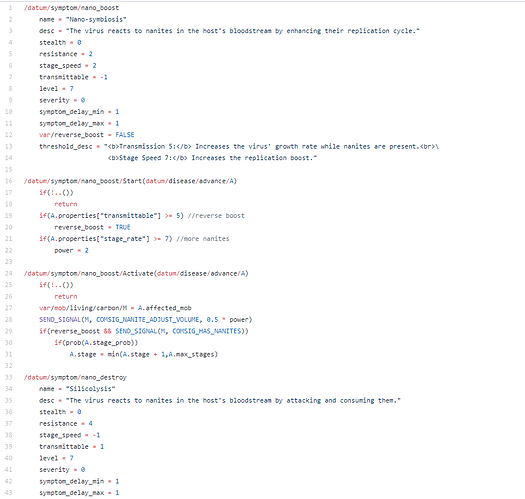 Also what I think you aren’t getting is that, the new symptoms just aren’t that fun to use Some people might like them and I can see their worth, however in my experience I wouldn’t want to use them because they are way too extreme and really aren’t fun outside fucking around. The reason I want the older ones back is because the effects were tame and made it fun to actually use and make viruses. as a traitor I would personally never use them because of how risk reward they are, and as crew they just make everyday life monotonous and irritating. I think they can stay, but with the old symptoms back with more drastic stat changes to balance it out, or some more generic and tame healing Symptoms