Ban Reason:
Terrible RP, already warned once to improve. Appeal on the forums if you would like to rejoin the RP server when you are ready to follow “Your character is a grown adult working on a research station for a major company. You are a professional. Act like it.”

Appeal Reason:
I’ve had a long time to think about the ban and not being able to play on Beestation. I miss playing there and I’m willing to follow the rules and change my behavior accordingly. I’ve been playing a bit on Yog and I think my behavior has changed because I haven’t gotten into trouble there. I’d like to be unbanned and play in beestation again please. (After my ban from sage I used to play in Golden, but it got deleted.)

I’ve been playing a bit on Yog and I think my behavior has changed because I haven’t gotten into trouble there.

Probably best to give a name of an admin to vouch for you.

Just to make the process cleaner.

I haven’t got any admins to vouch for me, I havent played that much to have an admin do so or know em well enough.

I’ve just been playing normally, without getting admins attention, so I don’t think they’d recognize me.

@lalaria
If you are interested in rejoining bee. I recommend following this guide:

This ban was regarding poor roleplay. I think it would greatly help your case if you discuss with us what kind of character you wish to make.

Its an appeal on forums ban, timbo

I thought that only applied to DC before bwoink, which wasn’t mentioned in the reason.

Its an appeal on forums ban,

An attempt was already made to appeal it as well.

Title: [CKEY] banned by [Admin’s CKEY] CKEY: Miriah Admin’s CKEY: RukoFamicom Is this for both servers or just one? If so, which one: Sage Which server did the ban happen on? Sage Ban Type: Permanent Ban Length: Permanent Ban Date (MM/DD/YYYY): 01/18/2021 Round ID: 26192 Ban Reason: "Terrible RP, already warned once to improve. Appeal on the forums if you would like to rejoin the RP server when you are ready to follow “Your character is a grown adult working on a research station for a …

For what my two cents is worth:

I know from several people I trust trying to tell me to give them another chance that they are capable of decent RP and just wanted to be a walking shitpost at the time.

I also know they spent their time on Golden continuing to be as intentionally annoying as possible (and getting two filter bypass bans) before it shut down. This was also most of a year ago at this point though.

only applied to DC before bwoink

Alrighty, I have a way to solve this.

@Ruko
Was your original ban towards OP meant to force them to begin to apply roleplay to their gameplay through forums discussion, or was it meant to be a full permaban? (vouch and all, though JAN 2021 might’ve been before that ruling)

Im fairly sure it was the former, but clarification would help.

Im fairly sure it was the former,

You are correct, it was intended as the former as it was an immediate escalation to perma because of egregiously poor RP.

Then they appealed, essentially saying they flat out disagree with the rules, where multiple admins agreed to sustain it as a permanent ban since there was not even an intention of adhering to them.

Regardless of what happened then it isn’t my call to make now and a lot of time has passed. Just clarifying my stances from the time it happened.

Personally, moving forward I would like to see it progress as:

(I have no position on the staff team, this is just the best way I see this resolved)

Please give me another chance, I just want to play. I’ll be more serious and my characters won’t be so whimsy.

I’ll be more serious and my characters won’t be so whimsy.

This ban was regarding poor roleplay. I think it would greatly help your case if you discuss with us what kind of character you wish to make.

Give us a good example. This ‘long time to think’ as you said must’ve given you a few ideas to improve your roleplay, yes?

Well in Yog I play a sec officer thats pretty relaxed, lenient, lets people go with warnings or reduces their prison time for good conduct, brings em snacks. They’re low on conscientiousness, high on openess, low on neuroticism and high on extraversion and agreeableness. Some of their flaws is that they’re fine taking bribes to some extent, but also willing to go to great lengths and put themselves at great risk to help others. They’re arbitrary, brave and gregarious.

So I’m not really saying anything one way or the other but here’s the bans for Miriah according to ?centcom since their last ban from here: 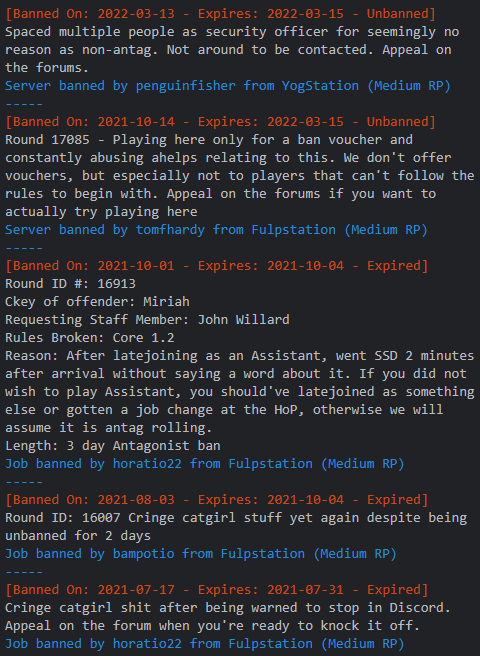 EDIT:
On looking into the most recent ban on YogStation, it was a ban that was applied in error. It was a case of mistaken identity.

That is good information to have, thank you for adding to the context of the bans

It probably won’t make up for no vouch, but I have a pretty good litmus test for you @lalaria.

Are you willing to change your character’s last name away from being a silly felinid pun, Lasagnya, in order to follow the server naming guidelines?

Use a lore-friendly name, and follow Naming Guidelines for your species.

Human: Normal human names, the kind that won’t raise an eyebrow if you chose to name your child. This applies to all other races that reference human names.

It may not actually be necessary to do so depending on current staff stances, I simply ask if it is something you would be willing to do as a sign of good faith.

If the admins told me that in order to get unbanned my character can’t have a silly felinid pun as their last name then I’d change my last name to something else.

Please do try to get a vouch if at all possible. It would make give allot more credence to your case