Alright, here’s my guide for making CO2 SM setups at roundstart without needing Science to research anything or Miners to mine anything for upgraded Thermomachines. I’m gonna show my setups for the maps that have a normal SM (so not Pubby). The main goal is getting the EER as high as possible without hitting 5000+ and potentially getting anomalies to ruin your day.

First things first, boot up your tablet and download the Smmonitor and Alarm Monitor apps. Then you can leave your tablet in your pocket to be able to see it and interact with it as needed. Then you’ll need to do a little bit in Atmos. (If you don’t have access, either get access or have your Atmos tech do it for you.)
You’ll need to send CO2 from the output to the SM engine. In the end, you’ll need 250 kPa, but I like to send a bit extra to make sure that you always have enough. Then you’ll need to get a portable pump and fill it with Plasma. Use Volume Pumps to make sure that it has at least 9000 kPa in it.
Use the pump to completely fill 6 Plasma tanks for the Radiation Collectors. This way they’ll last for about 4 hours instead of only about half an hour. Then set the pump aside for filling up the cooling loop.

Next it’s time to set up the SM itself. This is more easily shown. 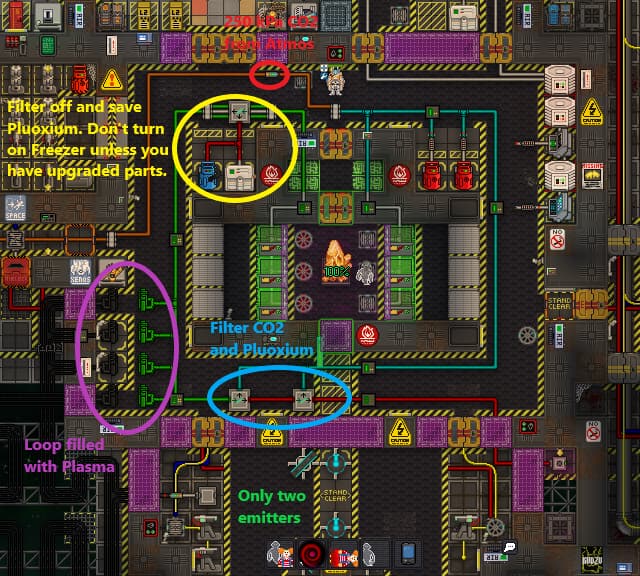 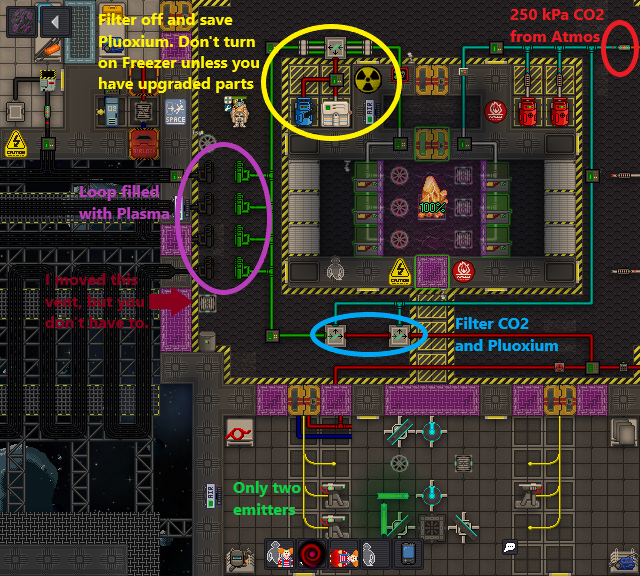 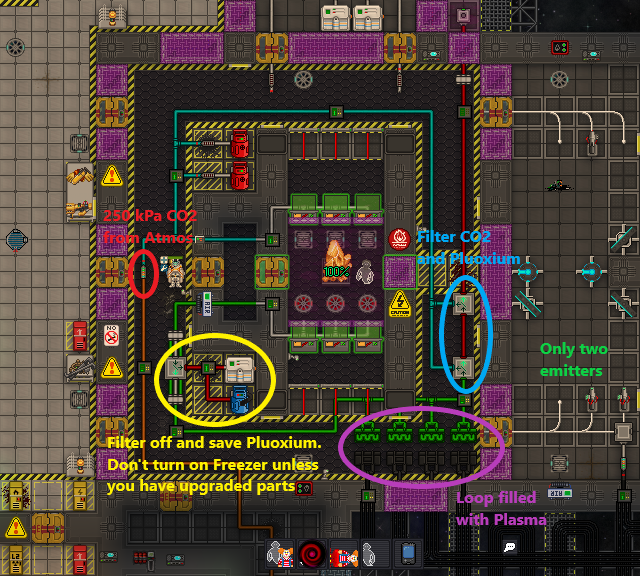 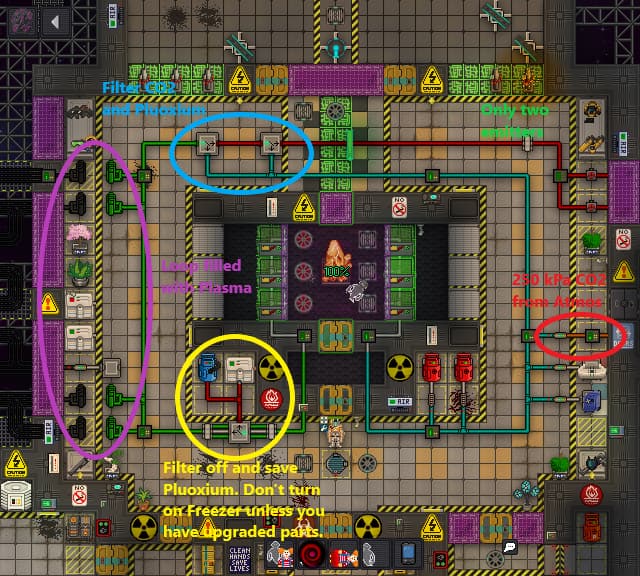 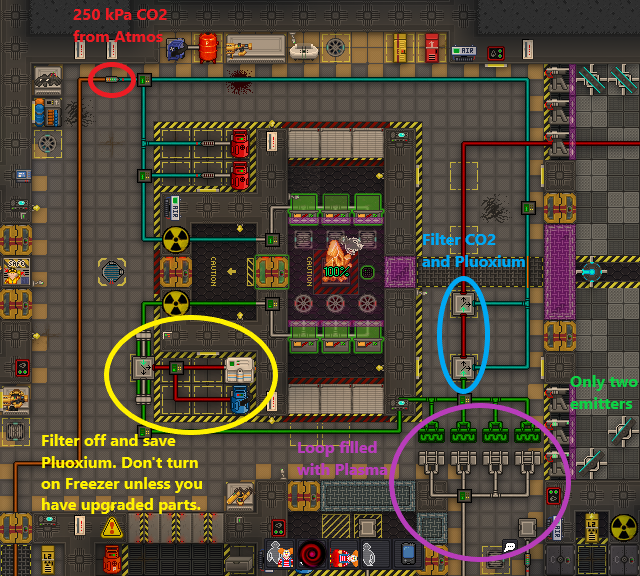 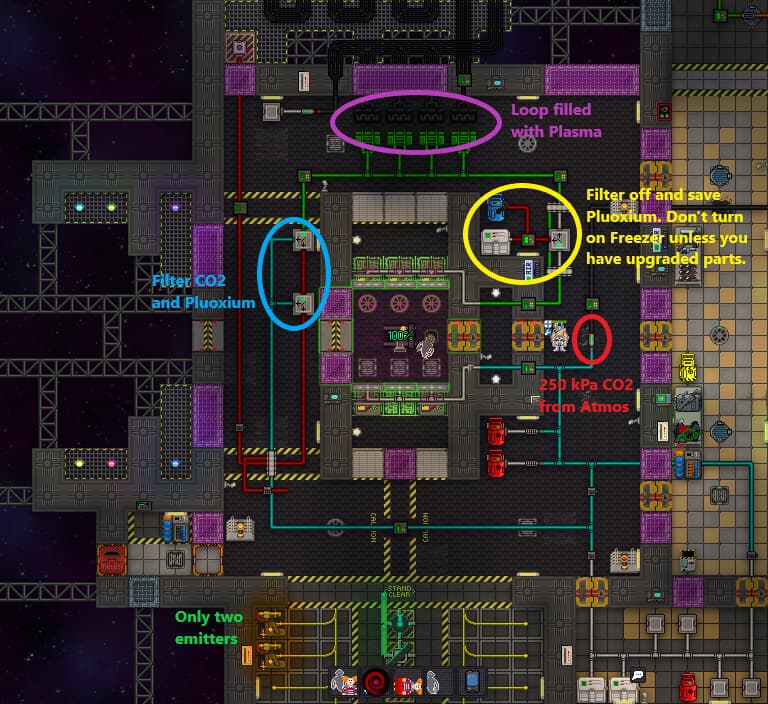 A couple things of note:

After all that, your Smmonitor should look something like this: 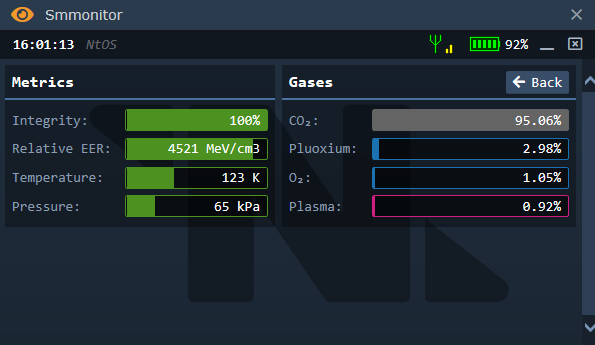 You’ll probably have to let it run for a couple minutes before it builds up to this.

Now just remember to set up the SMESs!

In my design you just start it on CO2 right away.
No fuss.

You also have to do very little out in space (and zero on Fland) so it’s a bit faster to set it up.

I’ve seen this ghetto setup a lot recently and it’s just asking to be delammed. The cooling is especially atrocious given people only seem to dump the starter tank of plasma (each exchanger holding roughly 50mols) into the space loop. Have you ever had this monstrosity catch on fire?

This is just my tutorial but with extra steps

Nope.
I’ve never had any issues with this. Also, because you’re saving a bunch of cold Pluoxium it’s actually pretty easy to turn off the CO2 and dump it in an emergency.
To make sure I’ve even spawned a Pyroclastic Anomaly in the SM chamber itself in a private server to simulate the worse possible scenario from a Supermatter Surge.
It stabilized itself with no input from me and lost maybe 5% of its integrity before completely fixing itself.

I really like your tutorial but I was trying to make sure that I got the EER to the highest, safe level that I could.
I also wanted to make sure that setting it up was as safe as possible. Once you make my setup, you just turn everything on and it never catches fire or needs any more input until the Pluoxium canister gets filled up. And that can easily be handled by just upgrading the Thermomachine’s parts or swapping in an empty canister. That won’t happen until about two hours after startup.

I made a guide a while ago too, though it was with the older atmos. You’re free to edit it how you want if anything is wrong and add what you want.
https://wiki.beestation13.com/view/Guide_to_the_Supermatter#How_to_cool_your_Supermatter_to_where_it_may_become_a_problem

You made the whole guide or just that section you linked?

The “How to cool your Supermatter to where it may become a problem” section, though I noticed someone added some grammatical fixes which was nice.

Just bumping this for anyone following it:
I added a setup for KiloStation.

I haven’t been playing much for the last couple weeks so I haven’t gotten around to this for a bit.
I don’t think anything much has changed for the other stations, but I’ll check them out and update if needed.

Will you add the even how CO2 pressure setup for anomaly core farming?

I wasn’t really planning to but all you have to do is add an extra emitter and the EER will go over 5000 and will start causing anomalies to spawn.
Then just turn it back off when you’re done getting a few cores.

you forget one important thing, you should remove all the floors around the SM, or at least weld all the vents due to pyro anomaly risk

So I’'ve played with the new pipe options and have found a rather overly engineered way to increase space cooling.

Basically, make the area of pipes running alongside the space cooler triple layered. Set plasma filters on each layer and all extra pipes change to the temp transfer pump. Set to 100%. Bonus points for taking one of the spare pipes and extending it to supply SM chamber cooling loops.

This takes much longer to setup though and station can run out of power before you finish. Also, because the cooling is so efficient, you can’t “kick start” the SM by throwing a pen at it. It stabilises too quickly to produce enough power to get the emitters going.

Once adding co2 I have gotten the SM producing over 1mw while staying under 50 kelvin. At that point, if you stop the scrubbers the SM will delam in a minute and produce a Singlo.

That’s true, but I’d only do that if you’re planning on keeping it above 5000 for a while.
I usually just turn it on until I get one or two anomaly to spawn and then I turn it off. I also will carry an Atmos water backpack to seal a Pyro anomaly in resin if it spawns.
It’s a little risky, but is fine if you only run it for one or two anomalies.

Bump because I added an image of CorgStation.

I completely removed the TEG from the CorgStation setup, but you don’t have to. Just don’t send gases to it.
This guide assumes that you only care about a CO2 SM setup.
Make a burn chamber if you want to run the TEG anyway.