How to handle wires on Box Station

This guide may be silly for many but it’s a real issue, I can’t even count how many times I did join midround or simply went for other role than engi and half if not all station was out of power. We have a lot of inexperienced engineers and even for experienced ones its often hard to keep up with constantly cut wires.

Issue here lies in philosophy of wiring that was followed during creation of this map, all APCs are in maints, outside of the rooms they control, same goes for the wiring, unlike many other stations that have APCs inside rooms and wiring is laid in more robust way-both in maints and in hallways. I fully understand it from gameplay perspective but I wouldn’t say its a good solution for a low pop map, if anything that’s how Delta should be wired since you would expect to have a full engineering staff each shift, unlike Box when there’s often one or two engis.

1. Make sure you’re producing power
As with every guide it had to be said, check the power source first. This is the only station that I would recommend not only going with SM but also with solars. Why? If wire is cut somewhere there’s quite a big chance separated sector will be still connected to at least one solar array.
Feel free to ignore Port Quarter Solars (South-West), the one that is next to Engineering since it connects to the grid just outside engineering, so if power is not getting from SM to the grid, chances are that array will be cut as well.

Rodents are the biggest enemy of the station if you’re on Box. You HAVE TO scout maints at least at roundstart and I would recommend doing it few times during the shift.

One of the ways that may help you deal with mice situation may be laying floor tiles or getting roboticists to make a bot that will do it for you. I’m not recommending this thought, while mouse won’t be able to eat covered wire the human will and tiles may make it actually harder to spot removed wire section. Remember, we’re dealing not only with mice but also with all sort of traitors and griefers that are trying to disorganize the station and while its hard for them to cut wires in crowded hallways on other stations, they can pretty much do anything in dark and less populated maintenance tunnels.

I have located few points where you can add wiring which will make grid significantly more robust.
YELLOW lines on the screen represent existing wires, while RED

are the ones I suggest you should add.

A) Engineering Foyer-Atmos
Even if you are not interested in adding wires please do at least one, it doesn’t take long and it helps a lot, adding this wire will ensure that power is leaving engineering department in 2 places, which is given on all other stations. Its very simple, you just have to connect wire from Foyer to the one in Atmos, because of pipes wires are not visible so make sure to check the with multimeter (once you got them almost done don’t connect one segment so wire is connected to grid from only one side, if there is no power you missed a spot) 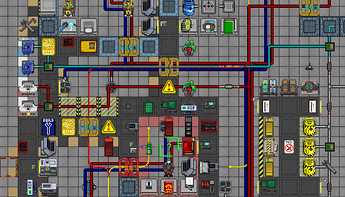 That’s the second most important I like to do. We’re connecting wires from underneath Teleporter Room airlock to Central Hallway APC and we also split another line, go underneath the window and connect to Medbay grid in front of Chemlab Airlock. You may not believe me how often mouse eats wire inside this small 3 tile long maint between Teleporter Room and Captain Quarters, its better to lay wire just in case instead of later breaking in or asking AI or heads to let you in-trust me in most cases they won’t. 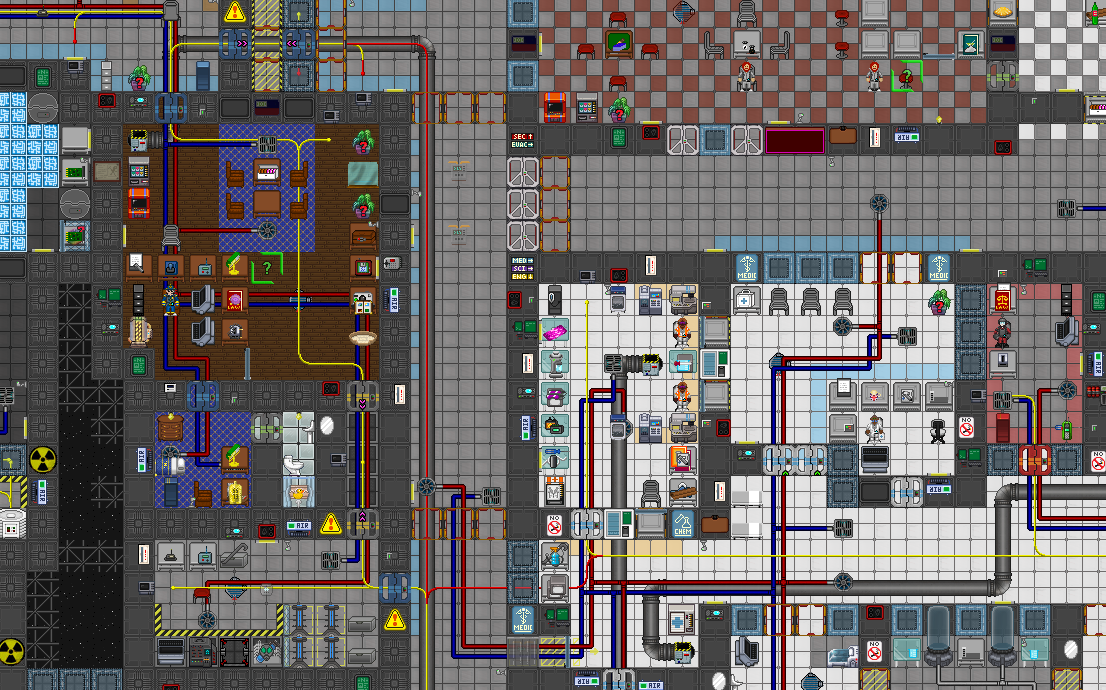 That’s another good location, its more of a bypass in case wire in either maints-west or east outside engineering, is cut, because of it station should still be getting power. You connect wire leading to HoP office with wire that we were connecting to in previous point as well to the wire in Aft Primary Hallway 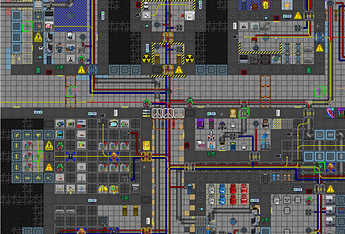 D) Bridge
If you’ll ever make it to bridge don’t forget to connect wires there. It happens quite often that one side of the bridge goes dark, it works well with wiring we added in point B (although its not as important if you have covered both points B and C) 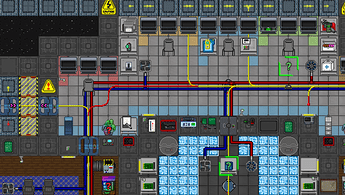 Simple addition, wires near evac take a long rout through maints you can ensure departures and part of science will get power even if original wires are eaten 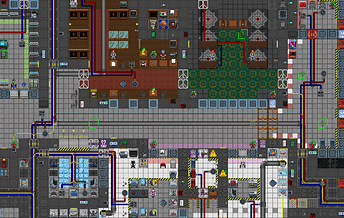 Another simple bypass, straight line connecting wires going in front of Vault and Tool Storage. Arrival section of station is the one that goes out of power most often, this addition bypasses a lot of these weak spots 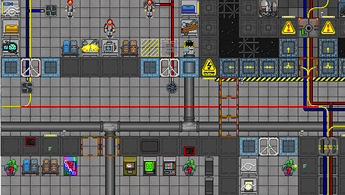 Last on our list, this addition connects section of grid powering Security and Courtroom with the one powering Detective office, Lawyer Office and even Gateway, it makes them get power from 2 different sides of station which makes it less probably for them to go out at any given time 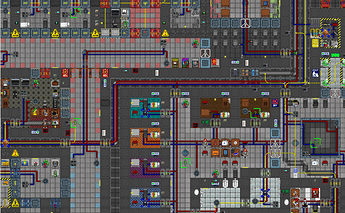 You can also use the T-ray mode on Engineering Goggles or a pocket T-ray scanner to see where the wires are underneath floor tiles. I usually just follow the wires from the SM SMES to various APCs to discover where the missing links are.

Also bear in mind that it takes a few seconds after placing the wire for the APC to start properly charging.

T-ray is kinda pain in the butt because of how it works in this ‘pulsing’ manner, also it has small range, the one on engineering goggles scans just small square around you, handheld scanner is better in that regard but still very limited. Trust me, was looking for cut and hidden wires on Delta and it was no fun.
That’s why I’m not recommending covering maints with tiles, its the same philosophy as the one applied to distro room at atmos. Yes, you could build walls or even rwalls around it but its actually better to have windows and be able to visually inspect it at any time. If anything catwalks seems to be a good solution since they protect wires from mice and you can still see the laid wire. Only issue is that you shouldn’t put it on APC terminals. I’m not sure what’s happening there but APC stops detecting external power once you put catwalk on terminal and wire node, even if they worked before

Issue here lies in philosophy of wiring that was followed during creation of this map, all APCs are in maints, outside of the rooms they control, same goes for the wiring, unlike many other stations that have APCs inside rooms and wiring is laid in more robust way-both in maints and in hallways. I fully understand it from gameplay perspective but I wouldn’t say its a good solution for a low pop map, if anything that’s how Delta should be wired since you would expect to have a full engineering staff each shift, unlike Box when there’s often one or two engis.

Pop a floor tile, check wire for power with multitool, continue down the chain until you find the cut.

Or just use the T scanner thing
On box or meta I forget it’s easy as it’s all one loop so you just start at engie apc go to medical if meds’ hasn’t got power you know it’s between those 2 apcs, t scanner pulse works fine for that