How important should naming conventions be on Bee?

They, like moths, were going to get an expanded naming scheme, albeit only slightly. I’m not sure whatever happened to it, but they were supposed to be enabled to have last names ending in -dottir too at some point.

That it does. The -dottir would be a nice addition.

Generally I’m not a fan of the enforced naming policy. Though names should still be serious, players should be granted more freedom with their name than having to follow scheme XYZ or be yote for it.

I’d be completely fine with first names being things relating to colors in general.
But as most things policy-wise go, this would take a very, very long time to get in motion.
We don’t mention Laser-Lemon though.

This is so ridiculous. How could I be so blind? How is he not a moth? HIS NAME IS ATLAS!

We don’t mention Laser-Lemon though.

Unless that’s literally a crayola crayon name I have no idea why whoever came up with this thought it was passable.

edit: oh my god it is
INCREDIBLE 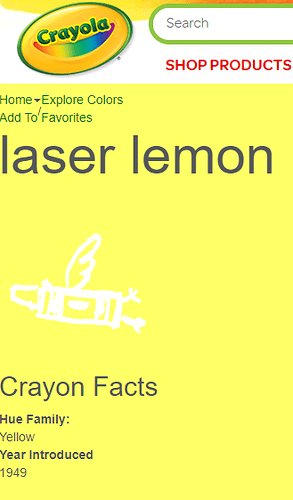 Now we must ask admemes if “Macaroni and Cheese Jefferson” is a legitimate oozeling name.

Slight more seriously, punishment for slight deviation has to go in general…

There will always be a line of what’s acceptable… but stifling creativity while arguing for people to be more creative is just not going to work.

if naming convention doesn’t go I would recommend adding more allowed names, just like we did for moths

There has to be SOME kind of regulation or this is going to happen every round:

Stupid argument. Those would obviously fall under LRP policy and be regulated as expected. No one’s saying literally every name should be accepted. Restrictions can lead to creativity but the current system allows for NO leeway and makes no sense anyway.

Frankly all the arguments in favour of restricting names just feel weak. It’s fine to have naming suggestions or a lore-friendly push in that regard, but Bee lore in general is basically non-existent and making such a big push for names as a lore-friendly dealbreaker of all things feels like a total joke when the server is barely above LRP as it is.

If you want my suggestion - allow a bit more freedom when it comes to SUGGESTIONS in the first place, maybe even include some link or info about it ingame on the character screen to encourage people to take the lore as a starting point for what they want their character to be, but don’t outright restrict any names unless they’re obviously jokes or references.

This is so ridiculous. How could I be so blind? How is he not a moth? HIS NAME IS ATLAS!

yes it is ethereal

Those would obviously fall under LRP policy and be regulated as expected.

The LRP bit was in response to some earlier posts that seemed to think they’d be fine. There does need to be more leeway, yeah.

I suggest making a separate ban appeal topic and linking it back to this (in a calm manner. Don’t throw away your chance by being aggressive.)

I got it appealed the next day after but thanks lol

It… happens very regularly. Some do it alot

I got a note because I named myself “Jack Hayden”.

I didn’t make any IC references (except having grey hair) or memes, I just played regularly, but the name was enough.

If you ever think a name might break any rules, adminhelp before you use it. That’s how I was allowed to use Beats-The-Monkey.

I mean… sure… All that will clear you for is the CURRENT policy, which is where most of the complaints are coming from. If rulings are subjective and given on the spot, it could be likely that rank will be pulled further down the line and result in removal anyway. Wouldn’t be the first time that admins ignored names they found acceptable and dealt with later.