Ban Reason: Named a virus the, “N-Pass.” After being warned, named their new virus, “N-Pass 2.”, both turned the infected black. Very clear breach of rules 1 and 7.

Appeal Reason: The ban reason says that I was warned and then made a new virus, mocking the admins. It wasn’t like that! When the admins contacted me I explained myself and apologized then tried to fix the virus as best as a novice virologist could. What happened was that I made one virus right after the other because the first one had a dangerous symptom. Also I didn’t know that virus names were public.

Additional Information: I know that what I did was wrong, and I’d like to apologize again, it wasn’t my intention to offend anyone and it was a really stupid decision of my part, I understand it if my appeal is denied but I would like it for the reason to stay closer to the truth. Thank you for your time!

I uh, I think it was the whole N Word Pass thing. Using racial slurs is banned here, and those that allude to them are usually assumed to be shitters and/or racist.

Also, because 1984, all permanent bans that have any basis require 1 year and a vouch from a reputable server to be unbanned. It’s uh, wacky. See you on 6/10/23 I guess.

CMO from that round here. I may not remember it all very clearly, but what I do remember is that they were a very understanding and kind person who didn’t look like they meant any real ill intent, but still made a tasteless joke thinking that virus names aren’t shown which is, again, still a problem. A big one. Especially the symptoms.
They were willing to learn virology and what happened I feel was just a mistake not made in bad faith, and I as CMO was responsible for containing those viruses, which I failed to.
I want to believe that they didn’t release the second virus on purpose, so I also ask of you to review the logs again to confirm that. I don’t think they deserve a permanent ban if that is indeed true, but rather to reconsider the punishment.
They’re a very new player to SS13 just like me, only having 75 hours on this server and nowhere else.
Please consider it. I trust that they won’t make such jokes again because I see a lot of good in them, and I hope you would too. 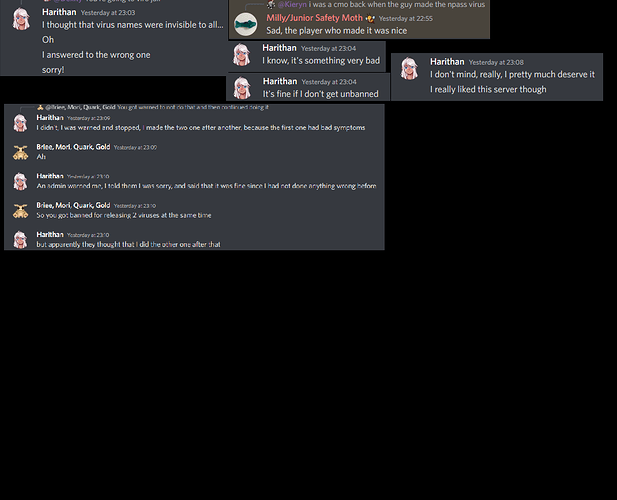 To add on this further, I included segments of the conversation that spurred this appeal.

I just want to point out, regarding “both turned the infected black” in the ban reason, that Revitiligo has the description on the wiki

Makes the host black. Every virologist’s first joke plague. No one finds it funny anymore.

Which, I’d say, makes light of the implied joke. If this is a frequent issue, maybe we should consider adjusting the phrasing on the wiki, if not getting rid of the symptoms entirely.

We can discuss this elsewhere. This isn’t the appropriate place for that.

New or not, the expectation is that you’re respectful towards others and to not be racist. It’s honestly an extremely low bar and a vast majority of people have no problem getting past it. Being new isn’t an excuse.

Regarding the ban, I’m not going to lift this prematurely. You were either acting in bad faith when you made the second virus, are underaged and failed to realize why this isn’t funny, or genuinely thought that was totally fine. Regardless of which it is, it’s an incredibly poor showing of your character and we’re not looking for these kinds of players.

The perma stands and will not be eligible for appeal until June 10th, 2023 with a vouch from another server with similar rules. I will not be changing the ban reason as I feel it is reflective of what happened.

Correction to the record. During my initial review of the case, it had appeared that the second virus was made after the initial admin contact. However, after re-review requested by a couple of people, I can now see that there was about a minute gap between the virus being created and the admin actually looking into the report.

Named a virus the, “N-pass.” After being warned, named their new virus, “N-pass 2.” Both turned the infected black. Very clear breach of rules 1 and 7. [zoom9337] Admin Report

The punishment will remain unchanged.