How long have you been playing ss13?: Maybe a year or two now.

Who vouches for your experience (if anyone)?: Nobody, though people like Tyranicranger would know that I’m good at what I do.

Game Experience (More Detailed): Significant hours as service/security/medical; I admit to previous notes of Shitsec but I believe I have more or less stopped such activites and focused on becoming a good seccie. Security officers seem to have much less advice and help nowadays; I’d like to answer their mentorhelps and help them not spiral into the depths of Shitseccery. I also have a bit of experience as a medical doctor, antagonist and surprisingly bartending. I have much less experience in the Engineering department.

If it helps, I can’t abuse the mentorhelp system because I cannot remember the IC names of other CKEY’s and vice versa. I have horrible memory when it comes to names. 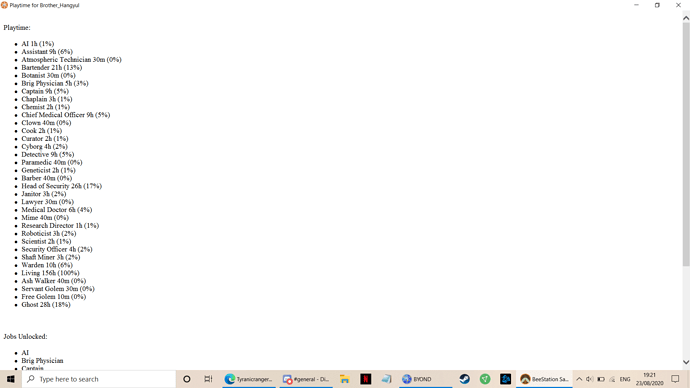 Rough total of alive and dead hours are 190~ hours of playtime.

in all seriousness: i would wait until 250+ hours
oh and sec players doesnt use mentorhelp, they’re called shitsec for a reason

I haven’t had a sec player ask something sec related so far
156 hours is a bit low, and given that the knowledge you’re bringing to the table is space law, I don’t think this is much…
6 hours in sci
30 minutes in engineering
The questions asked are more often related to atmos and sci, and most of the times they aren’t that easy, being either about circuits, fusion, tritium, xenobiology (and in depth) or nanites; the type of questions that just asks “What’s wrong” and they can’t give much detail because they have no idea what’s going on.
Do you have play time on a bee-like server?

I have a few hours on TG/station but otherwise no

Does experience in medical matter?

It helps, sure; I think it would help, can you go into detail about the nicher things you know and or tips on how to be faster?

I’m pretty good at surgery and I know how to treat all damage types, when to defib / clone, how to be more efficient and what equipment to always have on you; It’d greatly help a new medical player should they mentorhelp

By equipment i mean what you should have on you at all times; I take a brute and burn kit then fill a medical belt with a spraycan of synthflesh and essentially things to stabilise a person until they can get to medical

Based on interactions I had with BrotherHangyul as officer and HoS

False; stealing the chem dispenser is theft so the thief would be arrested. Everybody else would be fine unless they tried to free him.

That knowledge is a bit too basic and judging by what “nicher things” is to you, I think you lack in-depth knowledge; but I’m not gonna gatekeep as being a mentor helps you learn; +!

Am I blind or do you have no hours as engineer?

each time i met this guy he was either shitsec or dead and salting so idk what u want to teach people.
On each job that requires lots of time spend on it to understand it you barely have any hours.

Also just now i witnessed when this dude as head of sec beat monkey in bar and was drinking while mime was beating up everybody next to him, when mime was caught for him he decided its ok to shoot him with lethal laser gun while he was in crit and then “sacrifice” In chapel

mimes crimes were; general shittery hitting everybody and almost killing cmo.
he wasnt killed by mob and should have been dealt with according to space law

Next thing in the same round was hos committing mutiny, hop had his arms cut off because he bought self antag shuttle disco inferno, hop agreed to getting his arms cut off and that he did wrong and wanted cap freed, and told cap that he wants to die.
Hop killed himself in the end.

He didnt brig cap he was dragging him along on a chair in bridge for 40 mins now.

Attempted Murder To use physical force against a person until that person is in a critical state with the apparent intent to kill them.
And what cap did was basically cut off hops arms while hop agreed (and confirmed this when he was healed)
If there is consent and no intent of killing you cant apply the capital crime… “with the apparent intent to kill them.”
Especially if the hop endangered whole crew ?

Captain tried to kill the HOP; there was clear intent to kill since it was “assisted suicide”; even then, badRP. captain shouldn’t be killing his men even if they ask for it, same goes for the HOP. I wanted to have their trial occur sooner but the CC officer was crit’d by a meteor and had to be healed; I can’t control that shit

Disco Inferno has been okay in my experience

I know you can get lots of experience from playing security, but nohours as engi or whatever is cringe.
-1 from me

bruv u dont know the whole story and neither do i, but you didnt ask how exactly it happened.
You didnt ask any questions just immediately he valid me kill.
From what i have seen mime was fighting with someone and then cmo tried to break the fight and i assume he got beat up in a fight ?

He was already dead by the time I got there; as a head you trust the CMO, especially now that heads can no longer be antagonists. If he lied; that’s on him, not me. I was doing as he asked.

Also I don’t even know who you are; you’re probably some angry antag who’s mad I shot him

He was already dead by the time I got there

they dragged mime to you ? And you lethaled him while he was in crit i was orbiting you as ghost so i saw it all.

Also I don’t even know who you are; you’re probably some angry antag who’s mad I shot him

Also no sorry im a ghost who was laughing at you with other ghosts, also its not like u could even shoot me since you spend your shifts doing anything else than your job luul

Ah, I believed him to be dead; even then, he was attempting to kill the CMO, which as I’ve stated is a capital crime.

This shift was the only shift I went out of my way for a non-antagonist situation; I do my job consistently on nearly every single other round, as is displayed during a recent Blob round; I, along with PYLON and some other heads managed to actually destroy the Blob. I normally don’t diverge from shit like this, but murder is murder.

werent u the guy who executed clown for stealing shoes ?