You were screaming about how moths were bad for the crew and how they needed to be outed.

How is this a metagrudge? I don’t even know who you are OOC; all I know is that you’ve done shit like this before. 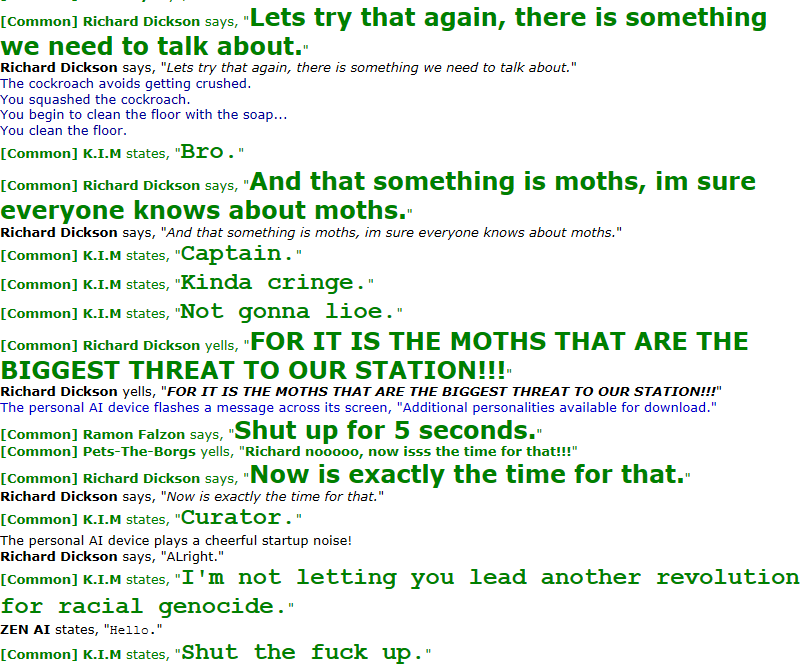 It was after the first lines that you bolted my doors down.

Ah yes, threaten to hurt moths and expect not to be acted against.

Also just the fact that you instantly stated that “Im not letting you lead /ANOTHER/ revolution for racial genocide” implies that you had metaknowledge/metagrudge from earlier rounds, especially since I havent played in a few days.

There was a racial genocide led by SWINSTON literally yesterday, I was referencing the surge of racial cleansing as of recent times.

That is still metaknowledge that you shouldnt have.

"You cannot attack or accuse players as a result of events that occurred in a previous life."

But I didn’t, I bolted you in because you were actively trying to lead a revolution against moths. The fact that you and others have done it before is merely coincidence.

There was a racial genocide led by SWINSTON literally yesterday, I was referencing the surge of racial cleansing as of recent times.

this is definition of metagrudge

A metagrudge is when you do something because of past events without any current reason.

Yeah this sounds like metagrudge to me, but its still extremely annoying to have another race war for the 5th time this week, repeating the same gimmick you have over and over again doesnt make it better

In this case, he tried to lead another genocide against moths. I mentioned that he had done it before and responded how I would normally.

Not a metagrudge, following law 1.

Seems like there’s some confusion, gonna clear it up.

He wanted to lead a crusade against Moths once more; he’s done this in the past. Seeing as he wanted to do it, I bolted him in his office and followed law 1. I mentioned that such events had happened before. This is not metagrudge, this is law 1. I’d play along if I didn’t have law 1, but I have law 1, therefore law 1.

Prisoners cannot be assumed harmful, unless evidence to the contrary exists…

If there was no evidence (from current shift) you should not assume him harmful and imprison him.

He was literally shouting about outing moths over comms during the same shift (The one i bolted him in).

I’d probably try less forceful routes during a greenshift but this was during a confirmed cult round, nobody has time for this shit during a cult round.

At no point did I make a direct threat towards moths. I wouldnt care if I had been in an active conflict with the moths or suggested that we should harm them, but all I said was that the moths are a threat to our station.

The reason why im making this report as a metagrudge is because instantly acted when I talked about moths, you locked me in the office as soon as I started to talk about the moths.

Not only that, you locked me out of the entire round because of that, since I didnt have the tools or any means to escape the office.

Also once again, you shouldnt have knowledge of past lifes or past events. If you get killed by traitors on the last round, you cant arm yourself to the teeth on the next one, thats just powergaming.

I also stated that I do not have the intention of starting a genocide.

No knowledge of past lives

Angelo Paulson has reference being PYLON, many people have bosted about killing traitors on previous shifts etc etc

If multiple racial genocides happen in the same week, CC (In the context of the SS13 universe) would be somewhat notified, as would NT staff. The AI is (presumably) conneced to Central Command news, and would know that there’s some sort of vendetta against moths.

Regardless, none of this matters because you were actively attempting to turn the crew against moths and trying to out them as a harm to the crew. That’s badRP, self-antagging and a whole buncha non-common sense.

Also, saying does not = doing. From what you’ve said, it seemed like you wanted to exile all moths. That’s still bad, since exile normally results in dead.