Add some missing stuff to Corgstation

Here are some things that I’ve noticed are missing from Corg.
Hydroponics doesn’t have a grinder and a chem master, which makes it difficult to find out how many chemicals your plants contain. 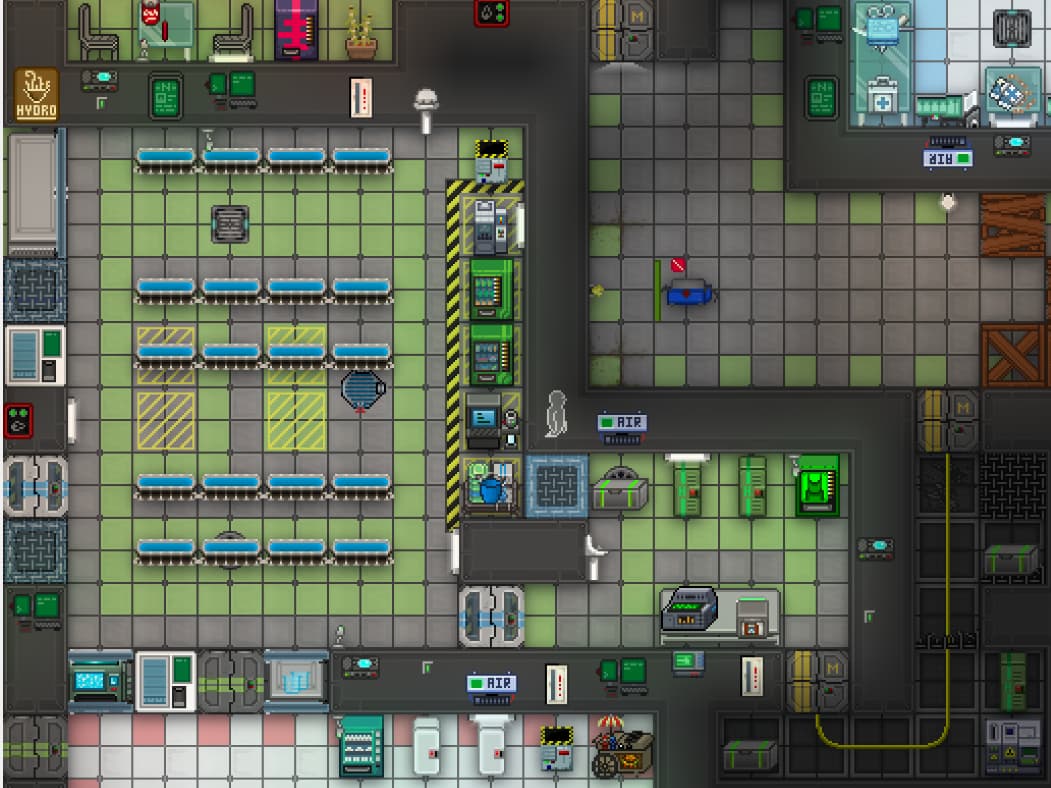 Virology should have at least two biohazard lockers at the entrance. 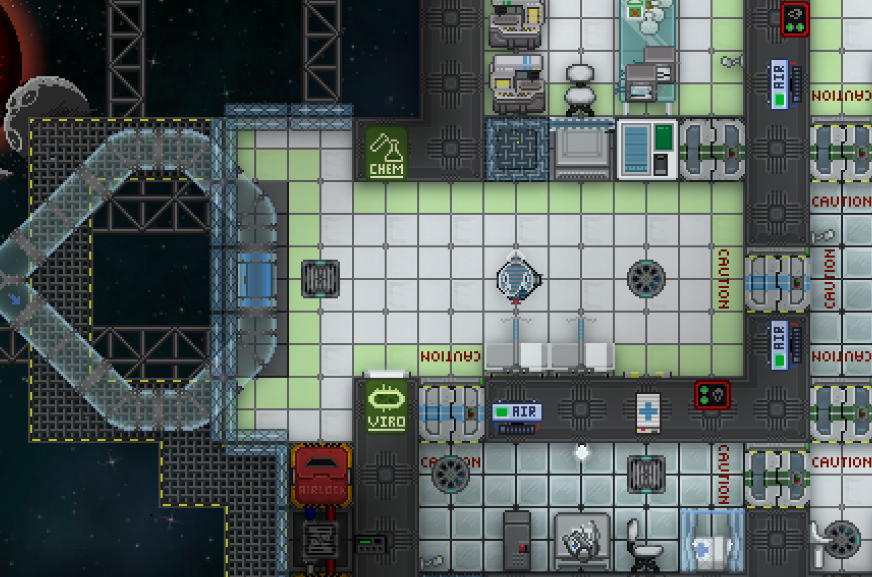 CE’s office should not have a door leading to a public hallway IMO. 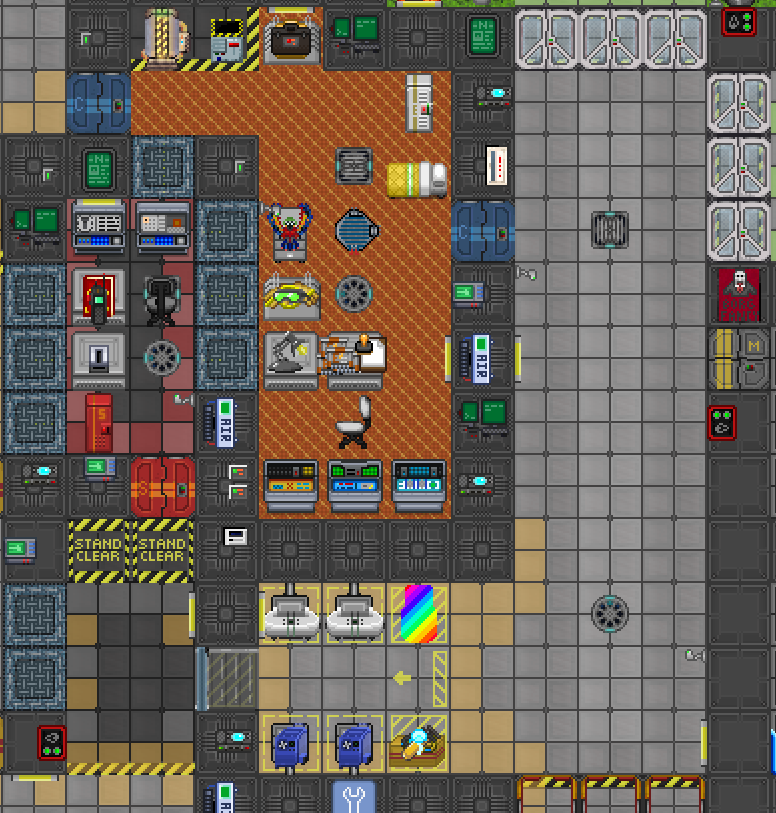 The way to the Chapel and the Courtroom is very awkward and several latejoin chaplains have struggled to find in. 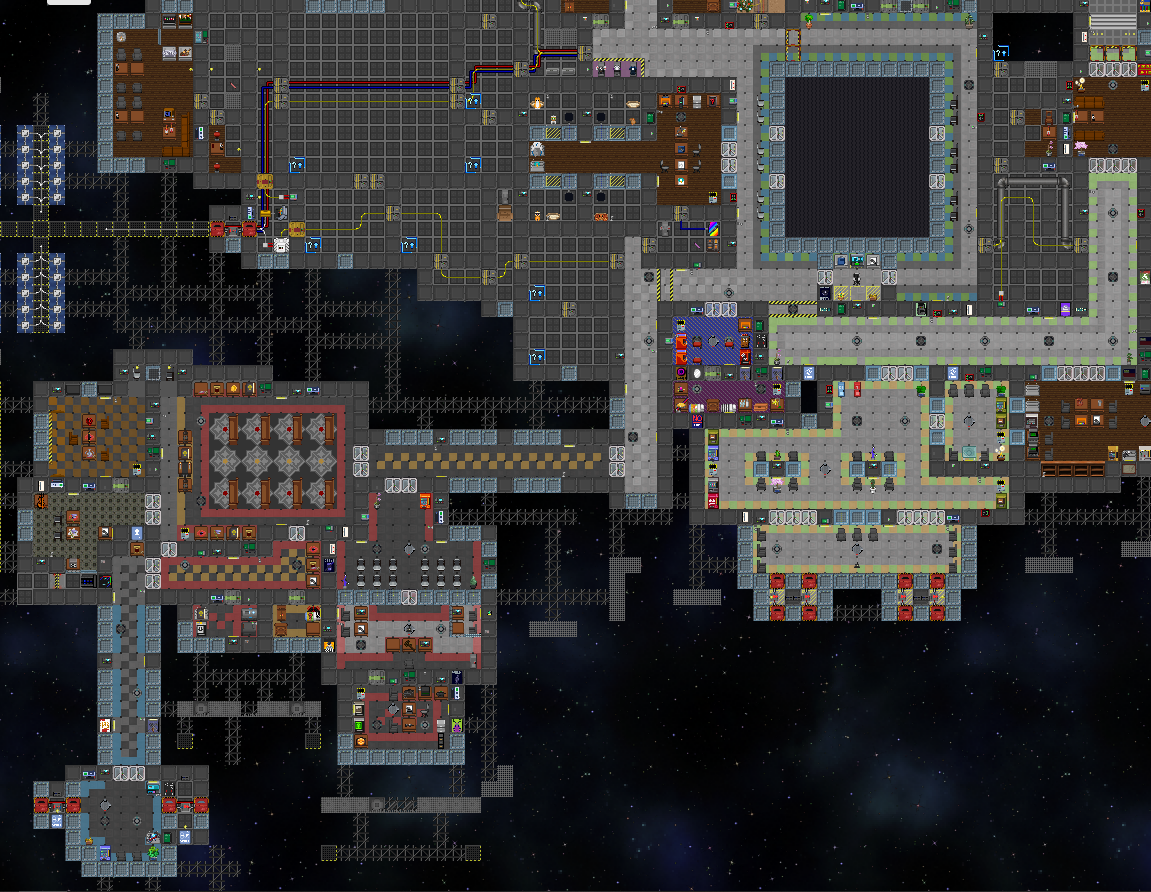 The Burn chamber in the Toxins lab should have a button that opens the shutters to space and the Air Alarm should be moved out of the airlock. 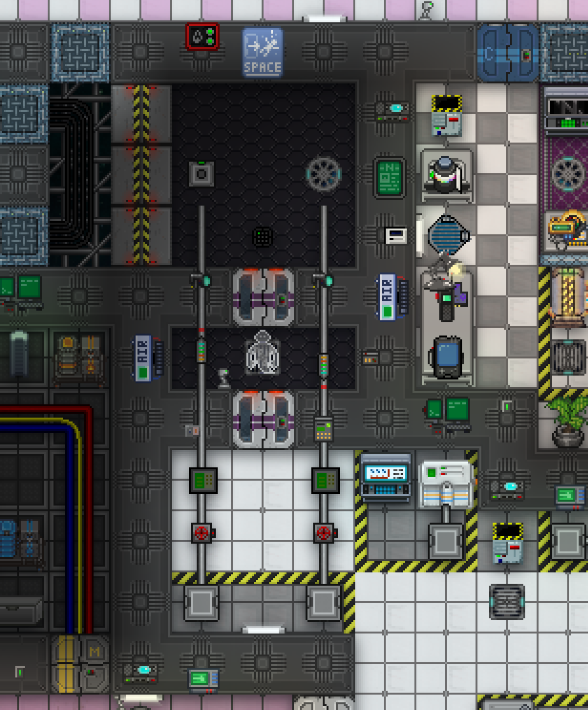 This damn wire should be fixed to stop Engineers from going crazy when seeing it. 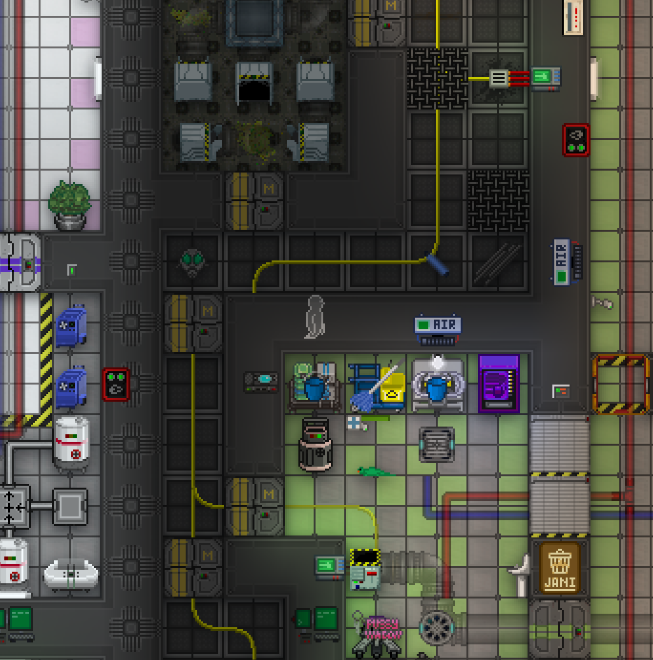 The highlighted airlocks should have proper names. Currently they show up just as “airlock” when inspected.

And finally, Robotics should have some spare cable coil, it doesn’t have any right now. 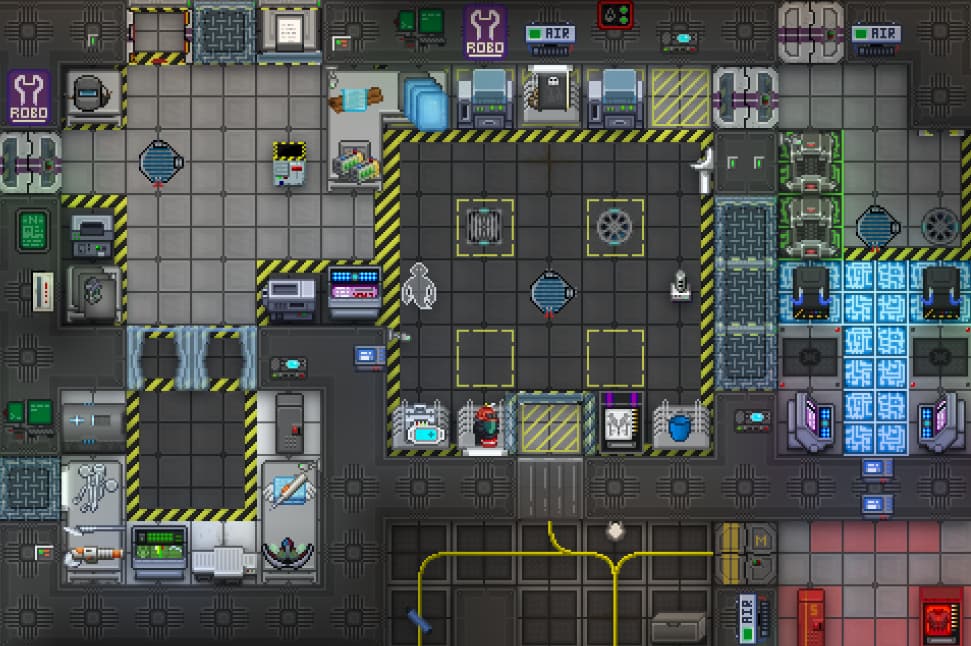 Also please add some canvis’s to corg and mountings for saving paintings.

Personally, I wish stations were less homogeonized and each had different non-vital amenities in departments.

Do you really want bonatists to run to the kitchen or chemistry each time they want to check a plant’s chemical contents? Remember how it was before botany had a minor chem dispenser, they’d just steal one from chemistry or build one themselves.

Do you really want bonatists to run to the kitchen or chemistry each time they want to check a plant’s chemical contents?

I think that’s exactly what Ruko wants, because they think it’ll make the botanist ask the chef or chemist to analyze it for them rather than just making them doorsurf or tablehop in. Maybe they will. I’m no clairvoyant.

I wish stations were less homogeonized and each had different non-vital amenities in departments.

This 100% as long as the design of the station is efficient.
I also never really liked how botany has their own chem machines really. Kind of makes them isolated from the rest of the crew.

All of the things listed are great points to be one-ofs on a single station each, not treated like must haves. Ask chemistry for chemical analysis of plants on the station without one.

I’m not getting into how incredibly stupid botany getting its own chem dispenser on every map was all over again.

The random element of plant mutations can be far too punishing if for every plant you have to bother a chemist for mutagen refills.
If anything it would only push botanists to using nerfed plumbing for mutagen instead.

The problem lies with saltpetre, namely in how you need a whole 100u of it to lower maturation speed by 1. And you can easily spend 5000+u in a round. Do you really think any chemist will give you that much?
I don’t mind unstable mutagen getting removed from the chem dispenser, you can reasonaby quickly grow your own after asking chemistry for some to mutate the pumpkins.

I’m not getting into how incredibly stupid botany getting its own chem dispenser on every map was all over again.

/tg/ doesn’t have them. You know what happens? One chem dispenser mysteriously gets transported from chemistry into botany, every single round. Also see my point above, botanists need way too much saltpeter for chemistry to comply with their requests.
Inb4 “but you can make saltpetre if you get lucky with the strange seeds”

Botany uses large amounts of saltpetre and mutagen. Where are they going to get those chems from without their own dispenser? Chemistry? what kind of chemist is going to be willing to pump out tens of thousands of units of saltpetre/mutagen over the round?

Grow their own saltpetre? With what oxygen gene? The nitrogen is only even obtainable from gatfruit.

Yes. I agree with this statement.

The problem isn’t even “oh I need to go out of my autsim fort and talk to people” it’s "the chemist can’t/doesn’t want to give me 700u of Saltpeter and another 500u in a couple of minutes. Botany requires chems on an industrial scale and that is something the chemist can’t provide unless he completely ignores making healing chems.

Cargo: Front Office needs reworking. Needs 2 tiles of space by the ORM so miners can drop off ore without having to push the Ore Box to the ORM. Also needs a desk with a window so someone can man the desk and interact with people outside the department, as well as letting people drop off bounties.

Atmo: still needs the spaghetti piping fixed, would settle for piping not being randomly hidden by tiles. Maybe indicator of which pipes go to SM and TEG.

The Station name above Arrivals needs to have the colour changed so it doesn’t look like it’s the entrance to Sec.

Move Gateway and Aux Base out of Maint.

Also needs a desk with a window so someone can man the desk and interact with people outside the department, as well as letting people drop off bounties.

Wasn’t this adressed by this PR?

## About The Pull Request The main part of this is to modify the front-facing c…argo lobby to add a desk that people can actually use, seeing as it was left out of the original Corg redesign. There are a few other very small QoL changes to help bring it in line with some of the other maps in rotation as well! This adds a few chest drawers across the map as well (in the HoP's office by the first desk, and in the new redesigned cargo office) as well as finally providing the HoS with their official stamp (which will see _extraordinary use_ in sentencing paperwork) and removing the Captain's spare stamp (no use in having a spare laying around, especially when they're not even 5 tiles away from each other on the map). I also added in the Ecto-Sniffer to robotics to bring it in line with other maps, as it didn't make much sense to have an entire PR for a single device. ## Why It's Good For The Game Having a front desk for the job that requires a lot of desk work is nice, especially to stop people from just running in the door the moment you open it to hand something off to them, or vice versa. Even if it's just as simple as having a place to drop off bounties, it's nice. The Ecto-Sniffer also helps cut down on robotics Positronic Brain spam for ghosts, by letting either side ping the Ecto-Sniffer to let them know that they're ready! <!-- Please add a short description of why you think these changes would benefit the game. If you can't justify it in words, it might not be worth adding. --> ## Testing Photographs and Procedure <details> <summary>Screenshots&Videos</summary> Here are the main changes to cargo, along with the very minor ones made to the HoP's Office and Robotics Lab ![Cargo Lobby](https://user-images.githubusercontent.com/97719613/185521145-baaf9506-3b92-4e6e-b35f-d2aacb9ed496.PNG) ![Paperwork HoP Chest Drawer](https://user-images.githubusercontent.com/97719613/185521208-42f86e0a-d8f2-4e5d-9bb0-d6d33ae59088.PNG) ![Ecto Sniffer Added](https://user-images.githubusercontent.com/97719613/185521216-fd2e7a48-6ea4-4266-978f-b84a26ab67d5.PNG) Below are where the additional stamps were added, to the HoS's office and QM's office respectively ![HoS Stamp Added](https://user-images.githubusercontent.com/97719613/185521264-50c0952e-2d4c-4fa0-9ec8-3347cb594419.PNG) ![QM Office Additional Stamps](https://user-images.githubusercontent.com/97719613/185521278-57a9baa0-1442-4b97-a395-78fa446f1374.PNG) The circled portion of the image is where the second Captain's stamp was located; as said, not even five tiles away from the one in the Captain's office. ![2nd Cap Stamp Removed](https://user-images.githubusercontent.com/97719613/185521284-9825cfe4-e5f2-4c6c-9190-600e222de088.PNG) </details> ## Changelog :cl: Impish_Delights add: Added additional set of deny and approval stamps to QM's office add: Added HoS stamp to HoS's quarters add: Added Ecto-Sniffer to robotics, to bring in line with other maps add: Added chest drawers to store paperwork in both the HoP's office, and cargo lobby del: Removed redundant Captain's stamp from quarters tweak: Shifted around RD & CMO stamps so they are not hidden under items at round start tweak: Modified cargo bay lobby to have a desk, consoles shifted to side /:cl: 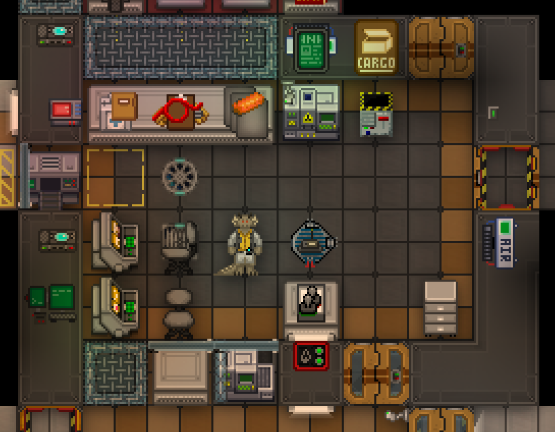 That’s fair. I think you can just message VickiMorris/ Vicki(Breathes-The-Ash) in the discord and she’ll fix it.

A few of these fixes were just merged last night

Removes redundant airlock in dorm maint, moves sci maint airlock, fixes sci main…t broken wire. Fixes access for bar, library, and cargo maint. Removes 2nd service protolathe in hydro maint. ## About The Pull Request Fixes a handful of issues with Corg maintenance, between broken airlock access, airlocks just not being attached to walls in some parts of maintenance, a wire in science maintenance terminating into a wall and possibly causing round start power issues, and hydroponics having *a spare entire service protolathe that only they can access.* This also gives shaft miners access to the Aux Construction base (as well as the bartender and librarian access to the maintenance doors connected directly to their departments). ## Why It's Good For The Game Closes #7344 and #7475 as well as fixing a few other issues. Having access to maintenance functioning properly is very important as well! <!-- Please add a short description of why you think these changes would benefit the game. If you can't justify it in words, it might not be worth adding. --> ## Testing Photographs and Procedure <details> <summary>Screenshots&Videos</summary> This should show proper access working for everything except shaft miners unfortunately (it also leaves out the second airlock I removed in dorm maint) https://user-images.githubusercontent.com/97719613/185682911-60829855-1bfd-4257-b44e-6b3ec26d50a5.mp4 </details> ## Changelog :cl: Impish_Delights add: Two hydro trays to botany maint to replace missing service lathe del: Random airlock in dorm maint room removed del: Botany private service protolathe removed tweak: Rearranged botany maint slightly tweak: Bartender and Curator can now access their respective maintenance airlocks fix: Shaft Miners can now access the Aux Base construction room via the bar maint airlock fix: cargo maintenance by brig now has proper access set on airlock, maintenance can be traversed without cargo access /:cl: