A guide to Janitor

Janitor is a chill job. You don’t have many responsibilities, and if you all you do is sit in the bar and drink, or go SSD ten minutes in, the only impact on the station is cosmetic. I’ve found that Janitor’s a good job when you don’t want to have a stressful round- just go around, making the red splatter go away.
But let’s say you want to be the absolute best at mopping up virtual carnage. Well, this guide has you covered.

The bucket can be clicked on in-hand to increase its transfer unit. At the maximum of 70, it can fill up the cart in three goes.

Don’t bother with floor signs: the holoprojector fits in pockets, can place dozens of signs, can be used on a sign to remove it or clicked in-hand to remove them all. People can’t move through it on run mode, but you can’t pull the cart through, so don’t block yourself in.

The Backpack water tank is incredibly useful, combining the best aspects of Space cleaner and a mop, (spritz to clean, no-slip, refill at water tank) but comes at the cost of you backpack slot. It’s your choice if that’s worth it.

Ask the HoP for botany access, so you can (on metastation) return to your lair faster, and use the botany water tanks.

Soap can be given to assistants for them to assist you. Just don’t give it to the clown.

Wear the galoshes, and wear a janibelt.

Both your map and your bucket fit in a backpack.

Ask chemistry for Cleaner refills. Bring them a spare powercell if you find one lying around.

Inquire at medbay about getting a medkit so you can be a ghetto paramedic.

BEG people to carry bleeding bodies instead of dragging the fuckers across half the bloody station like macabre paintbrushes. Get someone to make an announcement if you can. Or pull off the captain’s ID while he’s slipped, and go make the announcement yourself.

Carry a light replacer and a box of lights. This is the one real duty of a janitor.

Advanced sanitation almost never gets researched, so I wouldn’t use the janicart seriously. Sell it to the clown or give it away.

Medbay is THE hotspot for blood, being the magnet for bleeding people. Frequent it and ask the HoP or the CMO for access.

YOU CAN CLICK ON MULTIPLE TILES WITH THE MOP AT A TIME. YOU CAN CLEAN UP TO NINE TILES AT ONCE. Just don’t beat yourself bloody with the mop, you have to click the floor sprite.

If you want to get lynched, or if the clown is absent, mop under hallway doors and wait for that glorious squeak and horizontal spessman.

Your cleaner grenades are use-or-lose. At the very least, pop them all on the shuttle.

Often summoned to various remote areas and being attracted to the byproducts of violence, the unwary janitor often becomes the victim of nefarious actors. I get culted all the time as Janitor. Just think of it as a free antag token!

That’s all I can remember off the top of my head. My next guide might be on chemistry.

the fun mix is rotatium, skewium, anacea and cryptobiolin for a real screen shaking experience that you just have to endure

Jannie tip: your mop can be made into a robust(gimmicky and impractical) weapon by wetting it with stuff like metal foam, chlorine tri fluoride or fs acid

The real fun stuff belongs in the spray bottle. Carry two or have a partial mix of cleaner so as not to attract suspicion, and blame the chemist who “refilled” the bottles: if you got ahold of that stuff in the first place, there are probably some questions chemistry could stand to be answering.
Also, on another codebase (and possibly this one) you can put reagents in the floor buffer. I saw a video where some guy put ClF3 in and literally erased the floor as he drove along.

Also their buffer tends to get stolen by the clown becuase its tank can hold 1700u space lube and spread it everywhere.

You can beg the chemists to make you some drying reagent.

When put on your galoshes, they will automatically dry the floor you walk over.

Advanced sanitation almost never gets researched, so I wouldn’t use the janicart seriously. Sell it to the clown or give it away.

1: It gets researched more often than you think if theres a competent scientist making bombs in toxins, they’ll have enough points they can just buy everything. Ive seen plenty of times where janis arent checking the service tech fab and are still mucking around with round start equipment when adv sanitation was researched half an hour ago.

2: Although adv sanitation isnt a priority bluespace mining satchels are and the same research that unlocks those also unlocks garbage bags of holding. Which can fit on your belt slot and are flat out better than having your janitors belt, almost as good as having another backpack.

3: Even without the floor buffer I still ride the pimp mobile and pull the janicart behind me. Why? Its like a better pair of galoshes, theres no slip, no slowdown AND it prevents people from walking through you and pushing your cart halfway down the hall. 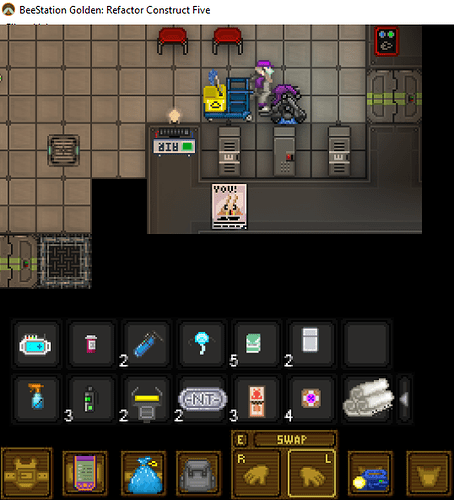 No mention of the bear traps, the water vapor, sharpened mops, ADVANCED mops, or ghetto chem space cleaner (grind light bulbs and glowsticks you find in maint and combine with water)

No mention that you can feed a light replacer with regular glass.

Unironically suggests using a janibelt instead of the INFINITELY MORE ROBUST TRASH BAG.

3/10 guide. Will update if you add these aspects.

Also on cult rounds you can work together with the chaplain. Have the chap bless a tank of water to turn it into holy water and then go apply that everywhere, either by mop or backpack water tank. It blocks jaunting and blood beams. See a cultist? Spray him with holy water.

When we could still play while adminned, janitor was one of my favorite jobs, both for the irony and the fact it’s just a really chill job that nobody misses when you have to vanish into a locker for 20 minutes to take tickets.

You get to occasionally slip people and blame it on them for not being aware of the wet floor signs (especially hilarious when the station has a ninja problem), and otherwise just chill and have a very relaxing time for the most part.

You cant play while adminned? That seems counter intuitive to make admins have to choose between being able to play and have fun on one hand or just being a bwoink ghost on the other.

There’s a lot more to it than just bwoink ghost, even if that’s all the average player that isn’t praying notices. Adminbus is an art best exercised in ways that feel natural to the round flow but also push things forward or introduce interesting twists.

Perhaps it’s the end of a Revs round and the Captain has been hiding in space for 20 minutes? Might just “encourage” him to get back on the station and make his last stand by removing all the O2 from his internals.

Perhaps it’s 30 minutes into a dynamic shift but antagonist generation is slow due to lacking threat? Well CC just detected an unidentified pod on a collision course with the station → Oh god oh fuck there’s 20 hivebots in Cargo and the pod caused a hull breach.

Another tip incoming: The Janicart can hold the following: Trashbag of holding (Fill with cleaning supplies, tools, antag items, ect ect.), 4 wet floor signs (For pranking.), advanced mop (Use nothing else. Ever.) and i think like 500-1ku of water (I dont remember the exact amount.

The janicart can also hold a pushbroom, which is the only way you will get the halls clear of all those foam darts if someone builds a donkco vendor.

Where do you even get the pushbroom?