Your trial-admin is a retard

Ban Reason: killed random lizard assistant with two other people. pretty sure its metacomms. the other two logged off instantly when i pmed him. appeal on the forums https://forums.beestation13.com/ . auth by zesko

Appeal Reason: Your absolute retard of a trial mod THOUGHT that I was in metacomms with some random fuckers on the LRP server when I beat up a ligger for being a ligger and also for attacking me beforehand. Then, he proceeded to ban me from the Discord server as well so I couldnt complain about his troglodytery.
TL;DR: I got banned because an admin THOUGHT I was metacomming with no proof. Spoiler: I wasn’t.

generally speaking, calling the admin who banned you retarded will not make them want to unban you, as just or unjust as it may be

Chill out and watch your language buddy. I’ll check on this when I get home.

from what I remember:
You claimed “Assistants were unnamed antags of ss13” when you did this, saying that alone is enough to ban someone for griefing. 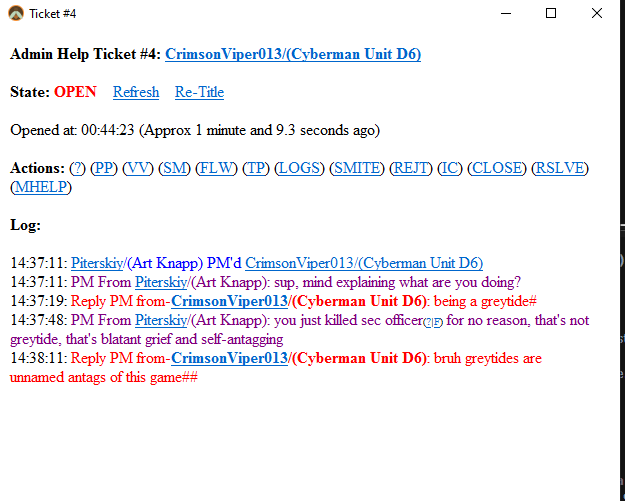 Perhaps the ban could’ve been taken down from a permanent ban if you didn’t call the banning admin a retard.

as the guy who approved this ban, you were doing some suspicious ass shit, iirc you logged out along with a bunch of dudes who were acting similar or somesuch, and then you give “greytides are the games unnamed antags” as an excuse for killing sec. To admins, you look like a griefer and nothing more

sup
zeskorion banned you from discord, not me 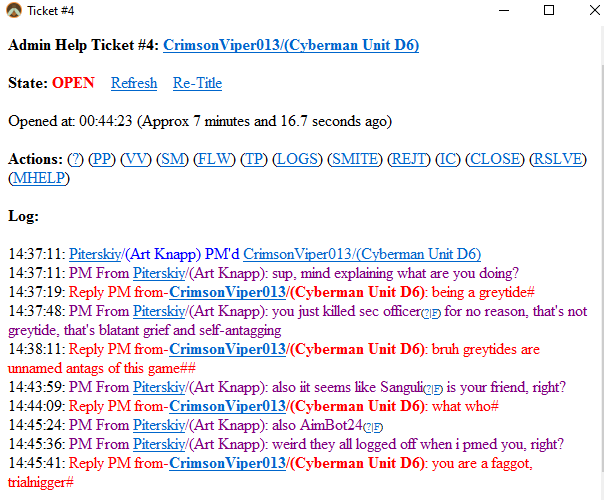 I asked you about these two players who were beating up lizard assistant with you for absolutely no reason. said accounts were pretty new and had less than hour playtime, which makes it obvious that they came here only to grief. after I told you the ckeys you suddenly start throwing insults at me, which is ultra-fishy tbh. after you critted that lizard with those players, you said CrimsonViper013/(Cyberman Unit D6) “he was a traitor” which is not true. also, you attacked a doctor who tried to heal him.
now, why I was 100% sure you were metacomming/metagang with those players.

I can’t think of a good reason to unban this guy.

i’m on the same boat here, can’t see a legitimate reason to unban the guy, unless they have other servers they play on that are able to vouch for him.

Pretty safe to say that this appeal is denied. Unless you can get other servers to vouch for you or somehow prove that you’ve bettered your play and attitude, this ban is here to stay.