Your favorite syndicate items to use as a non-syndicate

like, if you’re the captain, or the HoS, and you get a captured syndicate uplink, what would be your go to item

we all have them

try to avoid super high cost items or items that everyone already loves like CQC, the DEsword, and the emag, and do limit yourself to a couple, say, 3 or 5 or so, so no saying all of them are your favorite

personally, when it comes to me…

this is especially powerful when used in conjunction with the night vision security HUDs, and the fact that the new head of security plasmaman envirosuit combined with the other HoS clothing and the krav maga gloves quite literally makes you look like Batman

the amount of things that i witness as HoS while boxed via stealth implant because people think they aren’t being watched, pretty freaking high

you can also menacingly whisper to people behind their backs while stealthed and they won’t even know, because you’re fucking Batman by this point

i think i speak for everyone here because who doesn’t want their own fucking jojoke stand, it’s literally just a pAI but 100 times better and for the cool kids, brings ghosts back into the round too which is also cool and based

Nylaa, give me your best stand battle cry, because this is the superior pAI

it can basically fit any item that can fit in a box, which can range from packs of cigarettes to medical sprays to wallets and a whole load of other shit too

heals 90 damage of all types over the course of 2 minutes, and you get 6 of them

Box of throwing weapons is surprisingly robust. I like em, but I’m not really sure if those paper airplanes are the origami kit air planes, or just regular ones.

I like chameleon projector or stealth implant as well. Fun stuff happens with those.

I’d probably buy brief case telepad. It’s a pretty fancy item. I never had the time to use one, but I’d definitely use it as antag or non antag.

Honestly though, I rarely ever open traitor PDAs, my own or others, so I don’t have many favorites.

Not talking about syndicate encrypt key

Not talking about sleepy pen

Not talkin about fuggin’ thermal googles

Ahhh, sleepy pen is one of my favorites, but it’s not my first choice as non antag.

Blood red hardsuit. Because dying to validhunters while wearing it means dying FASHIONABLY.

I like to use the crab phone, is what they get for being capitalist pigs.

Emag,So you cana get everything a syndie agent can. And it opens multiple new options with certain maachines

Because i’m a powergaming nerd & a horrible person

Imagine not using an emag to help cargonia achive independency for the facist NT smh, the rounds with nulls and the whole station becoming a fucking playground filled with people with the most illegal shit ever while validhunters scream because they dont know who is antag and cant kill anyone inmediatly just for having syndie shit.
Also imagine not using the slipbomb to make everyone slip and laugh at the plebs sliping

Bitch you only like holoparas bc you get to break tator knees with them, but i still got greentext so hahaha loser

I got a question for you, did the past really happen? or is time an ilusion and the only past is YOUR MOM haha gotem

but holoparasites are the superior pAI 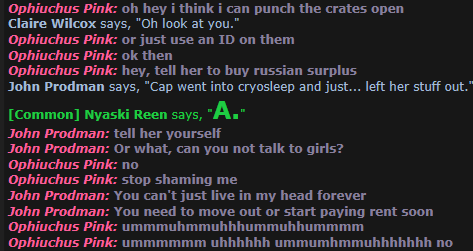 but chest rigs are somewhat of a powerful item, especially for their cost

very good for “going loud”, if you know what i mean regarding the term

Or just carry a wallet. Seriously, everyone acts like only lings use them, but I take them constantly.

I’d take chameleon kit more, but I usually play lizard, and hardsuit mode doesn’t hide my tail, which is stupid.

depends on the job, mostly, but usually as miner emag for cargo is good, or a pressure kit for “station emergencies” for the KA if the traitor was a miner kneecapped by a mega or “accidentally” shoved to lava by me, or just money briefcases if they already spent too much TC for the other two.
As RD i prefer to get either a hidden gun compartment for miners (a firefighter with an AC 12 on lavaland is one of the most beautiful things you can see as miner, since it takes about 10 potshots to take down a mega, plus the fast speed and decent armor when reinforced + reactives), any kind of illegal item that’s cheap (cards, for example) for illegal tech, or holoparas just in case.
An all time favorite for me is agent card, since you can scan access from other cards to add them up to yours, eventually youll end up with all access by helping people and borrowing their cards briefly in exchange.