CKEY:
Joe_Rogan_podcast
Admin’s CKEY:
Lagomorphica did the ban on yellingstone but it doesn’t really matter
Is this for both servers or just one? If so, which one:
Both
Which server did the ban happen on?
Didn’t happen to me
Ban Type:
Sticky ban
Ban Length:
Permanent
Ban Date (MM/DD/YYYY):
No idea wasn’t there for it
Round ID:
No idea wasn’t there for it
Ban Reason:
Ban evasion
Appeal Reason:
I’ve spoken on the forums about this before, but I can no longer play on beestation due to the fact that I keep receiving the sticky ban for yellingstone despite not using a VPN and apparently having an exemption. I’ve also been told to appeal here on a post I made on the general forums by a mentor
Additional Information:
This has happened in the past.

Are you using VPN, vm or pirated windows?

Nope, fully purchased windows 10 and no vpn, ive uninstalled all of my vpn’s and it still isnt working

Did you connect from VPN at any point?

Try to connect now, let me know if the ban message changes.

Nope, is still the exact same

It says “Sorry, you cant embed media items in a post”

You could upload and link it from somewhere like discord or imgur, if that helps. Thats how I had to get by for a time

Doesn’t let me put links in either, I can type what the ban message says tho, it says “Banned by host: Reason (StickyBan) You, or another user of this computer or connection (yellingstone) is banned from playing here. The ban reason is: Appeal on the forums if you see this ban message. This ban was applied by Lagomorphica This is a BanEvasion Detection system ban, if you think this was a mistake please wait EXACTLY 6 seconds, then try again before filling an appeal.” I’ve tried that 6 seconds thing and it just said the ban again.

You need to use the forums more before being able to use media (we had a couple of raids which required that). I’ve upped your trust level though, so you should be able to post screenshots and links now.

Try clearing your cache as sometimes that can cause the previous ban to stick.

Clearing the cache didn’t fix it but here is the screenshot. 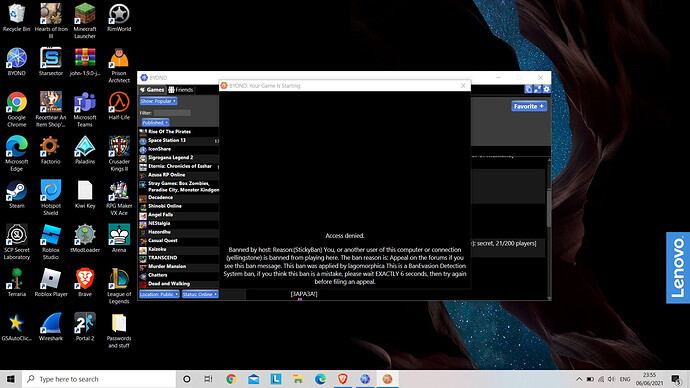 Hmm… Alright, I’ve gone into the backend and removed whatever associations I could find. Can you please try clearing your cache again and reconnecting? If it fails again, can you tell me which server you’re connecting to?

Hey im in now! Thanks for the help!

Happy to help! Have fun