Date (MM-DD-YYYY): Discord
There’s a link to a message in discord sent shortly after the round ended, whenever that was I can’t find out.

Round Number: No idea, first round I got to play CAA.

Incident Description: This wasn’t going to originally be a player report much like my first report on Spindel, but an admin told me it should have been so here you go. This is a link to what I wrote before, it’s pretty comprehensive.
https://forums.beestation13.com/t/now-that-the-dust-has-settled-vol-4/18255/8?u=darnthemarn

Additional Information: I was told this should be a player report and so now it is. Also inb4 locked for drama reasons

I know the round you are referring to and since you called CAA’s out, I’m here to call you out.

The full story is that Miriam and I were CAA’s, we met up at the bridge round start to talk to the Captain and see what was happening and make our presence known since they were test merged and people might not have known about us.

While we were talking, you walk past the bridge, throw a cigar on the ground, shoot it with your shotgun using an incendiary shell. Not behavior becoming of a person in a leadership position. We ask the Captain to have you come in to answer for your behavior since there was no HOS at the time. Since you claim to be well read on space law, here are some laws you broke.

Once you came in, you were completely flippant and did not want to respect the authority of the captain or us and tried to dismiss the problem. We notice that you had a laser gun on your hip which is breaking SOP on green as you can see below.

51157×557 26.5 KB
When we pointed this out, you said your shotgun was unloaded. I don’t believe this is a valid point, it is lethal-capable and thus should be considered a lethal weapon, and the laser gun has only lethal firing mode. Not to mention, you were lying out of your ass when you said it was unloaded. You whipped it out and shot buckshot at the door a little later when you had had enough of the situation, presumably thinking you had breaching slugs which are armory equipment and would have been another SOP break had you actually had them.

I then asked for you to hand over your backpack since I didn’t trust you on your word that that was all the weaponry you had. Lo and behold, you took the syndicate throwables kit that spawned in the armory. Another law break, SOP break, and powergaming I would say.

All of us CAA’s and the Captain were in agreement, you were to be demoted. It is important to note, you weren’t originally being demoted to a non-security role you were simply left as a deputy. You complied with having your access revoked and gloves taken but refused to hand in your shotgun and ran off before that situation could be handled. This was insubordination since the situation wasn’t deemed resolved and you just ran off on your own accord.

Deputies don’t have SOP but I would argue they should follow standard security officer SOP if not an even stricter one. So you having and refusing to turn in a shotgun as a deputy is another SOP break.

A good portion of the round was then spent trying to find you to have you hand in your shotgun that you obviously were not qualified nor allowed to have. At some point you were either fully demoted or got a job change to cargo tech, I wasn’t there for that part. Then from what I heard, you proceeded to salt in LOOC at the bar that we were shitters and such.

Sorry that we fucking did our job and stopped shitsec. This honestly could have been another player report with how you acted during the round.

TLDR: Babyrage from self proclaimed SOP and Space Law expert when they get caught breaking both, and get a lenient slap on the wrist.

And Spindel was apparently accusing us of metagrudging in LOOC in the bar so I LOOC’d a brief explanation to why Spindel got demoted and they just walked away in response. 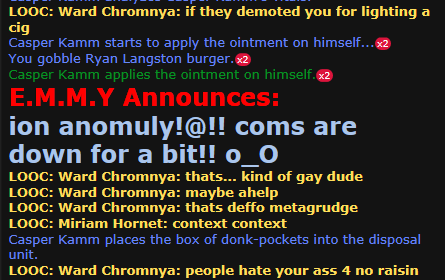 I’d like to add to that, that people in discord claim that Spindel has metagrudged the role and players who were involved. I haven’t played with them since the incident so I can’t corroborate this but I am throwing it out there for someone to jump in with proof if they have it

I don’t care what people said on discord or if i stepped on your imaginary space authority. Conversation with hackole was not about you. Please keep me out of your drama.

That’s rich coming from you. Nice way to handwave the entire rest of the post calling you out for your behavior.

If an admin chimes in saying that something should have been ahelped, maybe that should be a wake up call that you did something wrong, or are you too narcissistic to believe you could ever do wrong? Every other report you act differently but once I called you out with specific rules and reasonings you just try to deflect the entire discussion.

This speaks for itself. You flex your power as a security, then cry once someone reasonably and leniently retaliates within the confines of the game. I don’t think you are here to RP, as you can see in the screencap you WANT to ignore the lawyer and are mad at CAA for being something you can’t ignore. I have never had an experience with you where you want to RP, all you do is play whack-the-valid.

Care to explain how that LOOC with Ward wasn’t about us CAAs? I absolutely fail to see any other way that that line of conversation could have been about anything but the incident.

If this is as petty as you say it is, why don’t you explain how you did not do anything wrong and did not deserve to be demoted as you so clearly believe.

This speaks for itself. You flex your power as a security, then cry once someone reasonably and leniently retaliates within the confines of the game. I don’t think you are here to RP, as you can see in the screencap you WANT to ignore the lawyer and are mad at CAA for being something you can’t ignore. I have never had an experience with you where you want to RP, all you do is play whack-the-valid.

Just to clarify, are you reporting their ingame behaviour in that specific CAA round of yours or just their overall security behaviour?

That specific round, I think their overall behavior speaks for itself.

That specific round, I think their overall behavior speaks for itself.

Their overall behaviour is not something we can act on in most cases. We need specific evidence in form of round IDs, or other stuff.
Thanks for clarifing it though. Should make it easier for the handling admin.

Before continuing with the report, I must ask @DangerousVicious if they contest any of the following accusations, since I didn’t get to hear their perspective yet:

That is correct. They might try to weasel their way out of it with rules lawyering but they did do all of those things. It’s been a while so I can’t remember for certain but they might not have outright refused to hand in the shotgun rather they just ignored any requests to hand it in and ran off before the situation had been fully handled.

I was the AI this shift, it’s been a while and my memory is poor but if it helps I believe that I did hear something about Spindel not giving the shotgun yet and running off, but I could be misremembering. They also asked me to open the door to warden office so they could take walter since they owned them (I’m not sure if that part matters or not, but I’m just throwing it out there in case it does.)

It’s unfortunate that the meeting I was listening to via intercom turned into this report, I didn’t have context and thought it was just fun RP

Since Vicious by now has had almost a week to respond to the accusations and provide their own perspective (they have read and commented on the thread), I’ll finish processing this.

After log-diving i was able to confirm they broke:

R2 (powergaming) and R1 (roleplay) :
Multiple SOP breaches (You decided to use armory equipment on green alert as warden, multiple lethal weapons on green) and insubordination (kept the shotgun after being demoted).

Their ban-history of breaching SOP (and toe-ing the line with it) has been taken into consideration.
Because this incident relates to how they behave as security staff, this will be a ban from the roles of HOS, warden and security officer. This will NOT translate into a game ban.