The place to comment, with pictures, quotes, whatever form of content you have of the moment, the greatest moments you’ve witnessed in playing Beestation.

This is an old screenshot, it’s from the POV of Belone. In a round where I murderboned, 2 seconds before I crashed the server with the white ship (accidentally). Dead chat has and always will be mad 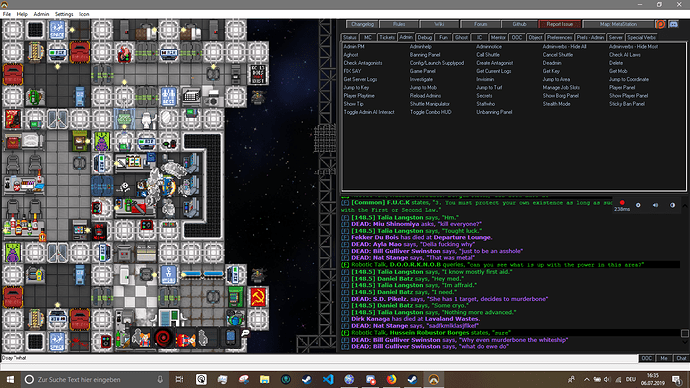 Another round of me murderboning, no clue who to credit with the screenshot 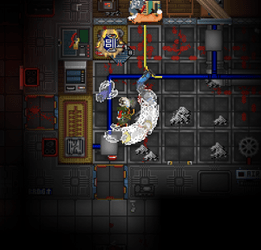 I was on MRP and wanted to build the insta-death recycler chamber for my target.

While building it, an explosion goes off, revealing some parts of it. I quickly try and cover those up and go back in the room to repair what I had built.

All of a sudden, the airlock opens. It open, no one had walked in. I stood there, waiting for the person who opened it to rush in.

Oganesson had popped out of thin air right behind me! He tazed me with his HoS gun.

I decided to go to the bar to brag about myself and drink
Then someone shined a laser pointer, Sirio used a flashbulb on me and after that round I started talking in the third person.

I walk into tool storage, grab some insuls

Alfred collins tries to take mine, i flash him

I know this guy, so i grab me an RPD and some soap
back at viro, i put the soap under an airlock

I make a disposals loop and a hidden disposals entry/exit

10 minutes later, Alfred comes in in full plate with a fireaxe and captain’s shit

He slips on the soap into the disposals loop, as I knew he would. Viro aint usually prepared for that shit, innit?

He calls for help, people come, slip… eventually there are like 7 people and a borg in the main loop (i had another one i could stuff him in if the borg was blown to breach the pipe)

plasmaflood happens, i die of heat while running an errand to wreck the robotics console for aformentioned reason

only survivors are in the disposals loop, and the lings (of course)

they all ghosted, in the end 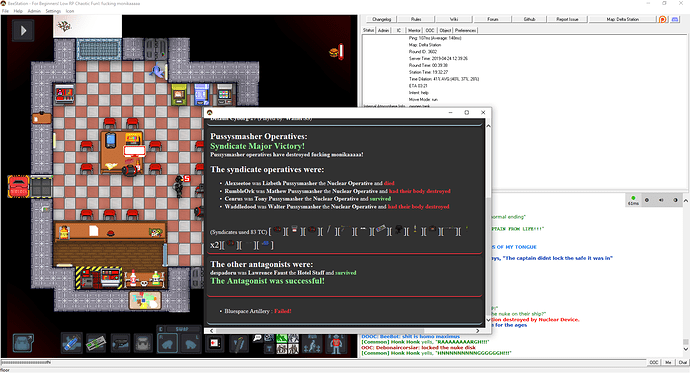 My first victory as an operative. I felt so proud taking the nuke disk from the captains unlocked safe.

Probably for me the time I (un)successfully stealth oped in war ops so hard that I was given the disc (by the station craptain) to protect it and then proceeded to get shot by my nukie allies while running to the ship. Lesson of the story is that chameleon kits are a bit too effective when used right

I think I remember that. Was the captain keeping the disk in the safe until the shuttle came?

More importantly, unless I’m remembering incorrectly, nukies have a marker that other nukies could see, so why the heck did he shhor you?

It is removed. I have magical bypasses to get it still that I will not share. Fear the nuke op with sleeping carp and a holopara.

the current state of beestation virology 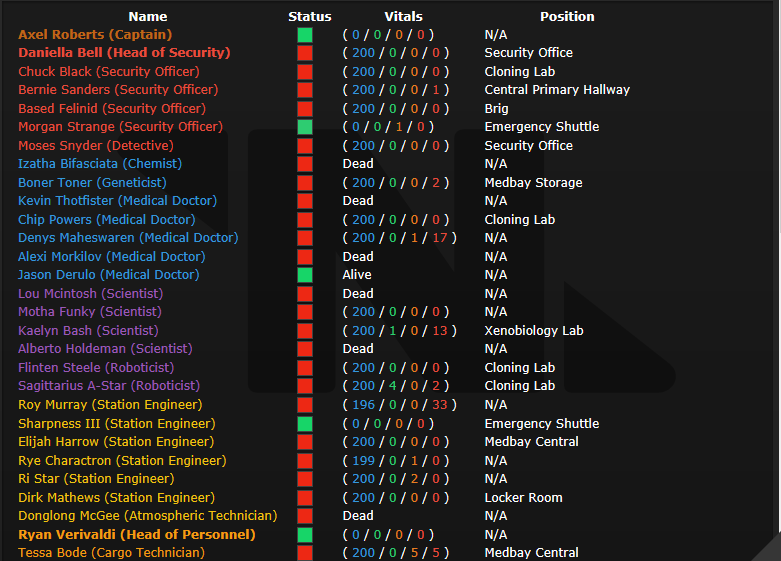 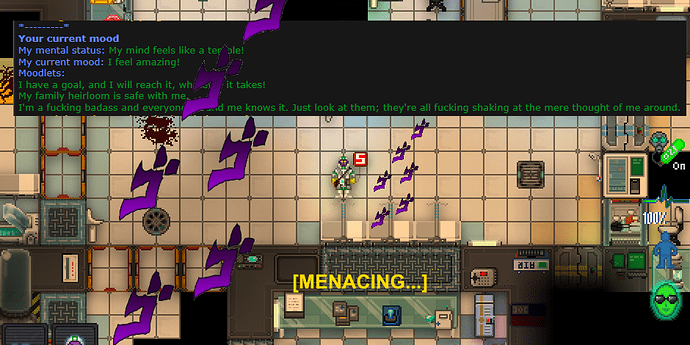 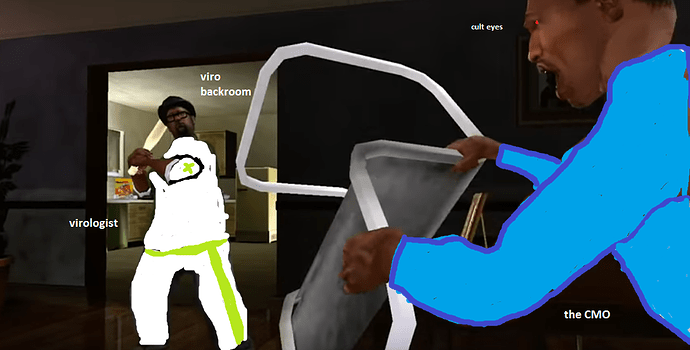 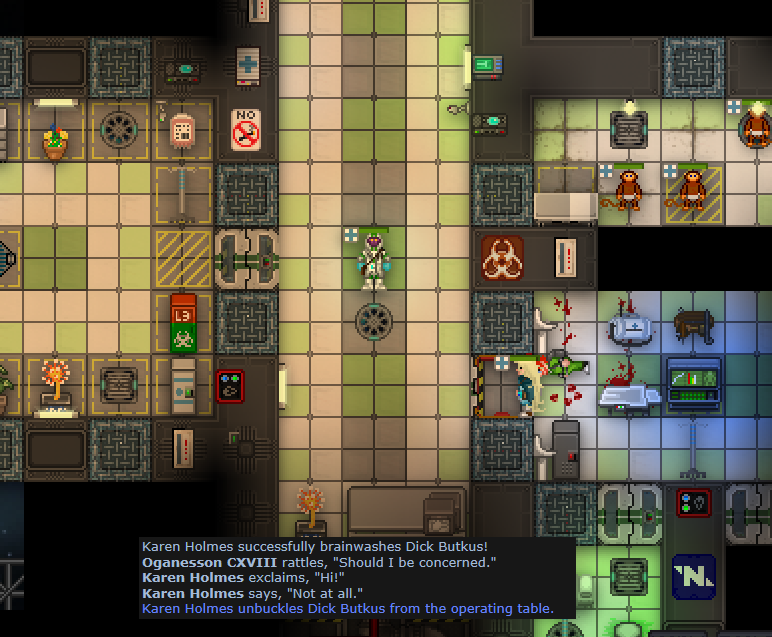 the fact that zesko wants to change virology to make it harder seems out of place, considering how only like 10 fucking people even know viro on beestation to begin with

My best momemt (no screenshots) was likely the SSB round where I became a lone OP.

I roll lone op, and proceed to buy, among other things, CQC, north star gloves, and a macro bomb implant. I then head to the shuttle to end some traitors.

Turns out, literally two or thee Death squads had been sent in. So, I do what any robust person would do, and proceed to kill one with my bare hands and some perfectly good corpse I found on the floor, before taking his e shield and killing several other officers and some traitors.

Eventually, the shuttle arrives, and no more DS officers show up, so I start killing traitors on the shuttle. This ends well, until the last two DS officers arrive with maurader mechs.

Unfortantely for me, I forgot to pack any form of anti armor weaponry, but I still manage to do heavy damage to the first mech via my shotgun. Sadly, this fight was absolutely rigged against me, since there was no way I was killing two war mechs. Eventually, I get downed, so I start plan B, and activate my macrobomb.

The end result is that 60% of the shuttle explodes, one mech just full on dies, and second receives high levels of damage, though it does still manage to crit the last traitor standing on said shuttle.

All of dead chat and OOC were laughing at how epic it was, especially the macro bomb. I was crowned the unofficial winner, and got this epic story of how one lone op stood against the world…and didn’t survive, but had an epic death that took others with him.

nah, my changes aint making it harder, they make it more INTERESTING as well as nerfing only the super meta mega death plagues of doom death everyone dies

i dont seek to make it harder at all. Though, i did just have an issue with beneficial beesease and how honey can put people in hyperglycemic shock due to synthesizing 7.5 sugar per unit of honey so i had to fucking make beesease synthesize INSULIN so the sugar wouldnt put people in a coma

How tf do you get the badass moodlet