1: I use the flash you know why?: Cause the flash is an insta hardstun enough for a headset removal, another flash, then a contract batong (Unless an ike decides to nerf it)

2: Keep your identity hidden, Use the agent id and chameleon kit, Use someone else’s name and blame them! If a shitsec is stunning you for no reason to tear of your clothes to see if they are chameleon, AHELP for some hard metagaming.

3: A way out: Make false walls into the location for easy break ins and outs

I will add more when i got more time

I won’t believe you until you show me your contractor greentexts.

I wish there were such thing as no telecrystal contractors 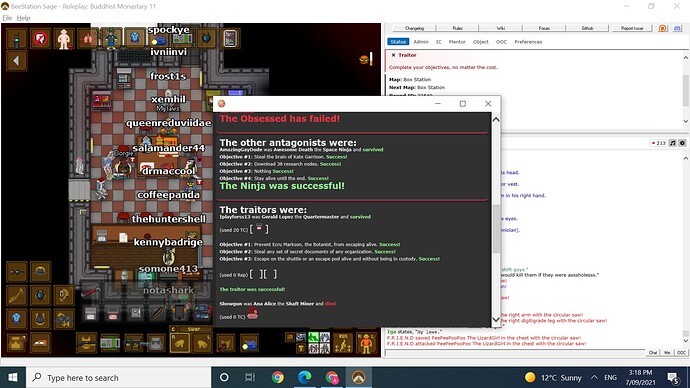 Well ahelping for people trying to check if your clothes are chameleons isn’t really what i would call meta gaming.
It is writtent in the lore that chameleon is made by one of the syndicate companies named M13, they deal with all the sneaky shit.
Your normal sec officer probably knows what threaten the station so him knowing the possibility of your clothes being chameleon wouldn’t be meta gaming.
If it was from a random assistant yes but not here.

to see if they are chameleon, AHELP for some hard metagaming.

“here is my contractor greentext”
did not contract anybody

i was here, during that round, too, contracted 5 people
you got captured in brig after killing a mere two people and i had to bust you out myself lol

The first tip is okay but not fantastic, as flash gets burnt out way too quick and you will be fucked over if they decide to wear glasses for one reason or another

the second tip is useless, on blue they have a right to remove your facecover and see who you are & it’s only useful to distract passing glance, not careful examination. that’s why i named myself some dumb meme - if they bother shift clicking you, you’re already found out

third tip is terrible, you’re only gonna take about 50 years to do so, you can be spotted while doing it, you’re taking a lot of time when you could just hack a door open and bolt it, and the only cool part of fake walls is when trying to setup a quick temporary maint base. anyone with mesons will find out about your base.

And finally stop boasting about being able to do no tc contractor. a second after your first contract, you will be found out and chased relentlessly in maints - and unless you got a solid gameplan, you will be fucked over.
and you really do not seem robust enough to handle that, at all