I will put my first story when i have time.

I haven’t really learned/remembered how to play well enough to get stories, but with this current world I’ve just been going through legends mode for a hour and found quite a few interesting artifacts/people. Going to tell the story of two people, well a demon and a dragon. Then a couple random artifacts that just have fun stories/histories.

I might take another dive and I’m actually close to just being bored enough to make a comprehensive history of the world. I will return hopefully with the story of Avuz Laborshakes, a necromancer dwarf that (at least to me) has had a interesting life so far. I’ll also try to go more through the list of artifacts and see if I can at least find the following:

So it was my second time playing Masterwork Dwarf Fortress. I embarked with a band of Orcs (Because Masterwork.) and we settled in an relatively wet temperate forest. This was around the time i stopped caring about cheating and found out how to use DFHack (This plays into the story.)

So about half a year in and my fortress is terrible. The water from the various ponds is coming in from all directions as i dig and i cannot dig deep enough to get stone. Until i find one spot.

Now apparently, i started with a vampire, i didnt know this at the time, until i found several migrants dead and drained of blood. I figured out which Orc it was and sent him deep into the mines.

Now vampires in DF are fun because they do not need to eat, drink, sleep, breathe, or basically anything required to…function. They just need to drink some blood every one in awhile. They are also practically unkillable by all measures.

So i decided to punish this vampire Orc in the best and worst way possible. I made him a god. I used DFHack to give him God-tier stats in EVERYTHING. He could do everything instantly with perfection. It was amazing. So i sent him digging in the caves, alone in his new eternal home.

So along comes a goblin invasion immediately following a migrant wave. My entire fortress above where this vampire’s home is dies, except for an small Orc boy and you will not believe me when i say this, a fucking pregnant alpaca.

Now i though i had sealed off this vampire and made him alone with a ton of resources (No food or drink because duh.). Apparently i was wrong. Not only did he have several dogs down there with him, but also the Orc boy and the fucking alpaca.

So i had the last surviving above ground Orc seal them in their tomb forever. And then set about turning this small dig out cave into a fucking masterpiece of art.

2 years on and both the dogs are dead. Turns out vampires only ~NEED~ to feed one a year. So he killed one each time. Strangely, he never killed the Orc boy or the alpaca. The alpaca miscarried from lack of water unfortunately but i found drinkable cavern water for the alpaca and boy eventually. I spent a lot of time experimenting with mechanics with my god-tier immortal Orc. He fought off everything that ever came from the caverns with perfect efficiency. He crafted masterwork armor and weapons for him and the Orc boy. We kept getting goblin raids but they were so stupid they couldnt figure out how to get in. They never brought any trolls. So they just milled around till they all starved to death.

I eventually abandoned that fortress after 3 years of observing that amazing god vampire Orc. Legends (Literally.) say he went on to found a massive vampire kingdom w/the Orc boy at his side since at some point he turned him into his “vampire apprentice” or something.

Unceremonious bump since i made this late at night its unlikely most people who are on during the day saw it.

And i want people to share their fun stories.

I am away from my PC now, but I remember a few funny artifacts that exist in my current playthrough:
A floodgate that has an image of itself on it in native gold.
A mechanism that has an image of the floodgate above. I guess the floodgate on the image is identified by the fact that it is a recursive floodgate image, so to depict it at least half-decently you would need to draw it three times minimum - for the initial floodgate drawing, the floodgate drawn on it and once again to make it totally recognisable.
My friends pointed out to me that the image on mechanism is obviously an instruction, so for perfection I need to make a lever from it and link it to the floodgate, but I had magma surrounding it, so it is not an easy task right now.

My friends pointed out to me that the image on mechanism is obviously an instruction, so for perfection I need to make a lever from it and link it to the floodgate, but I had magma surrounding it, so it is not an easy task right now.

Peak Dwarf Fortress players have everything surrounded in magma. Including their dwarves.

I think your floodgate is being worshiped as some sort of holy object though. And considering Dwarvish religion in general this would not be a surprise.

I had a dwarf who worshiped the concept of cheesemaking once.

Also a part of my map looks very similar to a vomiting parrot. 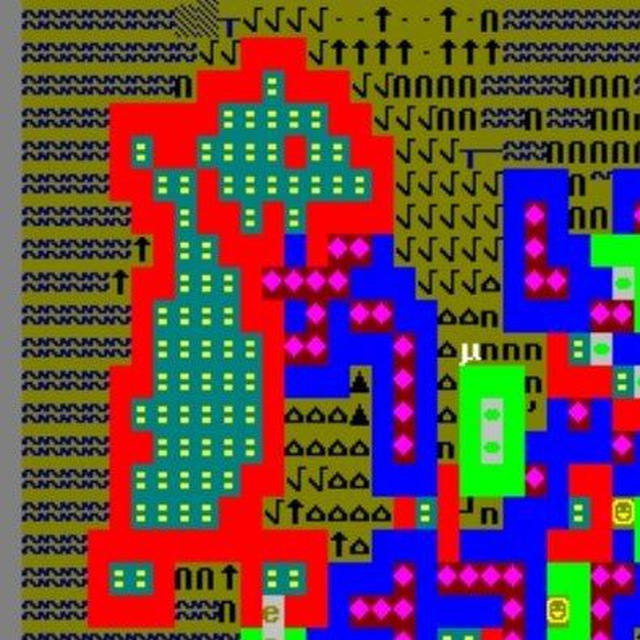 You can put some in here too.

Build farms underground, about two levels deep in most areas should still have perfect soil. Keep your animals right outside the gate to graze.

Actually Rimworld is a great introduction into DF.

It’s not as hardcore, and the UI is logical and intuitive. I recommend anyone play that before DF.

At least until the new steam release comes out.

Animals to graze you say? My fortress is called “Frozenbucks of Doom” for a reason!

Why did we even come here? There is nothing here! Help u^#&y5E{NO CARRIER}

Only ice, snow, vomit and more snow. The ocean never melts. There are caverns deep down, but there are too many forgotten beasts already. Sometimes the lever is pulled and a wallgrate opens. Then the dwarves collect cobwebs, chop trees, haul everything back inside and lock everything back. Too dangerous to do anything else.

Pump magma up to melt everything. Works great. Just make sure that your fortress is water tight.

And that your dwarves dont need to worry about temperature as much as other things do.

I don’t really have many stories from my last fort
(Which i retired due to low fps), so here’s my adventurer killing a gobbo with coins:

There is a surprisingly big number of worlds that end in necromancy dictatorship. These worlds are just overrun with practitioners. In some sense, it is some kind of a transhumanist dystopia where death can only fully occur when you become a pulped mess.

Yes, this is a bump to prevent the thread from closing. I had no time to play DF lately so I had no particularly new stuff to post.

“Fixed” that for you.
Seriously though, necromancers should be able to make the people they raise sentient. Then it would truly be a transhumanistic paradise.

should be able to make the people they raise sentient

They already do. I saw “Corpse of Urist McBeardfisher married Susan Yadayada” multiple times.
Edit: In legends mode on HistFig level at least

should be able to make the people they raise sentient

Most recent big update this is true. Necromancers can make minions and experiments which count as sentient and sapient.

The RNG experiments are fucking horrifying.