The Maggot Guy banned by Rukofamicom

“must’ve been banned by a wom*n who didn’t get her hot chip fix today” Hmm yes, today I will complain about my mute for sexism by making sexist comment.

Appeal Reason: I can’t possibly fathom why we’re not allowed to shitpost well known copypasta videos spoken by characters who could just as easily talk about overdosing on ketamine or committing numerous war crimes in albania. Is shitposting bad now? Why did I not get banned for all those times I advocated “killing and eating the Italian People” because, quote, “they make good food”? This is really fucking bizzare, especially from such a usually clear headed admin as @Ruko.

Additional Information: I, The Maggot Guy, hereby solemnly swear that I do not believe all women born after 1993 to be liars. Neither do I believe women born after 1993 eat exclusively “hot chip”. I have actually seen women eat sour cream and onion chips, nacho chips, and possibly other kinds of chips, but being that I don’t stare at people while they eat or try to remember what they eat I cannot personally confirm this. If necessary I can contact my Aunt in Tennessee for more information regarding the matter, although she was admittedly born before 1993. I do not believe that all women born after 1993 are bisexual, nor do I believe that all they know is “Mcdonald’s, charge they phone, (or) twerk”. I have in fact seen several females charge IPads as well as phones so I can confirm this is not the case.

To reiterate, I do not, and have never believed anything said by Lego Yoda.

Edit: fixed a typo and added the word “video” for clarity

No, this isn’t a shitpost 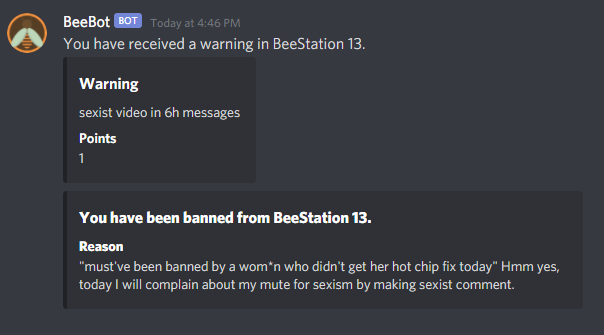 what’s next, banning people who say “the industrial revolution and its consequences have been a disaster for the human race” for spreading a terrorist’s manifesto?

Not a video or copypasta I’m familiar with. What I took from it was the whole “women belong in the kitchen instead of doing what they want”. Ironic sexism is still sexism to me. Considering how the other admins are mocking me for it, it would be appreciated if they posted an actual opinion publicly saying otherwise.

I still don’t agree with considering discord appeals for permabanned players to begin with. You were muted for the meme, but you were banned for the comment you made immediately after. Based on the responses I saw in the salt mines to that, I kind of thought this was justified.

My stance is to keep the ban until there’s substantial support for lifting it from other admins who are willing to openly state their opinion.

not relevant but ironic racism has the same effect. it’s still racism

but maggot is with the herd. he cares a lot, if he agrees with what u said about ironic sexism i think it’s ok…i have an iq of 340

The meme is how stupid the tweet the copypasta was refering to is. The meme pokes fun at how stupid that tweet is. Its not meant to be sexist… (well the dumbass tweet is but its not the reason people copy it)
It’s meant to mock sexists not be sexist.

yeah. The whole point of saying it is because of how absolutely stupid the original comment is. It deserves to be mocked. It’s like with those “how do I turn on a book” boomer cartoons, the people reposting them are mocking them.

Not a video or copypasta I’m familiar with. 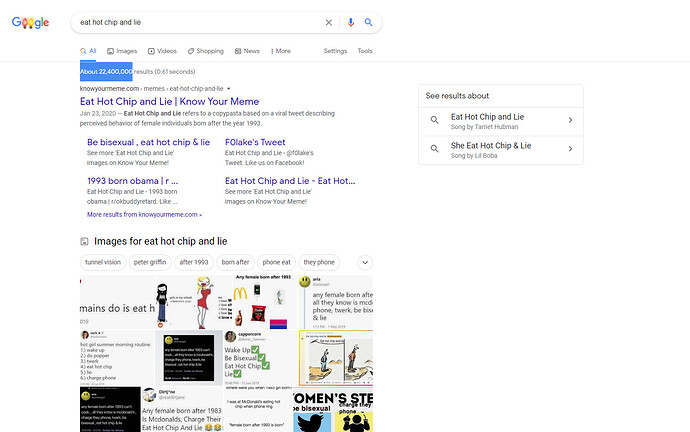 Ironic sexism is still sexism to me.

not relevant but ironic racism has the same effect. it’s still racism

sure, if that’s what this actually was. But you don’t actually think the people saying “the industrial revolution and its consequences have been a disaster for the human race” actually want to fucking bomb the powerlines, do you?

And it’s not like I even dropped the quote by itself, it was a video of Lego Yoda with the haha funny yoda computer voice and a Lego Yoda Deathscream at the end. I mean sure if it was constantly a bunch of really weird sexist things, but posting a single, well known meme once doesn’t really warrant a mute or a ban.

Also the salt mines are for being salty??

edit 2:
an example of the wildly popular yoda voice 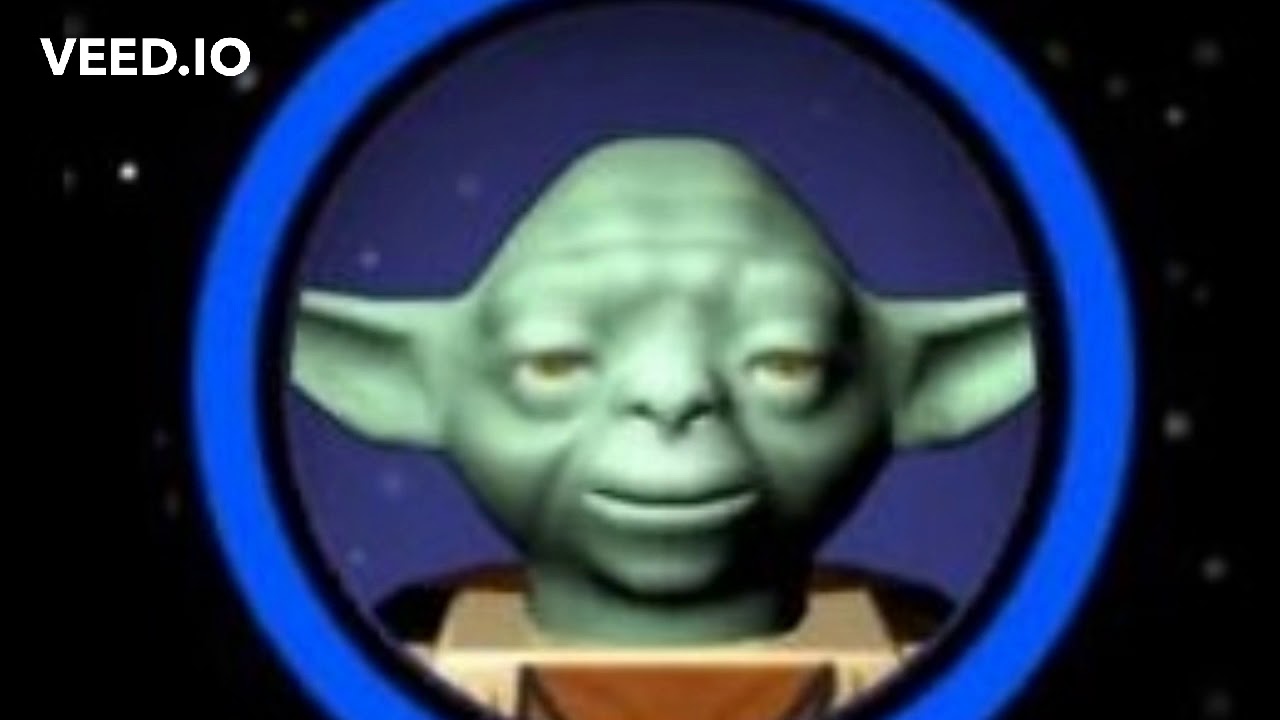 sure, if that’s what this actually was. But you don’t actually think the people saying “the industrial revolution and its consequences have been a disaster for the human race” actually want to fucking bomb the powerlines, do you?

i don’t actually think it was that. i know this joke. it’s been around for like 4+ years. lmao i was in high school when i was laughing at this

but this comparison? to articulate up my confusion with it: yes i would fucking bomb the shit out of those stupid ass powerlines. they need to go. NEED to

Considering how the other admins are mocking me for it, it would be appreciated if they posted an actual opinion publicly saying otherwise.

Wait wait wait, is this another one of those situations where there’s like 30 hidden admin comments? All of which are shitposting about girl born after 1993?

…I’d pay money to be a fly on that wall, ngl

Also can I post the video in question here?

just to be clear tho…and not just bc ruko is drowning in shark-infested waters…he’s not wrong. ironic bigotry has become some pathetic excuse to pass off genuine bigotry as satirical justice. it’s n o n s e n s e

It’s meant to mock sexists not be sexist.

In a Yoda Voice:

Transcript of the video - without prior context there’s no way to know this is supposed to be mocking something so I have to take it at face value for the content it has.

Ironic sexism is still sexism to me.

ironic racism has the same effect.

Those three quotes sorta sum it up for me. Maggot, your stupidity seems to have finally caught up with you. I’m with Ruko on this for now.

“Ironic” bigotry is useful, since whenever someone calls you out for being a racist or w/e, you can fall back on “oh, I’m not actually racist/sexist, it’s a joke!”.

Ironic racism and sexism is fine and your argument that it can be used by actual sexists or racists to excuse their behaviour is shit and so is banning the people being ironic.
Why? Because you can easily tell when the joke gets overused and old for the sake of actually being racist.

There’s this guy on Omegle that dresses up like the joker and there was a clip of him doing the Hitler salute with someone else, perfecly coordinated and because of that it was and still is pretty funny if you see it, but this same guy goes around telling black people on the same site about how much he hates gamer words and he does it way more than once to otherwise friendly sounding people. People also say in the comments he’s an actual racist because he turned bitter supporting my suspicions.

There was also a guy on Beestation who kept on saying how much he hated woman as some sort of gimmick, but he kept spamming this on comms and in all his interactions that instead of a meme it became excessive and distasteful.
Now this could have been just a reeaally shit gimmick conjured up by some autist, but I feel it may not have been.

Lastly Maggot used bad spelling and censored the word wom*n, which is an obvious way to show you’re meming. It’s like saying kappa after something when you’re not serious, although that’s rarely used nowadays.

In short I think it’s stupid to ban people for being ironic unless it’s obvious they are not and it was really fucking stupid banning Maggot since you could see it was an obvious meme even if you were not familiar with it.

you get muted on a daily basis.

most of the people on the discord have grown to dislike you.

i think this is the time to stop dude, not being mean but you clearly do not fit here.
just do what i did and accept the opinions of others.

when racist jokes are coming from a person who doesn’t give a shit about equity, then it’s fair to assume that the person is prolly racist

i’m not trying to be condescending, but i think u need to understand just how easy it is to blend in as a genuine racist amongst ppl who say ironically racist shit. it’s really really not that difficult, and that’s for a reason

this took me 30 minutes to write out i have problems

Then why not let the actual racist just do his thing as it seems to be ironic? If no one notices it then it’s not really a problem then, is it?

If you get angry at ironic racism then you’re getting angrier at the jokesters than that you are getting at the actual racists, which is just weird and not who you should be angry at.

also eat hot chip and lie should not be bannable material. Smh