Round ID:
32104
Ban Reason:
After being told they weren’t allowed to plasmaflood, argued with me in the tickets. And then when Sec caught and killed them salted in deadchat and was complaining about the ticket.

Appeal Reason:
I was a traitor with a kill objective on captain and the sec force was hot on my trail. Wanted to see if I could plasma flood to cause some general chaos, and maybe be lucky enough to kill my target. Admin told me it’d be overkill, so I asked what the penalty was, and the admin said perma, I said rip lrp, (which could be be the arguing thats referred to). Anyways, so dreams of a heated station out of my head, I left to try and sneak around the entire security team to get to the captain that spent a majority of his time chilling in the brig (pretty hard to reach him there). I was immediately flashed and beaten by two sec officers before I even got 3 steps into the main hall. From there I was promptly dragged into the gas chamber without even so much as a word to defend myself. After that, I was pretty pissed that I had to somehow work around a security force that was much better armed than I was. I salted in dead chat lamenting the fact that I wasn’t allowed a smidgen of plasma flooding to level the playing field. No slurs were uttered, no mothers were dragged into this, I kept my salting relatively clean. I personally do not think trying to negotiate a plasma flood and then salting is grounds for a perma. Maybe a week if the admin got especially hurt by my irritation.

TLDR
The punishment applied is way overkill. Mans did not care for me replying. Lemme back and I give u kiss on lips, yes? <3

The punishment applied is way overkill.

No, it definitely isn’t. You and your attitude aren’t welcome here. 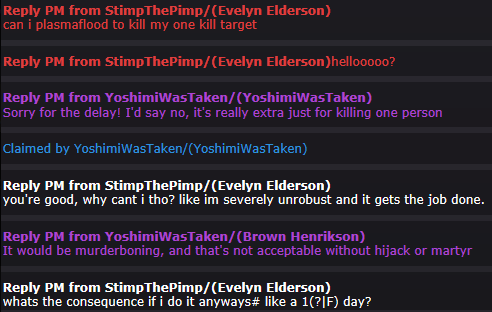 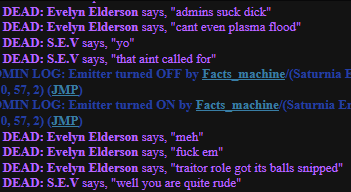 Come back in a year with a vouch from another server for good behavior, or don’t come back at all.

I hope you like being pinned on the wall of shame.

Intentionally breaking the rules anyway after being told not to will result in permanent bans.

Being exceptionally rude afterwards certainly doesn’t help us think you’re going to be a good player worth keeping around.

It’s been pointed out that my prior post was a bit misleading:

No this player did not plasma flood. They were removed due to the ticket conduct + salting in dead chat - we don’t want to take the chance on keeping the player around after seeing what went down here. This was a Rule 0 ban. Not every player needs to fuck everything sideways before we have judged they aren’t worth the trouble to deal with later.