Somebody you use to Ban

CKEY:
BanID #24117
Admin’s CKEY:
WhyIsCaecitustTaken
Is this for both servers or just one? If so, which one:
Sage Roleplay
Which server did the ban happen on?
Sage Roleplay
Ban Type:
Single Server
Ban Length:
Permanent
Ban Date (MM/DD/YYYY):
2021-03-01
Round ID:
ID 27509
Ban Reason:
Gave a bunch of guns to Cargo for o reason
Appeal Reason:

Additional Information:
BIG NOTE!!!: this is a Parody of the song “Somebody i used to know”
so there for its a Joke

LK tho, context of what happened. what were you when you enabled guncargo?

LK tho, context of what happened. what were you when you enabled guncargo? 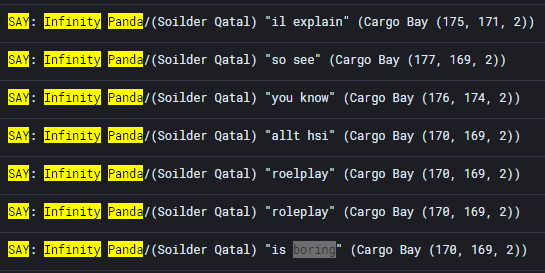 This is the real reason the ban was skipped to a permanent RP ban instead of just being handled as gun cargo. Outright stating that you don’t like roleplaying while being bad at roleplaying is a pretty good way to get booted from a roleplaying server.

I still don’t see any reason to lift this. Not only do I still not believe this was just a joke, but after skimming the logs to look for this I can say your typing habits are so horribly atrocious that even genuine effort might not make up the difference.

You already have bad grammar to start with and then churn out constant typos on top of it. You also repeat yourself to correct them instead of correcting what you type before you send it. We don’t have any rules for this, and certainly don’t expect perfection, but this is just so far gone that I think it’s worth blocking the appeal on Rule 0

What was he though when opening the crates, QM? Or sec?

He was warden passing out guns across the station for no reason.

I agree with this. While a meme is fun ban appeals are not the place. Especially with a history.

how do you edit text in game?

You read it before hitting enter, usually as you’re typing it.