## About The Pull Request By the request of Crossedfall I made a TEG engine f…or pubby station. This is the result of that request. ## Why It's Good For The Game Radiation engines are easy. If you want real engineers you take a TEG SM reactor. ## Changelog :cl: add: Overhauled engineering compartment with new and improved TEG setup. add: A new, fancy SM chamber monitoring console so you can see exactly how fucked your gas mix is without a SM monitor. (Useful for if the SM ever gets dragged away somehow.) del: The unrobust Radiation Collector engine. tweak: tweaked engineering gameplay slightly, and probably a few engineering mains' nerves. /:cl: Below is a proof of functionality test. This setup has not been changed from the round-start configuration. ![9c7723fc737fb25672dc372c5b718c37](https://user-images.githubusercontent.com/43328793/79612455-b6fcee80-80ca-11ea-98e5-4415744c0b3c.png)

I found that this step-by-step process provided by the Vasily now results in an eventual delamination and your N2O cooking off, likely due to fastmos. It doesn’t mean it won’t work, however. What needs to happen is you need to establish a safety point where emitters can fire on the SM and the TEG cooling keeps it from generating hot gas. This is how I do it: 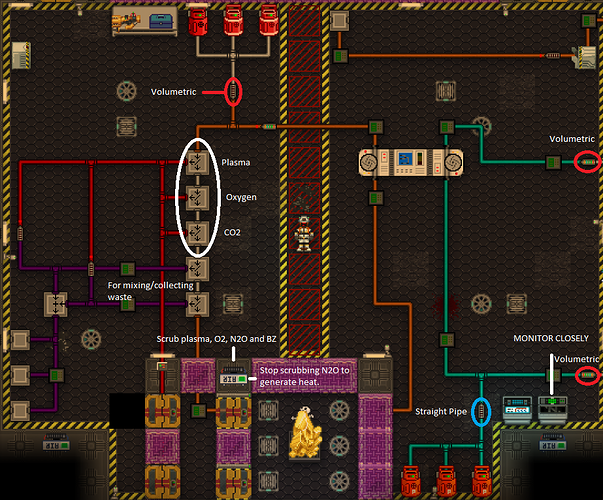 Edited step 5 as you want to, by default, be scrubbing (moving) your N2O as it will heat up and cook off to O2, meaning you’ll need to replace it to maintain a high heat capacity SM. Allowing the N2O to heat up is how you generate energy, but be careful it isn’t left too long to cook.

You called it a discussion so here we go

TEG may be nice but I’m not sure it should be a default setup on low pop map, map that is run when having even a single engineer is not guaranteed, not to mention engineer that may understand and know how to set up completely different beast of an engine
Corg has actually a great setup, pretty sure more and more people will learn how to run TEG alongside SM just because it leaves you an option to easily do that.

But when it comes to Pubby…
I was working on my own take of Pubby SM some time ago.
Had a vision of a control room that would allow you to do some operations without getting out of your seat

Had some positive feedback back then but I’m not sure if its worth finishing up. What are your thoughts?

(+) Emergency Waste Pump
(-) Engineers will abuse it and “WHY DELAM, CHAMBER EMPTY”

(+) Filtering Waste Gases so you’re not cooling waste
(-) Hugbox, engine shouldn’t be optimized to begin with

(+) i am a sucker for pretty wiring

-/+ Atmos → Engine pipe isn’t precooled, meaning you introduce room temp gases to a cold line. Adding a freezer roundstart would be hugbox so this is fine.

It’s a very nice setup but the SM is intimidating to newbie engineers and atmosians as it is, the piping is a little bit harder to understand and follow then your standard SM, and as much as I like the idea of a hugbox engine, the filtering-prior-to-cooling strat is something that is exciting to learn either on your own or via a friend/wiki. This would take the fun out of that learning experience.

I’m also curious how the three consoles would interact with the engine setup. If one of them could remotely control the pumps I think I’d like to see that in action, meaning engineers wouldn’t need to suit up and enter the SM room except to fill the rad collectors and close the blast doors. I definitely like an SM monitoring room like you have it, and I think it’s definitely on the right track.

Just re design pipes with a freezer, connect it to teg and you can get 4,500 MeV without any risks at all. Best thing is, SM is not actually used so no sabotauge or delams

Not sure about abuse of emptying the loop and chamber. You can do the same on any other map just by setting filters to nothing. Personally I would prefer if people would do that instead of RCDing the floor every single time, its less of a ‘magic’ solution

Didn’t give cooling loop that much thought. Its actually the same on Meta. Things can easily got flipped so it all goes through the loop first and only then gets filtered out

I actually prefer having atmos pipe going straight to vents, that was a concious choice. Same is on Delta. If gases you pump will get cooled down anyway and all unwanted gases will get filtered out then you don’t really need to worry about what you are pumping cause nothing can go wrong. Guess that’s my one opportunity to say hugbox and that I actually opted against it
If you really want part of that pipe is going through space as it is currently on Pubby (there’s a bit of a mess on screen, as you see its far from being finished, was focusing of getting engine done, that’s why there’s still a lot missing like disposal pipes, vents and scrubbers to deal with room atmosphere) so you can swap it for cooling loop segment or there’s enough space in control room to place a freezer.
That said, if we were to flip the engine so all waste would be first cooled atmos pipe would end up being connected to ‘hot’ side and pumped gases would get cooled down and filtered

Appreciate that you like the railing. Wanted to create perception of dimensionality with railings, catwalks and stairs.
I was really worried that they will be constantly in a way of engineers but I tested that layout few times, including dealing with delaminations, even setting it up with removing pumps while its already delaming and not ever once railings were a problem.
Although it was tested with just one person in the room, it could change with few engineers running around

The idea for this SM was to build control room for operators, that’s why pipes are laid this way so from one spot you can add gas from atmos, select what you wanted to get filtered into canisters or decide to bypass the filters. I also moved air alarm controlling engine vents and scrubbers to the control room in later version.
But I didn’t want to go too gimmicky, didn’t want to make any special things just for this engine that can’t be replicated by players. That’s why consoles sadly don’t have any special interactions (my inability to code might have had something to do with it as well).
One is an engineering console that allows you to turn either SM monitoring or power monitoring software
Another one is a console currently existing in Pubby engine room-console linked to sensor inside SM chamber that reads out gas parameters. So its basically giving similar informations to SM monitoring software. If anyone has idea for more fitting console I could swap it
Third one is camera console. All cameras in engine room are linked to two networks, basic SS13 and new one created just for that console so engineers can watch every corner of an engine room.

I’m aware of potential unfriendliness of this engine, that’s why I was consulting with people whenever I could to get as much feedback as possible and surprisingly no one so far said that they had issue understanding anything about the layout, and I was specifically asking for that.
If you look at it, its really a regular SM except for that one bump in top-left corner.

Of course, if this was ever finished and merged I would add suitable pictures and descriptions to SM guide on wiki. I am actually thinking of making some changes to that guide anyway after I saw few people delaming the engine while following it. There’s need to clarify description of few steps and I think it would be better to include explanation of how filters, pumps, vents and scrubbers work. Only issue is my poor english, I’m afraid I may make things more confusing with my poor phrasing.