Part of Admin Conduct Broken (if relevant): “Any form of bias in dealing with players is not tolerated, favoritism from players or other staff should not weigh in the decision making process.” “Do not issue a punishment unless you can prove their misconduct through logs” “Maintain a decent standard of professionalism when operating within the community. Insulting, harassing, or intentionally offending anyone in our community is not tolerated.”

I send him a reply of “What?” as this is a gross fucking harassment and insult on my character as I have not once actually erotically roleplayed on this server. I get this as a response.

It is EXTREMELY unbecoming of an admin instead of allowing people to convince something to someone forcing them to shut up because they personally disagree with their opinion about a subject. Admins are supposed to be pillars of the community not bullies who tell people to “Fuck off, degenerate.” to another server because they have a different vision for what the server could be and how the roleplay environment could improve.

Additional Information: I’ve had several bad experiences with some staff members over dumb shit like this because I genuinely have an out-of-the-mold thinking pattern and can back up my opinions with examples and facts where it actually works and helps a server sustain population and where it hasn’t lead to furry fetishism being implemented but because they can’t accept logic that some things work or formulate a retort they have to go “OK retard, stop talking, admin ruling final haha.”

EDIT: I have not once had anyone acknowledge the obvious and blatant violation of the admin conduct, I want a council ruling on this and I want to understand how posting in OOC my thoughts about what is and isn’t ERP could get me banned for ERP, just because someone defends ERP, that doesn’t make them an ERPer nor should they be excluded from the server because of a disagreement with the rules. You wouldn’t ban someone for complaining about the naming rules and conventions so why would you ban someone who thinks that ERP could improve the roleplay environment. All the posts I see here is “LOL GET OUT ERPER” instead of actually reading the nature of the complaint and how it relates to admin conduct, admins are supposed to act professional yet you push that aside and say I deserve it because “bruh erp cringe!!!” It’s honestly disgusting and I have no idea how the people who haven’t added to any significant discussion here got staff, and I know not all staff members are bad, I’ve had legitimate discussion with some on how they think the server could improve with certain rulings and they actually treat me like an equal instead of someone above everybody else. These are the people who deserve exemplification within the server as pillars of the community.

I am sorry I didn’t let you talk about ERP.

I only saw the notice about your ERP shenanigans after the round ended, if I saw it earlier you would have been banned for this. 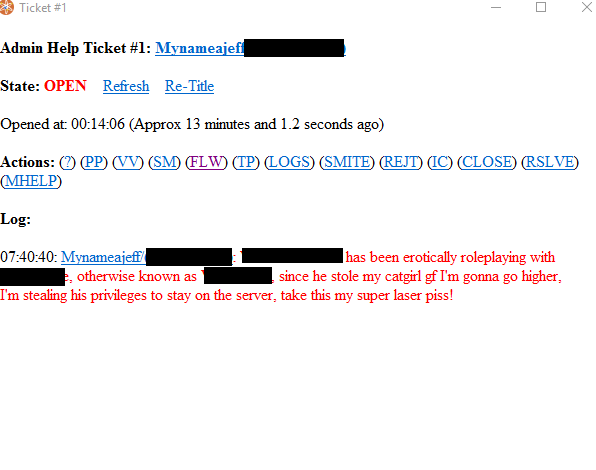 This was your tickets about them, I don’t know what is your problem with ERP and everything has to be about it.
And no, riding on someones back is not ERP

You were discussing ERP on a server with half of the playerbase made out of children. You have also been cought ERPing. What did you expect?

I didn’t ban you. I said I was going to if you continued.

Yeah, but threatening to is just a step so you can ban and act as if it was justified regardless, it’s unbecoming of a staff member and you continue to strawman and beat around the bush, actually acknowledge the admin conduct you broke and admit your faults. 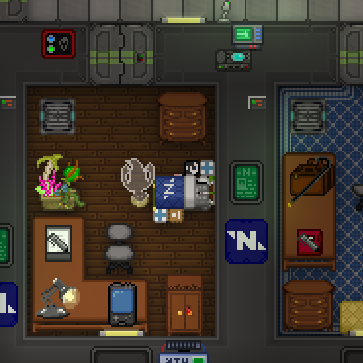 The only incompetence on my part was not seeing the note sooner and not banning for this.

I don’t see any insinuation you’re a furry. I see you being told to “go to a degenerate server if that’s what you want to do”

On MRP? devil happens only on mrp from what I know. And that doesn’t sound mrp-friendly

And you continue to beat around the bush and strawman while trying to take things out of context yet again, for one, that was just dumb fucking bait, I’m clearly not actually fucking vouching for ERP but I like seeing people cringe about it and sperg out when they can’t formulate an actual opinion against it without being consistent. I did the same thing that Velvet Pinkawalt does and even acknowledge IC and OOC that I am a direct copycat of them. You really have some wrong compulsions on your place inside of the community.

I had it confirmed by the admins that I could say this in character to this person, I posted it later and was told not to despite it being OK one round? Whatever, it’s irrelevant and frankly just defamation to say I was ERPing by posting a meme in comms.

I’m talking as in my playtime in general on the server, haha funny ERP bait haha lol!!! Resting on eachother and bwoinking about ERP is bait to get admins like you riled up, you guys can’t defend your beliefs, I could have listless amounts of conversations about why ERP is detrimental to a community beyond “think of the children!” and the greater scope on social constructs in themselves but while intellectually stimulating, that’s not funny! It’s not about the ERP it’s about sending a message.

Ruko, please understand that he said go to another degenerate server, which implies I’m a degenerate, he also responded out of nowhere in a very hostile tone, clearly trying to oust me from the server because he views me as some untermensch undesirable that needs to be fucking purged and erased from the community.

I didn’t say you were a degenerate, I said go to a degerate server if you want to ERP, which is perfectly reasonable from what you were doing.

Are you melting down? Calling a game server degenerate implies that it’s for degenerates, really you can’t understand how that could offend someone? How threatening them with a permanent ban from the game because they have different views than you could be seen as something an admin shouldn’t want to sponsor?

I have never stated my views on ERP in all of this, I have simply stated that the server does not allow for it. I enforce the servers rules not my own, if you have a problem with it talk to the hosts about our lack of ERP

That’s the thing, SS13 is full of graphic content, violence and downright scarring things in different communities across the board. It is by no means a game for someone who is underaged, yet games like Grand Theft Auto despite having strip clubs attract swathes of children and other individuals. This doesn’t stop them getting exposed to ERP in other servers which is an inevitability when looking for variety in SS13. I’m not saying ERP is good but I’m saying that it’s not directly detrimental to the server as a whole.