The 62 years old war Veteran with physical (and mental !) traumas.

Used to do restaurant chef gimmick with them but it doesn’t seem to really work so I just put tables with food on the counter instead. As detective, I like to harass the HoS for the HUD eyepatch and constantly walk to mimick a limp. Tried my hand on warden recently, will most likely try HoS and later, maybe, Captain.

I would love to know if I need to improve anything with my character from what you’ve seen so far, be it in RP or playstyle ! (don’t hesitate and add anything else) 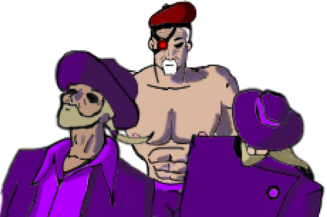 silly paint Henry (in the middle)

I love to create backstories to my characters ! Did you know that he has two brothers?

I appreciate any inputs, thanks for taking your time !

Love to know you’re a roleplayer though! Already makes me a lot more interested in seein’ ya