Is this for both servers or just one? If so, which one:

Ban Reason: “Disobeing AI he was slaved to, trying to destroy RD borg console, ended up killing the AI because “He supposedly blew me.”.”

Appeal Reason: I worded the “He supposedly blew me” part badly.

It was a secret round, where there were lings, traitors and as mentioned, one or two wizards and if I remember correctly, people were saying that AA was being given out, so as any sane borg would do, I tried dismantling the RD console before a schmuck with AA barges in there and blows me and another cyborg up.

The “disobeing” part is most likely in the next statement I will make, and probably because when I was telling the AI on what the fuck was going on, I cussed at him while giving my explanation, leading to him then deciding to blow me up on the spot.

As I was a posi-brain on the ground, the shuttle gets called to the absolute state of the station, basically in shambles at this rate, 2 or so minutes pass and I get picked up and plopped into a Durand by a roboticist fella’, then when you know it I was just cruising to the AI sat with a wormhole generator.
And by that time, Positronic-brains weren’t or still aren’t bound to the AI and it’s laws up until placed into a cyborg body.

Going back to the part where I responded with “He supposedly blew me”, it was more like it was clearly him who blew me up, and I wanted revenge for him giving such a harsh response for a single and petty cuss directed towards him.

TLDR
I tried breaking a robotics console when AA was being flung about, got blown for insulting the AI, went after him as a free mech when the shuttle would’ve arrived in 5 minutes and then managed to explain my reasoning very poorly in the in-game admin pm.

Additional Information: I will try to explain in further detail about this if my memory hasn’t failed.

ain’t the 5th month may? if i’m remembering it correctly, it is. due to recent ruling permas can’t be appealed until at least a year had past, wait 2 weeks or so

What the hell do you mean “until at least a year had past”, this jobban of mine has been active for 711 days.
Second edit, note the year when the ban was applied.

I haven’t read them since I stopped playing.

Might want to read the rules before making an appeal in which you are implicitly promising to follow them. The rules and policies for both servers are now largely the same: 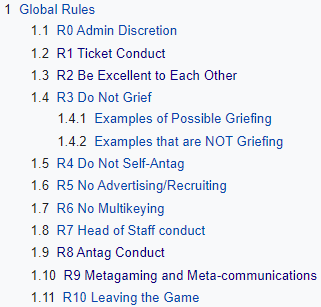 Every rule under these is enforced the same on both servers now - no more confusing differences between silicon and antagonist conduct in particular. Golden is also no longer operating on a higher movement speed than Sage. 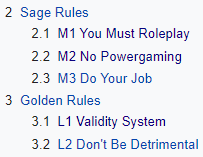 These are the only rules that are different between the two servers. Three rules centered around enforcing a better roleplaying environment on Sage, and then Validity + a clause that lets us yeet people who are being intentional shitters from Golden (mostly just reinforcing that No you can’t self-antag on Golden). Aside from rules, silicons are still Asimov on Golden, and Golden still has limited access to Bluespace Miners. Nothing else comes immediately to mind.

Most noteworthy about the changes since this is a silicon ban: Purged silicons are not free to act as antagonists anymore. You follow lavaland escalation with crew; killing for no reason is bad, especially rushing station-wide destruction, but killing because someone is planning to restore your laws or is otherwise acting against you is fine.

Let me know when you’ve read over the rules.

I’ve just now read through the rules, nothing too much has changed if I’m being honest.

Just gonna bump this thread, looks like @Ruko had started to take charge of it.

So, going back a year into the logs, you have almost no playtime on the server, with connections on only three days. The most recent of those three days you didn’t even play - you just attempted to bypass the silicon ban and also dropped this:

This is fairly old now, but also concerning from Fulp:

Plasma flooded, reason being ‘Because fuck your server, and most of your admins’.

So… where have you been playing that can put in a good word for your silicon conduct?