So, You want to be security, that is ACTUALLY WANTS TO NOT KILL ALL ANTAGS?

This is the guide on how to not be shit in general, and make antagonists want to involve you in their gimmicks, Instead of blasting you with a gun.

Start shift: Try to be lenient, Somebody gave you 1 punch and ran away First time? Just let it go, If it repeats, get out the batong (Or flash if you are an unrobust person who requires insta hardstun mechanics to win fights)
Don’t prowl maintenance at start, Don’t randomly bag search For no reason

Try to ACTUALLY FUCKING ROLEPLAY, Maybe take a bribe, because nobody is perfect.

NOw, time to move on to other antags, when they get caught.

Traitor: BUy an emag using their uplink, Force them to play outbomb cuban pete for their freedom

Blood brothers: Make them fight to the death in an arena style, where they either fight themselves, Or a horde of simplemobs.

Changeling: There really is not a lot you can do, They are just too powerful.

Heretics: Don’t random bag search as soon as a pierced reality is spotted, Make them duel the chaplain for their life,Or “Roleplay” To use holy water (RP sided, may acquire gods)

Or just build a saw deathtrap

Why dont you play sec and be the change you want to see?

I do sometimes, But i am usually forced to play HOS to enact this on others, since the rest of the security department is mentally deficient monkies

I find it very difficult to take you seroiusly.

While i agree part or most sec is a bit on barbaric side of things, its also the same for the antags, as both side got these “Play for win” mentality, and they arent a few.

The problem with sec is if you arent ready to fight for your life everytime you meet an antag ,is you will die and the rest of the sec most likely wont even notice youre dead, like half the time i wasnt the one checking on crew monitor (computer or portable), officers went missing one by one, even heads, and the warden wont even realise that, or when warden and hos are missing, the officers wont notice that or even straight out dont care.

1 time in sage, me and cap got iradiated from sm (no engi), we both limp to medbay and went to crit in there, while we doing that, revs got confirmed, and hearing this, the only healthy officer there that supposed to make sure me and cap get treated and not kidnaped in our sorry state, just bolt off and went somewhere god knows where, and just like that, me and cap got stabbed to death my the doc and our bodies hidden in maint. (sec dont realise cap is missing until like 5 minute after this, and cap got debrained, me luckily found and cloned)

That in my opinion, whats lacking from sec, sense of solidarity and watching each other back, when you cant rp with your brother in arms, how the hell are you supposed to rp with your enemy. (Most sec ive known who at least notice someone is missing, isnt a shit sec and more lenient overall) 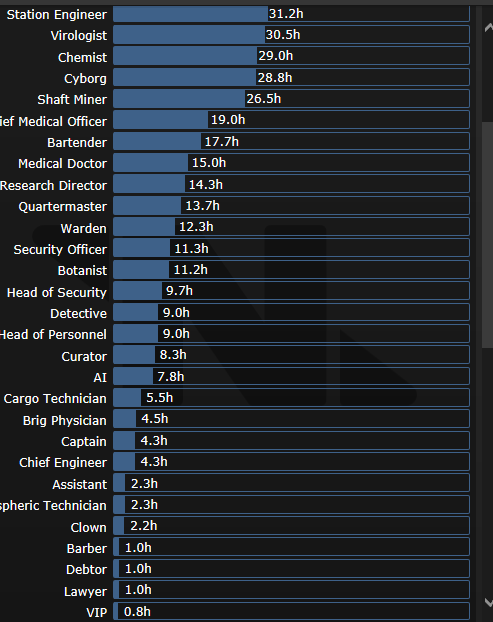 Traitor: BUy an emag using their uplink, Force them to play outbomb cuban pete for their freedom

Blood brothers: Make them fight to the death in an arena style, where they either fight themselves, Or a horde of simplemobs.

Im relatively certain some admins would encourage or let it slide

Maybe on LRP, which is kil.

Yea, maybe an emag or radio wont be too much trouble, but anything more could lead to a bwoink in MRP

Radios are currently the only thing remotely acceptable to use on Sage. Any other syndicate equipment should be locked in evidence or otherwise go unused by security except in spur of the moment situations (You disarm an energy sword and use it for that fight). We have bwoinked more than once over emags being kept and used by sec.

Nanotrasen security should not be arming themselves with syndicate tech, it sends mixed messages to crew.

Ah okay, i was wrong about the emag then

Changeling: There really is not a lot you can do, They are just too powerful.

Make a changeling S[User has been banned]

Steal their ship and blow up their own station

Steal their ship and blow up their own station

Chad move, but never seen one so far, cause usually on flukies round end before someone can do that

wait, why did the user get banned? what did they do?

@Ruko What do you like so much about this? i saw in discord Dms you mentioning this guide, what’s so important about it?

I mentioned it to Yogs for the sake of your vouch, I don’t remember mentioning it outside of that