HoP needs punishment for not opening jobs, especially on Highpop

Let’s say there was only one engineer, who was the Chief Engineer, and the only thing he did was a very basic SM setup and literally nothing else. When people called for an engineer to fix the bombed medbay, he did nothing. He didn’t set up solars or the turbine, even after the SM delammed. People were out of power, and the round suffered because of it. Obviously he would be punished, right?

So why then can the HoP get by with ONLY doing the ID stuff, and ONLY for the first 5-10 minutes of the round? HoP has the extremely important job of opening slots so people don’t greytide, but at least half the time he either does fuck all, or JUST does the ID stuff, and for not very long. But he gets no punishment. Imagine if the HoS only arrested people, and didn’t let them out, or the CMO’s solution to harm was to stuff them in a cryo and call it a day? Every other head role gets punished for not understanding or trying to fulfill ALL of their responsibilities. Opening Job Slots is literally only 1 of 2 (3 if you count petting Ian) things you actually are supposed to as HoP and it has a huge impact on the round.

I mean how many times have you seen a situation where one of a job went SSD roundstart and the other guy got killed at some point? HoP is supposed to fix that, but he never does. That needs to change.

While I agree that HoPs should start caring more about jobs, you know that 1 engie roundstart means there are 4 other slots to be taken, so HoP can’t really do anything about it. And generally there is a set amount of slots round start, if they are not taken then it shows up to joining players, HoP can mark some jobs as important so people take them, but nothing is guaranteed.

Edit: Also HoP can’t really know how many engineers are doing their jobs, they can get it from heads, if noone is saying that they need more manpower then why bother?

Since HoP is the only one who can do the HoP job, I was using the CE example as a situation where there was only one person who could do the CE job, and how the CE would be punished for failing to do so.
The point is that HoP needs to open more slots because it’s just as important as setting up backup power, and that any other head would be punished for only doing half of their responsibilities at a mediocre level.

Yeah but 99% of the time when someone tells HoP to open slots is to open miner, then chap if cult. No head tells them to open job slots in their department and HoP can’t really know which department needs most manpower because, well, he shouldn’t have access to these departments.

I’m talking about when all the slots are filled, (except maybe mime or something) and there are 5 assistants, and anyone who joins is forced to be assistant, which encourages greytide. HoP should make sure there are open slots for the majority of jobs on the station so that people can actually play the game.

But it’s still rare you know, given the pop cap and that people use cryo quite often.

you realize there are less slots than the pop cap, right? And what if multiple people want to play chef?

How would people in the lobby tell the HOP? It might be IC OCC if you do it through OOC on lrp, and I can’t think of any other way other than that

same way you always do it.

besides, since this is a rule change anyway, you could just make it so that ick ock about job slots isn’t a problem. Very low impact on the round, and you’re not supposed to metagrudge anyway, so if I say “hey hop all the jannie jobs are full” (not going to because as it stands it’s ick ock) and then 5 minutes later “Collin Wachowski has signed up as janitor” there should be no problem. OCK ICK about “Damnit, the hop didn’t open any jobs so now I have to be assistant” isn’t a problem, even on mrp *afaik so why would it be a problem on the inverse?

This is why I for a long time have wished the HoP was split into two different jobs.

1: The Commander role. Which is the true 2nd in command to the Captain.

2: The Human Relations manager. Who handles both IDs and any non-criminal disputes and complaints.

If we divided this role into two this would make both roles so much more efficient no longer do you have HoP’s wandering the station for good reasons or not. If the Commander was the AA having officer they can do whatever duty that is needed away from bridge. While the HR department doesn’t have AA (and if they give themselves it, it is considered a serious crime and violation of trust in IC) If they like the current HoP simply wander off and don’t do one of their main functions they can simply be demoted and replaced. The HR also shouldn’t be considered a head.

This is why I for a long time have wished the HoP was split into two different jobs.

1: The Commander role. Which is the true 2nd in command to the Captain.

2: The Human Relations manager. Who handles both IDs and any non-criminal disputes and complaints.

I like everything about this save for the HR not being a head, HR makes a lot of sense being a head for the Service staff, just make the Commander a regular second in command position. This should be taken to a vote however. Also I forgot to set this under suggestions, whoops lol

Adding another head creates a issue where winning certain rounds like Rev rounds get harder. Plus as them not as a head their access around the station would be far more limited. The less places they can wander off to the better.

Ehhhhh. What would the commander do, though?

The commander would do all of the duties the HoP normally would except handing out clearance levels and IDs. They would play vital roles in many ways. From being the most direct and trusted advisor to the Captain. As well as be the next in line through rank should something happen to the Captain.

They can also play roles typically expected of the current HoP such as being a part in the process f the courts.

If an inspection of a department needs to be done to see if the department head is living up to expectations the commander should be sent rather than the Captain.

The Commander shouldn’t leave the Captain’s side unless there is a rational IC reason for them. Working not only as a 2nd in command but also a bodyguard of sorts to the Captain. After all, why should the right-hand man run around like a chicken with his head cut off around the station as we see so often with the HoP?

In the rare event of an away team being needed the Commander should be the crew to lead the expedition.

To ensure the orders of the Captain are being upheld through inspections.

Give well-meaning advice to the Captain and work as a second opinion that should be considered.

Did I mention have a beard and be handsome? 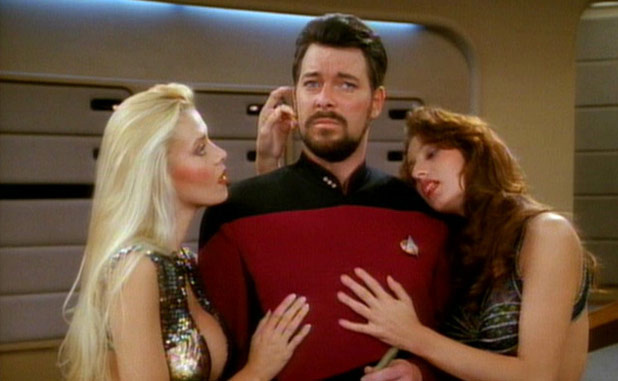 So he would be trying his hardest to avoid doing his job?

BREAKING NEWS: The Head Competence rule isn’t enforced on Sage. Despite it being in the RAW.