Comrades, remember what we are here for- the putingulo.

Russian nukies, in short terms. They have shittier equipment that costs less, will automatically be announced, and must complete a different, harder goal. They have to assemble the putingulo generator, and claim the station in the name of the Fourth Soviet Union!

Of course, ideas are welcome to improve both of these… not-so-fine ideas. I’ll also have to assemble a fine schedule, because I like being busy with SS13 crap. So, release date is when the Germans make it to Moscow.

Does the Bearaxe Conversion Toxin, mean that… We’ll get some…MEATY, BASED, RUSSIAN COMBAT BEARS?!! 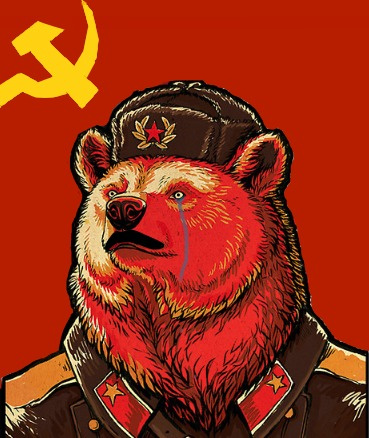 The Motherland approves of this!!

Security gasmask-like racial ability that (on a short cooldown) lets them scream out a proganda slogan.

I think russians should have shitty surplus equipment that is cheap that they can just hand over to people to try to distabalise the station.

Security gasmask-like racial ability that (on a short cooldown) lets them scream out a proganda slogan.

Aspects of Hive Reclamation include:

The tank must run on Vodka, and Ruskies should heal from drinking it.

The racial ability should give a small, stacking bonus to speed/health/damage resist to fellow Ruskies.

In place of borgs Ruskies should be able to buy the Communist golems already in the code, that deplete nutrition with punches and turn anyone starving into a new commie golem. Their punches should also heal Ruskies and comrad golems.

Ruskies could also buy additional “soldiers” with armor, but no weapons, who follow their purchaser in an conga line. When you die, you immediately take control of the next soldier in line.