As CE, rushed an injector into SM in order to cause a singulo delam. Player was not an antag at round end report.

On round 10815, attempted this again. Suspect this is CKEY Nutskeet because he ICK OCK’d to kill me after I stopped him. 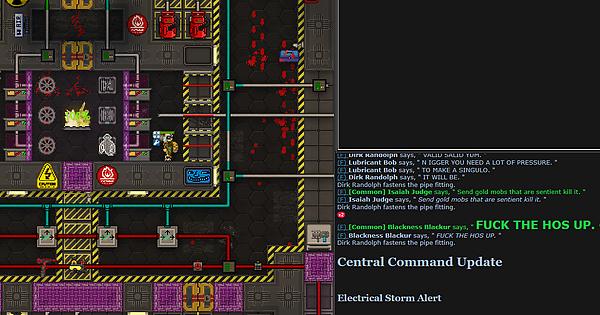 I remember someone named dirk, he borged me and called me shitstain, after 10 mins of asking him to change he did to shitstain v2

WELL to his badluck I was fucking malf with bunch of syndicate laws but I was trying to be kind, i dismembered his body into tiny pieces as he was laughing that i cant hurt him, he realized he is fucked when he saw his own legs on the floor then i cut off his head, put It in my bag, placed inside metal box and hid on solars.

holy shit he got karma’d so damn hard.

anyways I think I remember a dirk guy who downloaded me as pai, turned off my holoemittrrs, and spaced me for no reason.

Anyone who abuses pais are the lowest scum on the station