Devils is a gamemode so long removed that many likely may not even remember when it was a normal part of MRP. To those of you who do, it’s safe to say that the antagonist had one significant problem that ruined it in its entirety:

Devil in its very conception is next to impossible to have as a round-start antag without either being too disruptive, non-impactful or just unfun. So what can be done?

Your Goal as a Devil

Putting emphasis into the Deal with the Devil aspect by making the role into a Support Midround would fit Devil perfectly, and I would be more than thrilled to see someone much smarter than me put the idea into code. In any case, always happy to put out some weird ideas to expand such an interesting game.

Don’t. The sheer amount of shittery that goes on in Devil rounds isn’t conducive to roleplay.

Generally, the sorts of people who are inclined to accept Contracts with an antagonist are the type to abuse their AA/CQC/magic powers. I legitimately cannot think of a reason you would accept a deal like that if you weren’t an antag or if you wanted to powergame.

Nobody likes it when the clown starts tossing around his infinite supply of nonlethal stun packets except the clown.

It’s not even trying to be balanced to give people All-Access, or Close-Quarters Combat, or the ability to purchase Time Stop from a wizard book, no matter what the drawbacks are.

Can you even imagine how unfun it would be to try and fight a traitor with Time-stop and a desword?

I absolutely love this idea! This is what I imagine your devil’s office to look like. 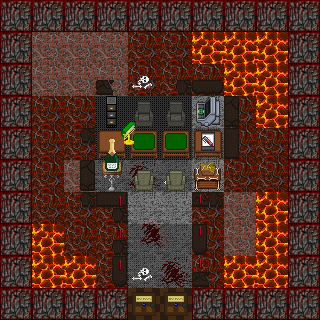 Wizard spells are intentionally overpowered because they’re designed for murderboning. One wizard against the entire crew.

Fireball is an explosive one-hit knockdown that does massive damage, blinds people, and sets them on fire.

Rodform destroys everything in front of you, allows you to escape stuns, and serves as basically AA.

Even Magic Missile is designed to take out multiple people quickly and easily.

CQC is the equivalent of an esword in terms of damage output, and has one-hit stuns in the form of aggressive grabs. All you need is one grab to start a combo chain that kills your opponent.

There’s a reason these aren’t available to traitors and changelings, because they allow you to easily become a one-man murderbone army.

You could rework those to make them way less stronger, like making CQC sleeping carp.

Do not forget that the devil especially does not want to just give some random assistant with a gas mask CQC, because he will absolutely not die and actually make him nigh immortal.

However, devil could see antag with martyr, contact him “hey, dude, i’ll give you a wizard book with 2 points. go wild my bro”

Do not forget that 2 wizard points is not that powerful, by the way. You can only get robeless spells, since, you don’t have a robe.

do not forget also, that the incentive to green will mostly mean devil will be the defacto “antag empowerer” of the round.

There should be a way to counter him passing with the curator; and a warning that it is taking place the second he offers his first contract.

Maybe after discussing with someone, if the curator learns the devil name, he can start creating a portal or something of the sort to let one person go through against the devil’s will. Or manipulate the devil with info from the codex gygax on weak pints.

Also, maybe not everyone is comfortable roleplaying with Satan. Not everyone who plays SS13 is an athiest.

Speaking from extensive experience on the combat side of SS13, fighting an invisible antagonist that empowers your enemies and being forced to rely on a curator role to fight him that half the time either doesn’t exist, is a newbie, or is running around in outer space is bloody infuriating.

The gamemodes are already largely well-balanced and enjoyable.

I don’t want to have to deal with multiple Fireball-spamming antags stomping all over Security and anyone who gets in their way. It’s annoying as hell.

Keep magic to Wizard rounds. Magic is all either funny gimmicks, easy escape options, or tools of mass destruction. It’s designed for a solo antagonist, and introducing several of them to a round with pre-existing antags will easily upset the balance.

Ok but what the fuck does atheist comment supposed to mean? Its a game mode idea not a religious statement. Like what?

Love the idea of the office and teleporting victims to it, also the mixing with other antagonists. Brilliant ideas.

i mean, yeah, sure, just remove the magic part.

Once again, don’t forget the goal of the devil would be to get them killed. Their best bet would be to take someone they see being unrobust as fuck and offer them whatever bullshit would be most dangerous for them.

If anything, the idea should be reworked to have major drawbacks :
“You get CQC but you move at walk speed constantly”
“You can have 2 wizard points but you change into a gorilla in twenty minutes”

etc, etc. You could even randomize said drawbacks, so that only the devil would know what the drawback for a specific powerup would be - preventing metagaming and antags going “Mhhhhm, cqc seems mighty fine for me right now” because they would not know if the drawback would fuck them over.

This would produce good RP between the devil & the offered person, as they will never know whether the devil is lying and offering the worst possible drawback, or genuinely trying to help because he was convinced you would die no matter what he gave you.

Also, if it bothers you to RP with satan as an omega christian (which makes no sense because here the devil is represented as greedy, immoral, lying and manipulative in order to steal your soul) , you can just uncheck the devil role & refuse to take the contracts

and a warning that it is taking place the second he offers his first contract.

Our sensors detect that one of the souls on the station has transcended past our systems and passed into unknown territories. Officials do not advise interacting with anything outside outside our realm as stated in your contracts

Seems like a great idea. But I feel that giving someone two wizard points is WAY too powerful even if it’d have mayor drawbacks. Why not just give them a spell from a pool of “Safe” spells instead? (Knock, Instant Recall. etc) You could even make it so that antagonists ARE able to get the more harmful spells.

I already dislike being kidnapped by abductors to get brain trauma, I don’t want to get abducted by some fuck roleplaying as the anti-christ.

Edit: Oh wait. I just read through it again and realized you don’t have to pick up the contract.

I thought it was going to be like clock-cult or abductors, where they flat-out kidnap you and ruin your round.

Yeah, alright. So long as its balanced and I don’t have to deal with random shitters with magic powers and tall naked red horned man running down the halls spamming explosion everywhere again like back in 2019.

If I never have to interact with the bad man except to murderize him, I can probs deal with that.

LMAO Devil isn’t Christianity exclusive, I know a revalation for you. he also said devils would look like humans not red horned men, you WILL have to deal with people that have power, that’s devils entire deal purpose, to give someone so much power that he will be lynched and killed, giving him a soul to eat.

Merge Wizard and Devil, have a contract kit available to the wizard so they can optionally be a devil

I don’t see how this solves the devil issues.

The fact that it interacts with the main antagonists as a mid-round antagonist itself makes it augment the round instead of the whole round just being chaos. They also can only have a limited number of contracts to limit the impact.

Though I couldn’t possibly help with balancing contracts, I think Devil could be a more interesting mid-round addition if they were better oriented as someone who influences events, rather than directly intervening. I would say you restrict devils to only being able to talk, offer contracts and teleport around the station at will. They are unable influence physical reality (pick up items, use items/machines, attack people, etc.) but nor are they influenced by it (being immune to attacks, stuns, atmospheric conditions, etc.) only being made vulnerable when the required rituals are perfomed. The role of the devil stays mostly the same: give out contracts, then ensure their clients die. However, outside of offering contracts, which would be limited as per the OP’s idea, they can only influence the world through talking.

This is a pretty radical idea (and I’m also really tired while writing this, so this could be totally incoherent), but Devil could become a really interesting RP-focused mid-round ‘antagonist’. These changes could result in Devil being really boring, or not changing any of the main problems to begin with, but it could give the role a very unique place in affecting rounds. For example, as a devil you can track down an antagonist and offer them a contract, once they accept (and become a target), you have a few interesting options:-

Though you could do this within the boundaries of either old devil or this new revision, giving the devil immunity to normal means of harm, but limiting them to social interaction would force the devil into having to execute their plans in this way, while also preventing them from being validhunted or attacked the moment they appear. This would (hopefully) drive up the devil’s uniqueness and roleplay opportunities, while hopefully reducing shittery on either end of the exchange.

P.S I’ll read over this again tomorrow to see if any of this makes sense, but feel free to criticise away.

If duplicated, does it mean we have two PDAs and we’ll easily notice there are two of them in the message list? or sending a message to them will be split into two PDAs?

I think there are too many antags on sage already.