Can you make power without a smes?

I was playing on a private server and hoocked up a generator to an APC and I also turned it into a room. The APC did something, but wasn’t charging. Do I need a smes hooked up? If so, how?

What I did was add an APC, added a power terminal thingy, then connected a generator straight to a wire coming out of that terminal.
The APC was not charging for some reason, is it a single direction current?

Is there a loose end to the wire under the generator or does it just keep going past the other side of it?

Loose end. There’s a bulb on it.

Time for the tech level 1 questions:

Did you make sure the generator was turned on?
Did your generator have fuel?
Were your wires leading to anything else?
Was your APC placed within an enclosed space? (something the game would identify as a room)

It was turned on and had plasma as fuel.

APC was not placed in an enclosed space as the doors were open, but beforehand I had made it a room.
I did have wires leading from the apc terminal to a chemmaster too, but so was the pacman from another side.

The generator did aomehow react with the APC. Normally you got 2 lines of text in an APC. The first one saying if it’s charging or not, the second one I forgot. The second one was being turned on, but the APC wasn’t charging.

Edit: I think I forgot to attach a powercell to it.
I did, however, try attaching a chemmaster directly to a generator without an APC. Does that not work?

Edit: I think I forgot to attach a powercell to it.
I did, however, try attaching a chemmaster directly to a generator without an APC. Does that not work?

While I’ve never tried, I’m pretty sure an APC is required to power most things that are capable of being powered by one.

I think I forgot to attach a powercell to it.

This would definitely prevent your APC from charging

Alright, thank you! I’m away for a couple of days from my PC, but as soon as I’m back I will test it some more.

I don’t really know what I did wrong here. I just directly hooked up a power cell to a PACMAN that is delivering power, but the cell charger still flashes red when I want to put a cell in.

Cell chargers draw from APCs, like most equipment that requires power does

So an APC is required, thanks!

Yeah, there are not a lot of things you can hook directly to an open ended wire.

SMES are used for storing power and regulating output. You can directly hotwire the production to the apc, but if you’re producing god levels of energy, the next door you’ll get shocked by open leads directly to hell^3. 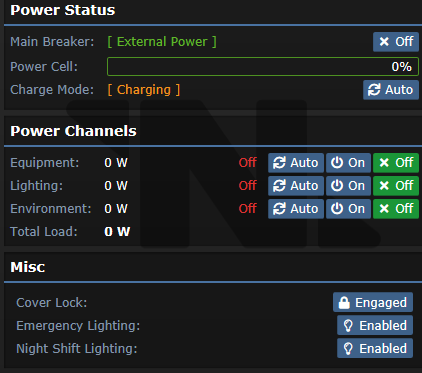 So I’ve connected a PACMAN to an APC with a bluespace battery. It says it’s charging, but it has burnt through more than an entire sheet of plasma while the generator is spewing out 40KW 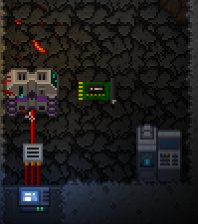 EDIT: I found out I needed to turn on the main breaker, so it’s fine now! Thanks