CKEY:
Bo66y
Admin’s CKEY:
Ro5490
Ban Type:
Temporary Ban
Ban Length:
5 days
Ban Date (YYYY/MM/DD/):
2023-01-12 01:25:06
Round ID:
42214
Ban Reason:
NRP / Validhunting R2
Appeal Reason:
Despite not attempting roleplay with the Nightmare, my behavior was indicative of a 5 day ban and I believe valid following the rules.
Additional Information:
So as stated, I found a nightmare no the edge of maints just below my department as I was RD. Once spotted they ran off into the maintenance, and I called a security officer over to come help. Once they arrived I don’t quite remember if I am honest but I said come on I know where it is, If I didn’t my mistake but the security officer did start following me. The reason I went was because;

Once I found the Nightmare as I heard it actively breaking something, It was an APC near science I don’t remember which one I think it was right below the R&D room, it was standing right there and i had the security officer behind me.

The reason I shot is that I have always looked at the escalation policy when it comes to dealing with antagonists and on top of saying I have to keep my department safe and secure and he is actively breaking it, the nightmare is already declared as hostile for the station. Personally I like to roleplay with antagonists but I wouldn’t talk to a nukie while he is about to ice me. The Nightmare in this situation is doing something actively damaging to my department, and yes the PTSD is for self defense but I suppose it was a defensive move, and I knew I had backup.

Admittedly I didn’t expect to completely kill the Nightmare with it, I didn’t realize it was that squishy and the PTSD would kill it, I have always found it to be quick lacking but I don’t think I broke rules to attack it, and If I did it would of been managed with a warning or something rather than a full 5 day ban.

Even if not an accepted appeal I would request just a bit of information on how I could of done this better to prevent it happening in the future.

You acknowledged seeing the Nightmare listed as hostile in the escalation page, but may have missed this bit of text regarding what hostile means:

Additionally these from the same page are especially relevant when dealing with Nightmares:

Pursuit: If you pursue someone that is attempting to escape a conflict, even if they are the aggressor, you become the aggressor and may no longer escalate. Use reasonable self-defense, but once your attacker is repelled it is no longer self-defense. The captain and identifiable members of security are never classified as aggressors by this clause - it is their literal job to protect the station even if the perpetrator flees the scene.

Guerilla: If you retreat only to attack again immediately (within five minutes), you are the aggressor of a fight even if you attempt to retreat again and are pursued as described above. Don’t try to be a little shit and expect a fair fight.

Even if not an accepted appeal I would request just a bit of information on how I could of done this better to prevent it happening in the future.

You are armed and trained to use firearms as a head of staff, which is why you’re supplied with one, but are expected to use it only defensively rather than aggressively. It is meant to deter threats away from you and your subordinates, not meant to pursue threats when they try to disengage in an effort to completely remove them.

Pursuit of a threat after they have been successfully repelled from your space makes you the aggressor in a confrontation, which is what should ultimately be left to security when it comes to finishing off threats that are fleeing. Maintenance tunnels are not part of Research and development, and your subordinates weren’t present in them at the time it sounds like.

NRP/Validhunting(R2) - as RD, saw a nightmare in maints, then chased them down and killed them with a PTSD without any RP while there where multiple living security officers, including one nearby. Heads of staff should not be chasing down antags when theres an active security force aboard station. The PTSD is for self defence, not to go chasing antags with. -This is a result of a player report against you - Unknown Ckey validhunting RD, round 42204

Essentially what ruko said above.

Also, from the Rule 2 section you pulled

While its understandable to defend your department, chasing a nightmare deeper into maints from the main hallways isnt great, The nightmare was not in your department at the start of the chase, and only entered science maints due to you chasing it.

Yet you fired twice at the nightmare before saying anything regarding it, causing it to run off into maints, and only then did you call that it was “by R&D room”. 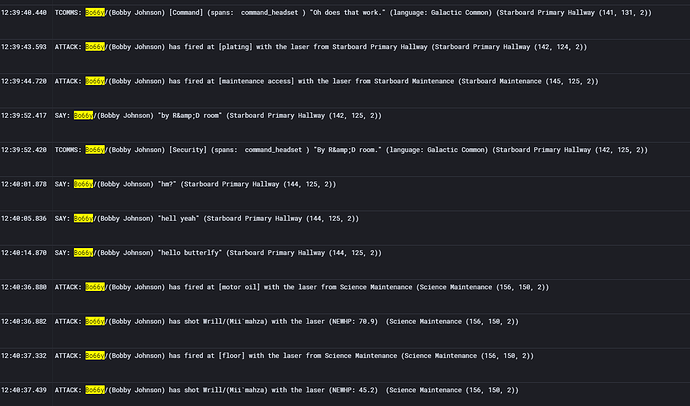 A short ban for NRP and Validhunting in this case is ideal.

In the future, please try to let security handle situations, if you see a nightmare then inform security, but dont go shooting at it and chasing it if its not already in your department please.

I appreciate all the replies and the explanation.

Personally I thought 5 days for a first offense was quite harsh but I suppose its a good deterrent from doing it again, despite that I appreciate the explanation.

Will take this into account in the future, thank you.

Thanks for being so understanding

Ban has been shortened as you seem to understand the issue in question and have been very co-operative in the appeal process alongside asking how you can do better in the future.
Appeal Accepted
Ban expires on 2023-01-15 @ 01:25:06.