Rules Broken: Do not self antag

Incident Description: Genetecist was going around hiding bodies after they were husked, going out of his way to put them in a locker and hide the locker. I believe he also was shooting people with a syringe gun causing traumas and other problems all round. I was the borg this round on efficieny lawset and tried multiple times to get him to leave medical so they could work but he would not and was actively taking bodies away.

Additional Information: I also watched him shoot Aethria Mediana witha syringe gun multiple times as a ghost, igniting him as soon as it hit him.

I was Aethria Mediana, and I can say i was very annoyed by their behavior, they shot me with a syringe gun, twice, which set me on fire, then proceeded to trash talk me, even into dead chat, and then OOC chat. He was not any type of antagonist, and he seemed genuinely proud of what he was doing, which was ruining multiple peoples rounds and being a general nuisance.

Sounds a little like grecklerapperincendiary from round 40645, could be wrong though. He was doing the same a few rounds prior to his banning

His post-round OOC messages are also rather… trolly. 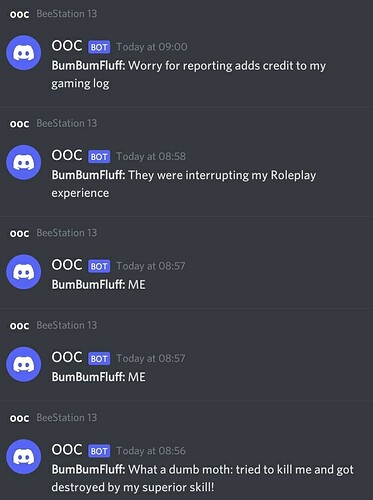 Yeah, this checks out. Made phlog, napalm and clf3 in a syringe gun and shot people with it, along with stripping someone who was SSD and injecting them with random mutations. That along with the comments in OOC and low hours makes this a likely grief account.

Thank you for the report, processed.