Is this for both servers or just one? If so, which one: Global Ban.

Ban Reason: Banned for Chainshoving an assistant; called it ban baiting after they critted me and trapped me in a corner, I can provide an image of the full ban reason, can’t embed.

Appeal Reason: Chainshoving an assistant after they literally critted me is a viable reason for revenge, about the vouch also; I’m currently an admin on a Major Server; I’m wanting to come back to play with one of my friends. Aware I have been banned many times.

@sergeikoralev 2 days i know ur busy tho

Hmm just hope this isnt the case for you, but

Sustained permanent bans may no longer be appealed until at least 1 year has passed, and not without vouch.

"Permanent until explanation" bans remain the same as before, forcing an explanation on the forums before being processed as a normal ban rather than a truly permanent one

I have to come back with a voucher, that’s my case.

Yea bro but unless your vouch is making you look like a saint or admin makes an exception, you have to wait mandatory one year. As far as i know.

I mean its almost been over a year.

It’s only been not even 9 months,

This ban wasn’t even from Sergei or superdork?

I’ll ping a headmin with this next time I see one on since they are supposed to process these types of bans. But unless this ban was a mistake you’re not getting unbanned.

Since you asked me to review this… let me get down to the basics. 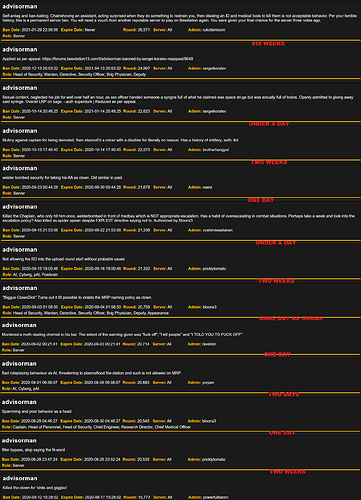 You’ve shown no interest in improving your behavior over the 8 months you were permitted to play on the server. You average a note every seven hours that you are on our servers. If I were a headmin my question is this.

“Why on god’s green earth should I make the administrative staff put up with your bullshit?”

There’s also no way in Sam’s hell nor Dante’s nine rings that you’d ever be reasonably allowed to vouch for yourself. As an administrator I would have thought you might understand at least that.

Can always get the host to vouch for me; I get it really; you probably are questioning yourself on why you should let me come back into the community. I’d at least figure I’d have one last try since my last ban on the server was biased and got accused of Ban-Baiting, I just wanted them to get talked to about it, seriously.

I honestly can’t get rid of the /tg/ feel Beestation gave me; really was my starter and I don’t wanna go back to the ACTUAL /tg/station server, I got bored of everything quickly and I just want to retry here; nothing’s stopping me from doing it either, I just miss the server in general and I want to come back and play since I don’t want to be halted from it forever, I’m tamer than I used to be and pretty much enjoy everything that’s passive.

Shouldn’t have to warrant a permaban; even though I am aware of the stuff I did on here, I admit to chainshoving the assistant since I wasn’t having the brightest of days, I get it, you don’t want me to come back to the server and I really can’t blame you on that matter; but at least I took the time to appeal and put some actual effort into this; we can get the actual banning admin involved if you’d like so they could have the actual say in this.

That’s pretty everything I have to say in this situation; I just want to reattempt at it even though I did some Niche things in the past.

If you feel that the appeal is over; you could always just end it here and I won’t make another appeal to come back.

we can get the actual banning admin involved if you’d like so they could have the actual say in this.

Your permanent ban was from an admin that has since retired, so that’s not really an option.

Perma bans like this are handled by headmins. One of them will get to it eventually.

I’ll wait then! Short and simple.

I personally don’t know foundation 19, so whether we accept there vouch or not is something we have to debate about internally.

most if not all your bans are as a result of being tider or not doing your job. Most likely this ban escelated from something minor to a perma purely because of the sheer amount of times it has happened.

I also am curious why you named 2 different admins that supposedly banned you when it was infact neither.

Well regardless, 12 months are not yet up. You may re-try in january

Closing this for now