What game modes do you dislike?

General
Ruko August 12, 2021, 5:49am #1
Vote for the game mode itself, not just whether or not you like being this antagonist type.

And why do you dislike them?

Personally, the two I voted for were Extended and Heretics.

Extended has two main problems. The first being that TG was largely built around there being antags, and the second is that departments like Med and Sec have (usually) very little to do. Extended currently has a weight of 7 in the gamemode selection, just below traitor and just above blood cult. (posting the full weighting at the bottom for reference). I think extended could be bumped down to 5 or even 4 and I’d be happy.

Heretics, I dislike both being them and fighting against them. When you are a Heretic, it feels too murder-y, and having to pull off 5-6+ kills in a round makes the kills themselves rushed and not well planned, and leaves a lot to go wrong. Additionally, the pierced realities immediately give away that there are heretics, and puts sec on validhunt mode. When playing against heretics, if you’re killed by one, it gibs you, meaning it’s likely a permanent round removal with very little chance of being found or recovered in any way.

Blood Brother is my least favorite antagonist in the game at the moment - considering that you have too work with some random you don’t know, you get no tools or assistance to accomplish this, and your success is tied to them not making some critical error that, in a game with so many random fail state variables, is entirely possible.

Unlike with traitor, you can’t blame your mistakes on yourself or on just bad luck; it can also be because somebody else is dumb, and not that they caught you, but that they blundered in too Security. It also bypasses antag preferences to my knowledge, which makes it even more cringe, and if your blood brother is a traitor target then you are basically fucked and 100% going to lose. They don’t tend to really interact with the crew either, and it ultimately feels like an Extended round since they effectively have nothing but station gear and looking after two people is harder than one, meaning they have less incentive to do much but stealth.

Heretics was removed from rotation but just boils down to murdering a bunch of people with subpar or on-par equipment. You have to go stealth completely until you ascend and then upon ascension you murderbone, you have no real possibility of parole or other surgeries that allow you too return to the round except for cyborgification, and the one person who is immune to Heretics can BE a heretic - namely, the Chaplain.

Extended I don’t mind on occasion, but there is one major issue - every good story requires a villain. Extended removes external conflict and requires solely internal conflict, and personally I do not believe that /tg/ codebases are designed around this. Its just a slow mounting of issues and nothing really occurs except for the occasional meteor storm that either does nothing or requires evacuation, or some murderboning pyroclastic slime. Its maybe enjoyable every once in a while, but VERY quickly gets boring if there aren’t specific people who are likely to roleplay actively on.

While I could come up with reasons for disliking every antagonist, I feel these are the few antagonist or gamemode types where the bad side outweighs the good.

Clockwork cult. In 5 months playing here I have not seen a round where they failed. In my own personal opinion, they are too strong. That is what I think.

It also bypasses antag preferences to my knowledge

All antagonists do this actually.

If there aren’t enough players with a specific antag enabled, it takes random players with it disabled to fill the role.

So many people have blood brother disabled this just happens to be a frequent occurrence.

Internal affairs is just a reskinned traitor, removes most the enjoyment of traitor, and you can’t do gimmicks because another traitor will murder you instead of actually attempting to enhance the round.

Heretics aren’t stealth antagonists, yet their progression based design kind off forces them into that, and it’s easy to act off meta-info due to the pierced realities.

Revolution is a cool gamemode which lets people greytide, however, heads of staff hiding is what stops it from being good

how to make BB Great again: Make it like a matchmaking system, you get paired with players who have similar amount of playtime with you, and drastically increase the amount of days needed to unlock it

Wizard is only good looking at the dead chat making the dead sea look like a sweet treat.

Dynamic is my favourite gamemode, mostly because its not “Haha you didn’t join roundstart, no antag for you lol” And it spices up rounds without admins spawning antagonists

Extended is just awful, the only place it could work is on goon, where there are secrets, ruins and other treats to keep you company.

Clockwork cult is a little bit of a bore. If they know what they are doing then the round very quickly boils down to (30 minutes nothing) >> (announcement) >> (gearup) >> (final tower defence battle) >> end.

From the top, then.

Traitor: Bog standard, How can you go wrong?

Blood Brothers: Generates a frankly unreasonable amout of antags due to bad programming, and even then it’s essentially just hardmode traitor with a handicap of dragging along a lead weight.

Changeling: It’d be neat with changes.

IAA: Generates an INCREDIBLY unreasonable amount of antags… And then tells them to kill each other. A massive waste of everyone’s time.

Nuke: Generic action. Not bad, Not great. Could use some changes.

Rev: Fuck off. Replace with SpeedyRev by default when?

BloodCult: No incarnation of this has ever been better than wordcult. And even that sucked.

ClockCult: No incarnation of this has ever been better than the first. Even that was middling at best.

Wizard: Let’s make an antag entirely designed around being fun for exactly one person.

Extended: Fine. The game’s design isn’t meant for it but that’s TG’s fault.

Dynamic at the moment is functionally just heretic or wizard due to terrible spawn weighting.

Why is dynamic a bad gamemode because of external factors yet extended isn’t?

Dynamic would be great if the spawn weights were balanced properly. Extended requires most jobs to be redone simply to not suck.

Extended is fine primarily because the reasons it’s bad are purely the fault of the core game being a bit shit at the moment.

Dynamic is bad because it’s realistically not helping anything by adding more antags blind to the state of the round.

Heretics are a vastly inferior one-dimensional version of traitor. There is only one thing they can do and that’s kill everyone. They’re also very weak compared to other antagonists, but become downright overpowered if they kill enough people. This encourages security to validhunt them.

Extended has no driving force behind it. Nothing happens and most jobs have nothing to do. It doesn’t encourage good RP, it encourages the worst kind of RP where people just textdump backstories at each other. At its best, RP is telling a collective story, and a story with no conflict or setback is usually a terrible one. Alternatively this mode can spiral into a griefing match as players self-antag out of boredom.

Wizard allows one player to powertrip at the expense of everyone else. Either the wizard is bad and dies immediately or they drag the round out as they kite security around the station killing everyone. Due to their ability cooldowns and incredible burst damage, wizards are mostly forced to play as a hit and run character with one hit kill abilities, and it’s no fun to play against.

Blood Brothers is very frustrating to play. Your teammate is often more of a liability than a help and there are far too many ways for you to just instafail that are out of your control. IAA is a total mess. While it is better than BB, both are outclassed significantly by incursion, which implements the concepts behind both game modes far better than either.

I hate all conversion antags equaly.

Extended - Its just a training wheels round.
BB - Lesser Antag
IAA - Traitor but you cant work with traitors 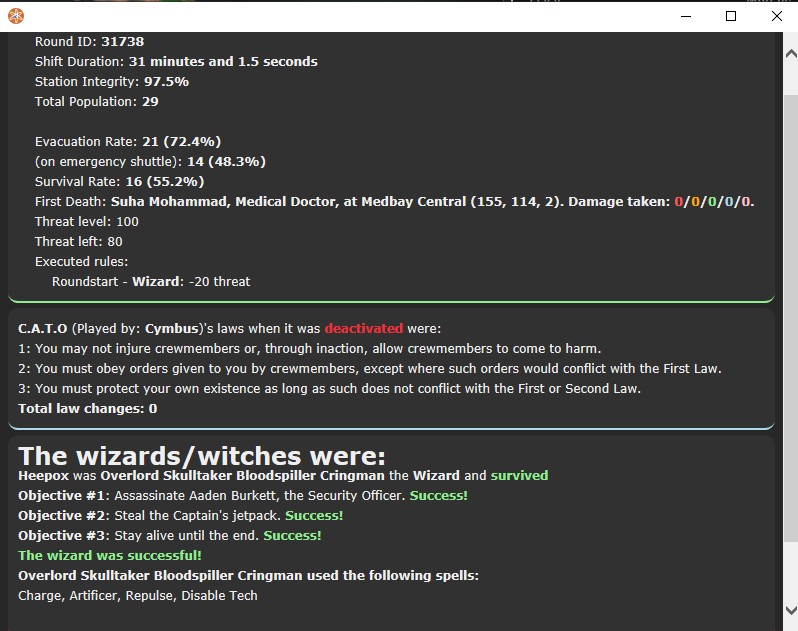 wizardAnypercent798×631 29.9 KB
Kinda like this but instead of killing the station in roughly 20 minutes and turning them into skeletons servants or constructs they fail to antagonise?
(Necromatic stone, Staff belt)
Wizard: I AM THE DANGER!
Ausar August 12, 2021, 5:50pm #20

I heard somebody said that dynamic midround spawn is bugged? is it true?