Offender’s In-Game Name: Veyl (I forget the number count at this point)

As RD, let a player remove items off of another Roboticist that was slated to be fired, but instead was left SSD in a hallway.

Also, carded an AI and left it in their office console for 10-15 minutes while they were in other parts of the station, then left a fully intact AI in maintenance around other players.

To start, this isn’t a thinly veiled report at the other people involved. This is purely concerning my own actions and how they could have been better handled.

To begin, I latejoined as RD and was told over command radio that my roboticists were making a second AI. I get to robotics and two roboticists (one who is since permabanned) have MMI’d the clown and put them into an AI core. I tell them this is not authorized, and that I intend to fire them both.

I grab a secoff to help me, and I fire the first roboticist. In the middle of that, the second roboticist says they need to SSD. I immediately lower them on my priority list. I drag them into the hall, and leave them there (primarily to be dealt with later, second because I know the first roboticist is mostly the one at fault)

Later in the round I promote a janitor to roboticist. On the way from my office to robotics, he stops and “loots” the SSD’d roboticist who is still in the hallway, saying they “won’t be needing this anymore.”

I say “Fair” and let it happen. This is, in hindsight, very bad conduct, as the player returns 20 minutes later, swears over comms, goes into maintenance and SSDs again. I am not sure how I should have handled that, but I know that was extremely poor conduct as it was.

This is the issue I am more dissatisfied with.

I genuinely don’t know how I should have handled this, but I essentially griefed this players round. The first AI doesn’t approve of the clown AI, so as soon as I arrive I card the clown and bring him to my office. I tell him I’ll be back to deal with him as soon as I sort out the roboticists. This turns into at least 15 minutes of the clown AI being stuck, in my office, unable to move or talk over radio.

Eventually I get back to him, and give him two options: be borged, or return to flesh. He refuses both, and demands to talk to the Captain. I say, okay, fine, let me go talk to him. And I leave him in my office again.

I forget what happened next, but I know I was unable to get a response from the captain. I eventually come back and make the clown’s decision for him; to return him to his body. I throw him on the card and head back to the vacant AI core, and start to figure out how to un-MMI the clown.

A radiation storm happens, I grab the core and run into maints. I’ve never tried to un-AI somebody before, so it takes a few minutes of tinkering. In this time, we end up in an abandoned room with a half dozen other players all demanding clown AI be restored.

Eventually I figure out that you can’t un-AI somebody, they’re permanently stuck that way. I give up, throw the clown back into the AI core, and leave him in maints with the crowd.

So here, generally, I have absolutely no idea how to have handled that. But I know that leaving somebody on a card, imprisoned in the RD office for a good portion of the round, is wrong, and leaving a fully intact AI near a group of people building what was later revealed to be a rage case was an even bigger mistake. I’d be reporting this if it was another person playing RD, so here I am.

Advisement and input would be appreciated.

this may or may not be peanut posting but damn, i’ve never seen anybody report themselves. that’s mad based. i don’t have any input or whatever because i’ve litterally NEVER played sci but damn. you gotta have some chest hair to pull that off

why the fuck would you report yourself lamo

And as outlined in the first and last lines of additional info, I am seeking input on how this should have been handled

Hey Veyl! I’ve definitely been in similar situations with unathorized ais as captain or acting cap. It always feels bad to round remove whoever got ai’d in the first place because you can’t remove the mmi after it’s been made. Ideally the best you can do is card the ai and force them into a pai type role, or give them a new specific set of laws making them have to listen to the original ai. If there’s an explo crew it might be fun to give them the ai because generally they can be very helpful towards each other. Or maybe putting it on mining and making it the mining ai?

I will say you probably don’t have to worry about it as much in this situation. Making unauthorized ais is against sop, and is generally kinda rude player behavior if there IS already an ai. If the clowns round was ruined because they let the robocists talk them into becoming a very illegal ai then that’s a little bit their own fault and they kinda just have to deal with the ic consequences of their actions. The ic decision would have been to just decommission them the first chance you got, but it sounds like you went out of your way to keep them in the round instead even if it wasn’t how they wanted to be in the round.

As a head of staff sometimes that means being “the bad guy” because you have to enforce rules like this and ruin someone’s idea or joke or round because it’s your job to enforce sop even if your staff thinks it’s dumb or unreasonable.

The fact that you chose to self-report is pretty indicative that you didn’t have malintent. I’m only a moderator right now, despite what my title says, but still.

Letting somebody loot an SSD is bad but not incredibly bad - so, oh well. They were SSD and were going to be fired anyway - assuming they went SSD upon being fired, I doubt an admin would object to you removing their job-specific items and returning them, but tomato tomato.

Unauthorized AI is not allowed per your SOP, so trying to get rid of it is perfectly within your jurisdiction - but, for future context, the image shows how. 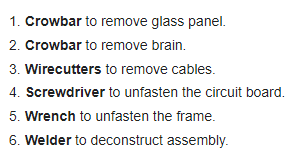 I believe you can return them to their body, but I’m not 100% sure. I wouldn’t beat yourself up over it too hard or anything, though - the worst that this is probably going to be is a slight note.

I’m not 100% on this, but I believe the issue is that while an AI core is inhabited, it can’t be deconstructed. Or if it can, there’s a different method I’m not aware of.

AI Core with active AI: Crowbar damaged AI via attack, and did not start deconstruction.

AI Core with no AI: Crowbar popped the panel and started deconstruction.

In the very short in-round time I had to make a conclusion, my belief was that an AI cannot be deconstructed unless the AI is carded. And if the AI is carded, the soul will inhabit the card, not the brain. So even if I pulled the MMI and popped out the brain, there was no way to get the soul back into it. I don’t think it’s possible, but if I’m wrong I’d really like to know.

EDIT: But if that assumption is correct, my only options are 1) leave it as an AI, 2) card and wipe, round-ending the player, or 3) carding it and just carrying the card around.

Please close this strangest of reports

Yeah, after doing some more experimenting I’m 100% that you can’t un-AI somebody. It’s permanent. Would require adminbus intervention, so I’ll keep this in mind. I’ve concluded the answer to my question has to be “just ahelp it”.

I know what to do better for next time and that’s all I wanted, so this is free to be closed. Thanks for the input everyone.

I tell them this is not authorized, and that I intend to fire them both.

This may be just your way of telling the story, but you should perhaps ask them if someone before you authorized the project?

Later in the round I promote a janitor to roboticist. On the way from my office to robotics, he stops and “loots” the SSD’d roboticist who is still in the hallway, saying they “won’t be needing this anymore.”

Generally, you can take stuff belonging to that job when you’re firing a person. This means, unless he took something personal, I wouldn’t necessarily call it breaking of the rules.
Still a dick move to do it to the ssd person, which you should’ve taken to cryo.

The second portion of the report seems like game just being a game. Random events happen and the clown should be aware that being AI’d by fishy roboticists has it’s own consequences.
You could’ve handled it better, probably leaving him in the maints or the office wasn’t you brightest idea, but we don’t overthink our every step during the game.

Again, if you realize you did something wrong and pinpoint this exact moments, you should also realize that those “misdeeds” weren’t committed due to malice, so I’m not comfortable banning you.

My verdict?
Skill issue. If you genuinely think you should’ve been banned, ban yourself, go outside, touch grass, meet some people.