Incident Description: I wasn’t observing for most of it, but from what I could gleam from the chat logs after I went into cryo the Head of Security (Jimmie Jefferson) and Aden Finlay (Warden) were torturing the pirate they captured by hanging him next to his dead crewmate and taunting him with the fact they were going to kill him, that they killed his crewmates, etc. Not allowed by space law, and there was a recent announcement on discord saying as much so they should have been aware.

I saved a couple pictures of what they were saying to him, and to me it looks pretty obvious the pirate wasn’t exactly comfortable being tortured. The following text isn’t in any particular order I just control F’d for anything that looked relevant. 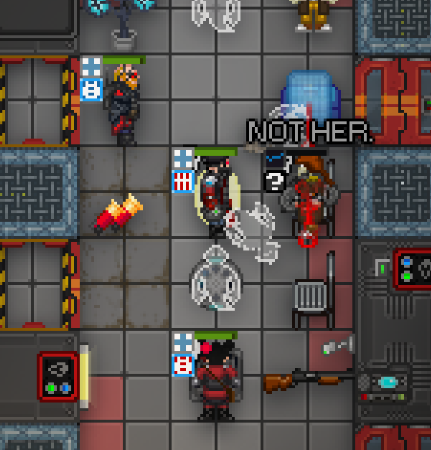 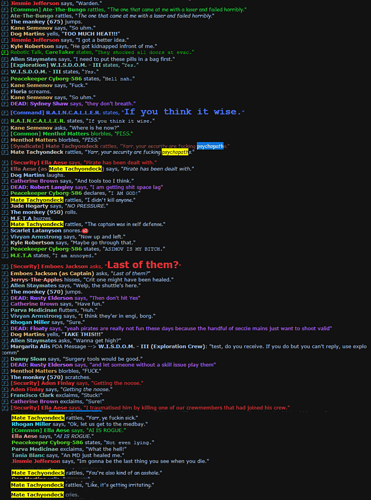 Additional Information: The pirates ckey is smm1013. Also peep what MalevolentBacon posted below, seems to be more to this story.

IIRC Aden is a moderator so this will be an admin report, so this might be better off splitting into two reports.

I might be wrong, but I believe this isn’t an admin report as it doesn’t concern the admin conduct. I think any potential consequences to their status as a staffmember are going to be handled separately by the staff, based on their behavior as a player. Nope, apparently staff report, ignore me.

There is a player report up against another moderator in a similar vein to this one that had to be bumped to an admin report just because it had a moderator involved.

I was observing that round and I thought it was fucked up. The hanging/execution was just so mean-spirited when that guy they were hanging had been the last pirate for like 30 minutes.

Oh yeah, and the Captain was validhunting this last lad too completely by himself by actively searching for the pirate ship, he even blew up a fuel tank and somehow managed to die to the last pirate. The pirates were really not such a massive threat to warrant such brutality.

I was a pirate also this round, not the one hanging or the one being tortured. This round was really not great.

So basically, me and the captain pirate fluked pretty hard, and we died. nothing too bad there, its how it goes. My stakes as a pirate are gone at this point. From that point on, I watch from dchat as the Warden personally gets the gulag shuttle and chases down the single now not a threat pirate. The Warden, Aden Finley, the guy who SHOULD be sitting in brig doing brig stuff and letting his officers do work instead of doing it himself. The Warden is NOT a security officer. He might be higher ranking, but he is pretty similar to the Detective in this regard. Meanwhile, the captain is scooting around space with a jetpack looking for the pirate ship also (the Captain was Emboes Jackson). The Captain would lose in the 1v1 versus the pirate, and the pirate would even let someone come and take the captains corpse back to the station. Its pretty clear that the pirate no longer wants to fight. Ella Aese (or however you spell it) takes the pirate captain’s headset (Using contraband is against SOP, the headset is contraband) and uses it to taunt the remaining pirate for a solid 30 minutes.

When the HoS finally arrives, he takes over the hunt, and pretty quickly catches and arrests the remaining pirate. Then, they take him, and hang him full well knowing this wont kill him. Just as a kind of fucked up joke. They hang him for however long it takes for him to break out of the noose. They berate him during this entire period. By the way, I forgot to mention that there was actual crime happening on the station. A contractor starts breaking shit around this point, but stuff was happening on station before then too, such as the chapel being plasma flooded by a griefer, and someone running around with a flamethrower. Fuck that, single pirate is more important. After the Pirate breaks free, they cuff him to a chair and continue to taunt him for a period. I don’t know when it ended, because at a certain point, I stopped watching.

Added an extra tidbit at the end saying to look at what you just said, because that does sound pretty bad.

I might be wrong, but I believe this isn’t an admin report as it doesn’t concern the admin conduct.

All reports of misconduct against an admin (even if they were deadminned playing the game) are treated like a staff report and get handled by one of the Heads. Admins are expected to know the rules and follow them and are held to a higher standard than average players.

Moving it to the staff reports category as it involves Tamumus.

I was playing raincaller the AI this round and would like to state that:

1: The one pirate was treated as a threat, as they were flying the shuttle to different spots around the station. We believed he was looking for targets of opportunity.

2: there were very few security staff during the round, at round start I believe there were only the detective and the warden, which might explain why the warden felt like he had to step in personally as acting HoS.

Though I will say that at least one security officer joined after the pirate raid started, I believe it was Jerrys-The-Apples the lizard.

The plasma flood greifer also used a flamethrower to overheat several corridors…
Why do flamethrowers even exist at this point.

Also FYI, there was an update to Space Law that outlawed interrogations with excessive force.

Yeah so.
Why was i hunting the pirates as warden?
Because there was only one other officier at this Time.
Once we got more jackboots i went back to my posting.
As for the pirate…
What do you want us to do? He got to RP with sec instead of being thrown into perma/shot to death on the spot.

I kinda dont get it.
The pirate got RP, and managed to lash out at the NT psycho before going out in a blaze of Glory.
At no point did he asks us to stop in looc either, wich would very much have stopped us.

Oh, and about sec focusing on the pirates.
Three seccies at the Time pirates arrive: the det, Jerry and me(plasmaflood happened later IIRC).
We just cant deal with all stuff at once.
Once shit calmed down and more seccies arrived, we dealt with the rest.
But IMO, pirates are more of a threat than someone opening a plasma can(they get a ship, explosives and guns, duh).
Moral of the story? Play sec, so there is Manpower to deal with more than one issue at once.

I don’t think you can consent to being tortured. You can’t ERP just because some other person consents to it, ERP is still against the rules so I don’t see why you should be allowed to torture someone even if they “consent” since it’s still explicitly excluded in space law. You should know this as a moderator since the discord had an announcement ping two weeks ago saying this explicitly.

I put consent in quotation marks because as you can see in the pictures I provided, the pirate emoted crying and explicitly said “You’re also kind of an asshole” and “Like, it’s getting irritating” in response to the situation they were in. That does not seem like consent to me.

Nowhere in this rule does it limit people as being only involved parties.

This is the correct interpretation’

(no judgement on report yet, that’ll take actual looking into)

Month plus bumparooni. C’mon this should be easy right? Clear pictures showing what happened with text, no one disagreeing with what happened.