Incident Description: Freed personal AI stalked a specific player and posted verbal harassment newsreports directed at them for most of the round, as well as engaging in failRP and fourth wall breaking.

Additional Information: The hurt party has commented about it on Discord, stating they did not take it well, being a more sensitive person to these things, and has expressed apprehension to play on Sage again due to this incident.

This is completely unacceptable behavior and something that I don’t want to see on Sage. Stalking and Harassing someone to this extent is not okay.

Was here for this. I have no idea why they did it and no reasoning would justify it anyway.

If what said here is true, they deserve a server ban.

21 days later, as all reports are lost to the sands of the forgotten 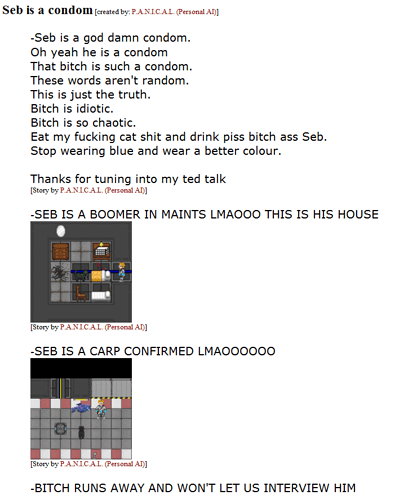 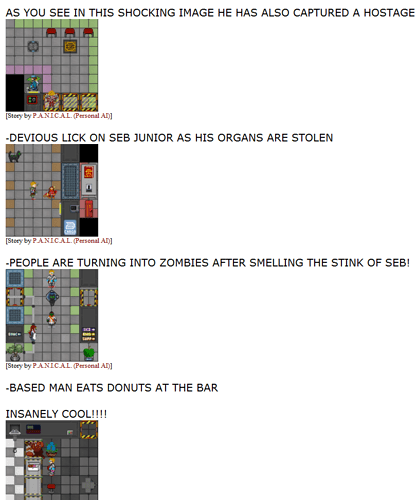 Summary of Relevant Events
PANICAL is downloaded and bound to David Lars
David Lars disconnects
PANICAL is picked up by Rick Copeland, a Medical Doctor
Rick Copeland tells PANICAL to follow Sebastian Alvarez, the CMO, without shutting up, ever
PANICAL harasses Sebastian
Sebastian uploads a law to PANICAL instructing him to remain out of sight of the CMO
PANICAL continues to harass Sebastian

I am of the opinion that this harassment is of a level that is inconsistent with the behavior we expect of our players. PANICAL could have fulfilled the order by being the CMO’s chatty assistant, for example, in addition to many other methods that would have fulfilled both the order and stayed within the rules.

For this reason, I have applied a one day server ban and seven day pAI ban.