Offender’s CKEY: Unknown for both chemists, BoOuf.yUh for the Xenomorph

Rules Broken: Self Antag, all three of them

Fahtah Stahnkir: I decide to observe the round, start orbiting players and notice that Imhotep Richblood and SlipnSlap are on two different chemistry lockers that are locked, one inside the Plumbing area (Corg station) and another on a maint office very close by ‘‘odd!’’ i think, upon observing the players i notice they’re both fully stripped and then i saw the Chemist sending a message through the clown PDA, i can’t recall the specifics but it was inciting to fight, i also found out that they belongings are both on a same tile in a maint corridor next to Chemistry, eventually Imhotep comes back from being SSD and gets lucky enough that a janitor passes by and drags the locker in front of chemistry, where the other chemist open it, but before that Fahtah, fully aware that Imhotep was back, just silently drags it back deep inside the plumbing area and places it next to the locker that was helding clown, eventually the other chemists releases Imhotep and the other chemist tries to drag away the clown locker, Imhotep decides to throw hands at him, kick his ass and kills him, eventually security brigs the chemists but he gets free because he said ‘‘an assistant tided into his office and that’s why i did it’’ which is of course, a lie, eventually a TB fungal disease breaks out, killing him so that’s the end of his story.

To keep it short:
. Fully stripped two ssd players (i saw a third one stuffed on a cryo tube, naked as well, unsure if he did that too)
. Trapped them in locked chemistry lockers, one on his office(Plumbing area, very far from view) and another on a maint room next door
. Used said PDA’s to send messages (i don’t know what kind of messages he sent besides the clown one)

The first offense i saw on this player was a little bit later, when the situation with Imhotep got solved, Imhotep was standing getting crushed by a candy machine when he requested help from the chemist to lift it up, the chemist said ‘’ One second’’ injected him something and upon scanning him it was like 10u of Mindbreaker toxin of course he said somehing along the lines of ‘‘Have some LSD’’

By the end of the shift, he was being held on brig shuttle, and when i asked the security player he said he shot another officer with a syringe gun for no reason (content of the syringe are unknown) and upon arrested he was arguing that ‘‘he was allowed to carry a syringe gun’’

I also noticed a scientist that was carrying like 10 pills of Meth, i’m inclined to believe based on the few beakers that i scanned off his desk that the chemist provided them the meth.

Pretty short, they ate a maint pill, became a Xenomorph and starting making resin floor on maint, all good, the thing is that i saw them slash a crew-member for no reason almost critting them, before being scared away by the shooting of the Bartender sadly i don’t know if they slashed anyone else since i rolled Revenant but logs could confirm if they killed or harmed anyone else, shuttle was arriving and didn’t saw them on it so they fled.

(We also had an outbreak of TB fungus and we all agreed it came from a maint pill, even if it was her i doubt we can held them accountable for the bad RNG of the pill)

Additonal information:
Pictured here you can see the moment where they were dragging the locker with the clown away, still without saying any word (they only spoke after being placed on a cell)

You can see all the clown and Imhotep belongings on the maint corridor.

For reference on the locker placement, the one where the Clown was, was just above where Imhotep character is, the locker where Imhotep was was a little bit to the right on the maint corridor and then down basically right next to the medbay security office. 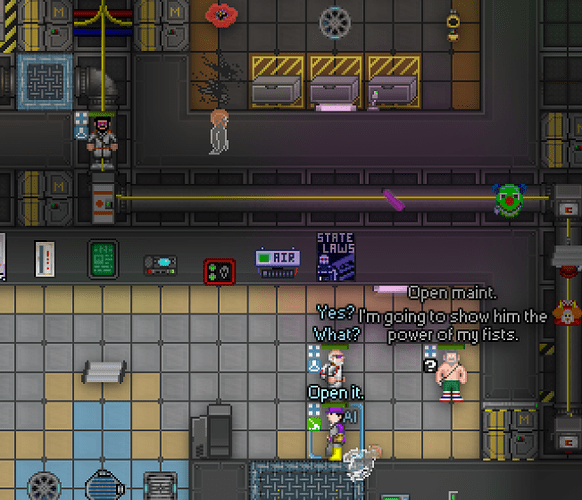 By the end of the shift, he was being held on brig shuttle, and when i asked the security player he said he shot another officer with a syringe gun for no reason (content of the syringe are unknown) and upon arrested he was arguing that ‘‘he was allowed to carry a syringe gun

I was the secoff that arrested him. Arrived two minutes before the Evac shuttle docked, got my gear and made sure people got to evac safe. When the shuttle departed I heard disabler shots, went to go see what was up and saw another secoff chasing around an assistant who shot back with a syringe gun. So I knocked him down with a disabler and cuffed him. Also confiscated his syringe gun because he used it to assault a security officer. When apprehended about it, he said 'chemists can have the syringe gun". I then told him they could only have it with CMO’s permission. He was also wearing a gas mask, insuls and had an assistant’s ID.
And neither of the chemists were antagonists. 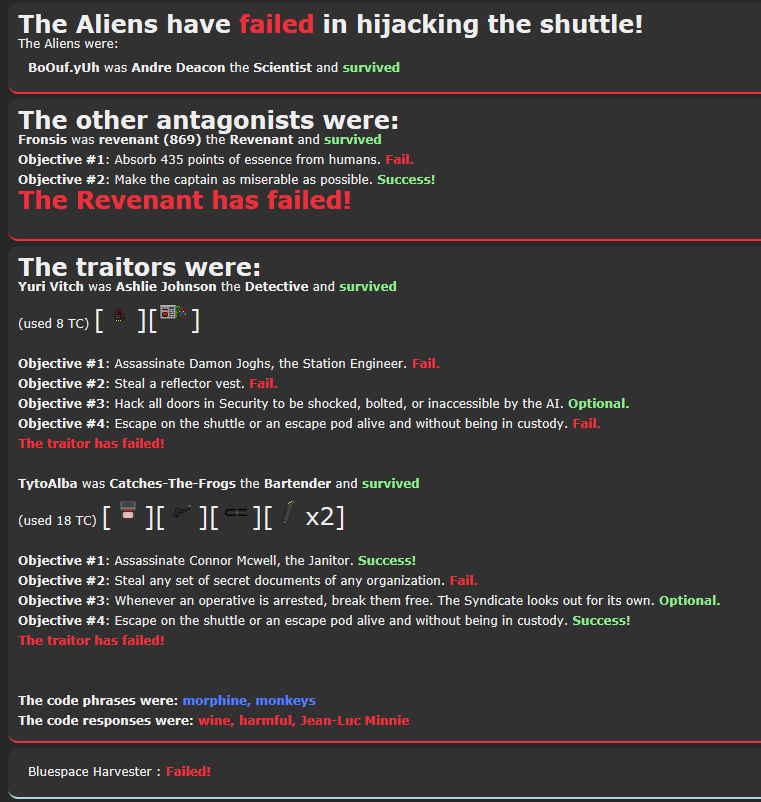 Speaking of hans, i ahelped him yesterday for shopting napalm death mix syringes at people on the shuttle way betore it landed as a non antag. No admins got to it in time sadly.
He had been prepping them for awhile.
Unsure if they can check tickets for a round ID in discord

So if you are transformed into anything like monkey, xeno or a creature but no text informing you of new objectives you are still non-antag am I correct?

Exactly Melekavic, for example if you’re a miner that gets Gluttony Blessing (You become a Morph) you can’t just go around eating the armory and bodies like the actual antag morph or if a Wizard makes you a syndicate borg/any other type of hostile mob you can’t go antagonize, at best you can act in self-defense against the offender but without going to extreme measures.

For more info i suggest you read the Escalation Policy

As Bungo pointed out, the chemist responsible of the locker incident got banned the next round after i ahelped them because of the bungo stuff (Round 40689) though i’d like to also add that Hans Fisherkaan spent most of the early shift (As a scientist) making Meth again in the middle of R&D and eventually brought back an Ash walker to the station (they didn’t cause any trouble) while walking with a mining hardsuit

@Bungo If you can remember any of the OOC words they were said maybe admins can check that out, if not it’s sadly anecdotal which doesn’t work

Speaking of Hans, I also saw him spending the first half of Round 40689 making meth in the middle of R&D; I was the AI, and I was concerned with his chem lab in an unsanctioned area. After observing his work and consulting with Security about the harmfulness of methamphetamine, I shut down the R&D APC to follow Asimov. Security convinced me to leave the APC on as long as he included mannitol in his pills, and instead of doing that, he tampered with the APC to remove my access to it. All as a nonantag scientist. (He did include Mannitol in his next batch after I reported this behavior to security, and then promptly fucked off to lavaland.)

I don’t think he’s here to roleplay in good faith.

Not sure if he did say anything ooc. But j remember making the ticket it should he in discord somewhere with the round id i hope

Another one for hans, 40852.
Has a sryinge gun with lexorin and mute toxin syringes, and built a teleporter that im sure he used to bomb chemistry seeing as i didnt touch any chems. The teleporter was set exactly where the explosion took place too.

Also built his own chem dispenser and such probably for those syringes.

Was dealt with by mega and seems to have been yeeted

Right…so…sorry this took so long.
I had kinda a weird last couple weeks.

The Chemists are already permabanned for griefing.
Step one complete.

As for the guy transformed into a Xenomorph: it seems they were being a bit LRP throughout the round and after the transformation, they made a MentorHelp that went unanswered that suggests that they really did think that they were now an antagonist.
They have a clean record so I’ll give them a note about it to clear up their confusion and let them know that they need to reread the rules about roleplay.

As penance for my lateness, I’ll do my next assigned report on time and then I’ll grab another one or two.