How long have you been playing ss13?: Probably a little around a year now.

Who vouches for your experience (if anyone)?: Nobody I’m aware of.

Game Experience (More Detailed): I only have around 150 hours on bee as right now. Although most of it has been in the past month, month and a half. I am familiar with ss13 and played on TG for about 370 hours before moving to bee. While they do have differences it’s still helped me a lot. More info on what jobs I know.

Supply. I know of a few of the more notable crates not that many though. I am a pretty good miner and can kill ash drake almost always if I prepare enough (Not quite beaten bubblegum yet though sadly.)

Science. I know what nodes to get really early although I’m not entirely sure the names of a lot of the more mid tier tech nodes. In terms of toxins, never really done a lot with toxins but I can make a small bomb. I do xenobio a good amount and know how to get a lot of out it. I’ve made rainbow slimes before. I am also aware of how to do nanites. For robo I know how to make a borg and mechs from memory. Know how to reset a borg, upgrade them replace their battery stuff like that.

Engineering. I know how to safely make a tesla/singulo. I know how to do a pretty small scale version of fusion (Not sure how to do can fusion though). I understand how pipes work and how to improve atmos. I can make a stable pure O2/CO2 SM, still trying to refine the setup though.

Security. Not much to say on sec.

Service. The only real service roles I play frequently are bartender and botanist. Don’t really like the others. In terms of botany I can make potency 100 death nettles, optimize production and all that good stuff. And with 3 other botanists I once accidentally crashed the server with bomb wheat, so there’s that. For bartender I usually just mix things to make cool flavor text. Not really useful but it’s quite fun.

Medical. For chemist I don’t have many chems memorized, I mostly just use the wiki for it since I rarely make the same the next round. Can make decent explosives and know not how to explode myself making chems.
I know how to play doctor quite well, when to cryo someone versus when to patch them up. Geneticist.
Pretty little experience with gene but I can get good things in a reasonable amount of time. Viro’s pretty fun, haven’t really made any death plagues but I’m good at making healing ones and reaching their stat thresholds.

Not a whole lot to say about command since it’s pretty much just a head of staff version of another department job. Although I do find myself playing command roles more often than not.

Silicone. Don’t play borg often. Been playing ai recently and have a pretty good understanding of how to interpret laws and just overall not be a dick and help the crew. 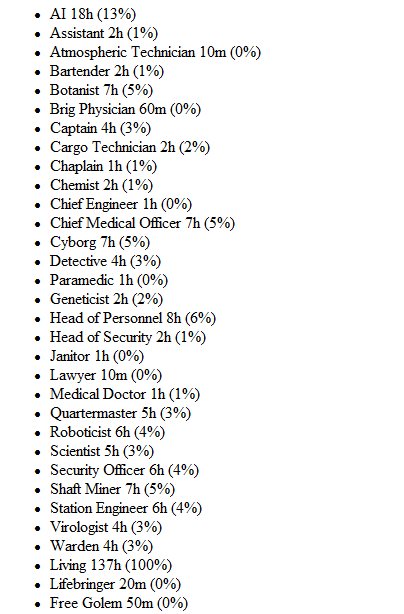 Hope I didn’t ruin the format with my wall of text. 150 hours is probably a little low, If I need more that’s understandable. I believe I have a good overall knowledge of the game and have been very actively lately and I would like to help out.

He understands atmos and engi give him the mentor

+1, a bit low on the bee hours but he got the experience.

Are there any specific things that are commonly asked?

+1 pretty good, also I can teach you how to make can fusion if you want.

Is there any specific trick to it compared to just doing fusion in the burn chamber?

I usually put around 400 mols of c02 ( pretty sure it can be swapped with n2 but i could be wrong.), 400 mols of plasma, and 400 mols of trit. All super-cooled with a freezer. Then i get a second can with 50 percent 02 and 50 percent plasma. I take that can and use a heater to make it as hot as it can go. Once i unwrench the can becomes very hot. Then once its around 10000 i heat exchange the heat into the fusion can with the trit c02 and plasma. Then once i unwrench the fusion can from the heat exchanger it starts sending out nuclear particles.

I didn’t think about heating it using a burn mix, that’s pretty good.

I want more feedback on this.

Eh it’s fine, even if low on hours, seems like you’ve been playing a lot lately so you’ll hit 200 soon

Yeah that’s why I applied now, figured it wont be long before I have even more hours. Might as well apply sooner.
More like 170 now too.

Also bump cause been 3 days.

+1 Dude knows his shit, and the more people helping out the less knowledgeable players on the server(s) the better.

Bump. Been another 3 days, eh?

@Caecilius you seemed to be handling some apps, can you look this over please?

Never, because I’m going to beat him to it.

Would throw a +2 in myself, but it’s kinda moot now.