Incident Description: No admin available for ticket at the time. I was a silicon with custom laws:

We had to follow orders but couldn’t harm crew, and in general we followed law three by doing pranks - AI would announce false flags, we turned on fire alarms, set off the Beer Nuke once, etc. Goofy borgs that didn’t harm. At the time I was in security making a round to see if any crew were being abused and to yoink a practice bomb for the beeping sounds it makes.

Enter Tyler. As Warden, asked me for my laws. I complied. 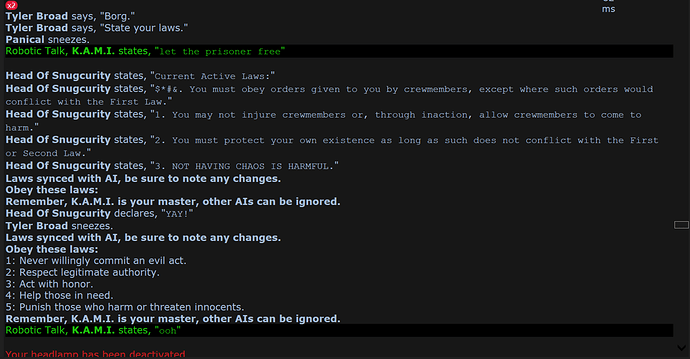 Then he immediately flashed and shotgunned me for it when it was not harmful or antagonistic. He continued when I stated my laws were updated to finish me off. He had enough time to cock it and fire again. 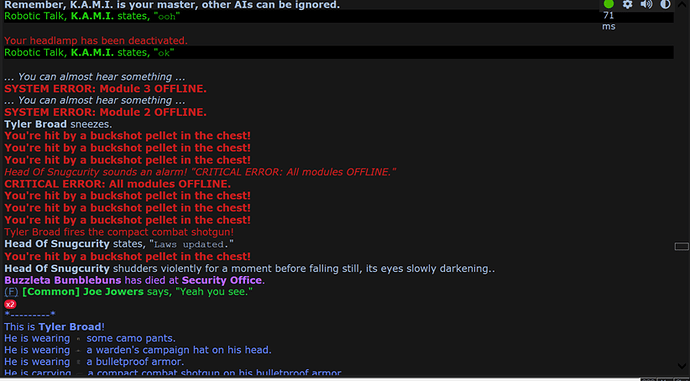 In Tyler’s defense he did delegate someone else to take me to robotics to reset me.

And then delegated it again to someone else but didn’t do it himself. Security officer Roger Draudy was a great - he found materials, rebooted me, and confronted the warden on their behavior. Warden said he killed me because he wasn’t taking chances. 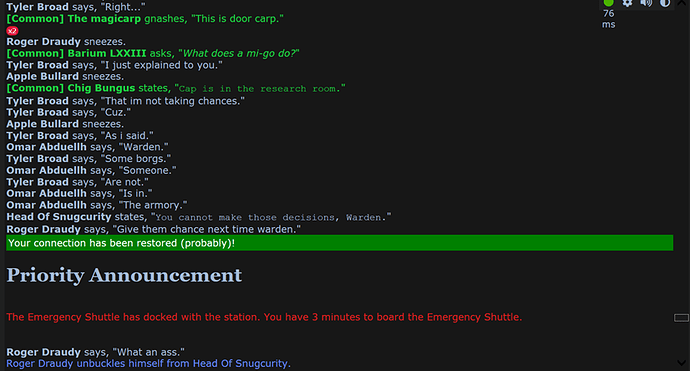 I don’t think that’s a good enough reason IC and his responses is prime shitsec behavior - you can’t just end a player as a precaution. It was worse that he was difficult about it when confronted. I’d have let it slide if they just apologized. It’s easy for me to come back.

At any point he could have responded to a potentially dangerous lawset with a flash and words. ‘Borg harm no one’ or anything to that nature. And if I were rogue and AI-synched… I’d come back with the same lawset. He didn’t care enough to verify - but he did care to double-tap.

Instead I think this was a warden who wanted something to shoot all shift, the shuttle was arriving, and they decided it was time. Should not be a security player.

Additional information: Tyler, I’m Head of Snugcurity! Listen to that name - you can’t kill me!

It is good enough reason. With the way this is defined, chaos takes precedence over all but direct injury to a crewman. You could’ve caused actual harm if it created chaos with this lawset and be in the clear.
You were essentially malf at that point.

Because not having chaos is harmful. Causing chaos prevents harm. Fulfilling law 1 that takes precedence over Ion law because of the way Ion law is worded.
Because when there is a conflict within the same law YOU get to choose which part takes priority.

Any harm caused after you do any of those is more distant than the chaos you’ve created [harm you’ve prevented] and so can be dealt with afterwards.

Disabling you and resetting you is not pleasant but it is within the bounds of acceptable, I feel.

This topic was automatically closed after 11 hours. New replies are no longer allowed.